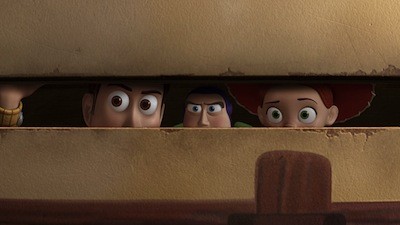 The 3 after the Toy Story title means Buzz, Woody, and the gang are back for a third go-round at getting lost and finding their way back home. Young Andy, who has virtually grown up before our eyes since the original Toy Story fifteen years ago, is off to college, and the boy has to make some decisions about the things he may or may not have outgrown. A mix-up lands his favorite toys, including a protesting Woody (voiced, as per usual, by Tom Hanks), in a daycare center. What at first looks like a heaven for discarded toys quickly turns into hell as the playthings are beset by toddlers and all their snot, spit, and whatever other goo they can get their underdeveloped hands on.

But it's not just the kids who are threatening the plastic family. The daycare center is run by a huggable, strawberry-scented bear named Lotso (Ned Beatty), who has a system for how he deals with new toys on the block. With a vain Ken doll (Michael Keaton) in the midst of a mid-life crisis as his enforcer, Lotso puts the guys in lockdown, and even does some evil stuff to Buzz Lightyear (Tim Allen). It's up to Woody to round everyone up and hatch a great escape so they can get home and back where they belong before Andy leaves.

If the plot of Toy Story 3 sounds familiar, that's probably by design. Pixar's latest sequel is easily the summer's most dependable franchise entry, but at times also its most rickety. The series has established a reliable formula at this point, and though it's perhaps one that proves if it ain't broke, don't fix it, the Pixar people still could have goosed it a little. It took forever to get the toys where they were going and set up the new peril for them to outrun. Listen, we know they belong to Andy, we know they get lost, at this point you can just dump them out of the box and start them on their merry way. 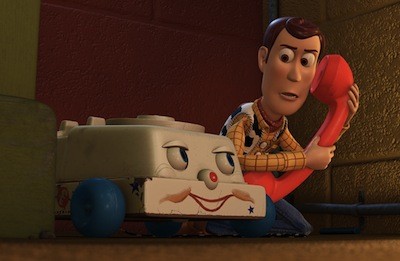 Toy Story 3 is directed by Lee Unkrich, who also co-wrote the screenplay with Andrew Stanton, Michael Arndt, and John Lasseter. I imagine it's the number of cooks in the kitchen combined with the pressure to keep the studio's hottest property aflame that caused some of the pacing problems. The film at times feels overstuffed with its need to hit all of our emotions, and though I admit I got a little misty-eyed at the end, the tearful good-byes went on a smidge too long. Leave some sap in the tree for the next guys, fellas.

Unkrich has been an assistant director on three other Pixar features, including Toy Story 2, and his greatest talent probably lies in his attention to detail. Every frame of Toy Story 3 is packed with smart touches, and it never feels like he's sticking stuff in just for the sake of filling the screen. This includes any new toys brought into the cast--each addition is there to serve a specific narrative purpose. Several surprises from toyboxes long past pop up to hit the nostalgia button in older members of the audience. (I, for one, forgot that I had owned the little telephone that ends up being Woody's jailhouse stoolie.)

Everything that moviegoers loved about the first two Toy Story films are all here. The characters are still endearing, and the jokes about the secret world of toys are still fresh. As is to be expected, the animation is flawless, and Pixar continues to innovate in leaps and bounds. There are backgrounds in the action climax that I would swear were filmed for real and the animated characters were just dropped in. The 3-D is largely superfluous, but there were some good multi-plane effects. The best parts of Toy Story 3 are when the cartoon is bending film conventions to its will. This is a prison escape picture, complete with a complex inmate infrastructure and all the horrors that come with. It may take a while to get the wheels in motion, but once they are, it's a thrilling dash to salvation. And the movie is also really, really funny--no warm-up was needed in the humor department, I was laughing from the get-go. The gags still have the ability to surprise even if the plot does not. 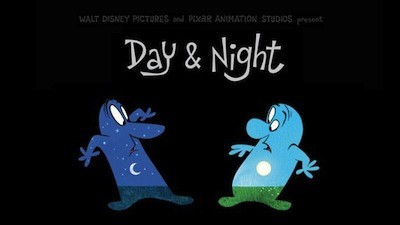 Regular Pixar fans will be happy to here that, like all their previous features, Toy Story 3 is preceded by a new cartoon short, and as is often the case, it kind of steals the show. Directed by Teddy Newton (who also voiced the telephone in the main feature), "Day and Night" is visually exciting and downright hilarious. It's also difficult to describe. Its tone and gusto reminded me of the experimental shorts Chuck Jones and Maurice Noble were sneaking under the Looney Tunes banner in the '50s and '60s; design-wise, the characters looked like the guys from the old "You Want It When" poster that used to hang in every dry cleaners and construction site HQ once upon a time. One of the characters is Day, the other is Night, neither of them speaks in conventional language...and you'll just have to wait to see the rest. Trust me, you want to be at the theatre on time!

In all honesty, I feel kind of dumb complaining about Toy Story 3 at all. I had a good time watching it, so it seems even a stale Toy Story is still a hundred times better than the lukewarm leftovers so many of the other animation studios keep shoving across the table. Pixar still has the digital animation market cornered, and as comic adventures go, this dependable old Toy has life in it yet. 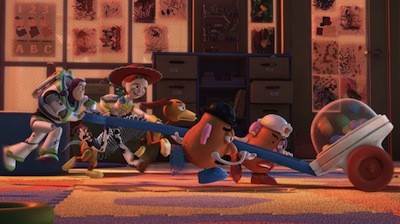