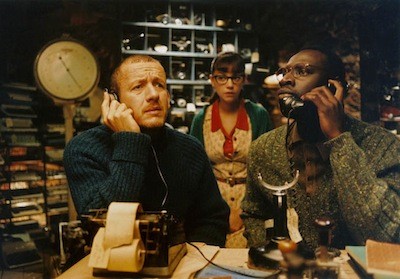 It's been six years since we last had a Jean-Pierre Jeunet movie, and that's way too long to go without his particular brand of whimsy. So thank your lucky stars that the director of Amelie and Delicatessen has finally returned to our screens, bringing us an insane, boyish romp called Micmacs. Loosely translated, it means "non-stop madness," and though the film is not as gonzo as all that, it is pretty much fun from start to finish.

Micmacs opens in North Africa in 1979, and a member of the foreign service dies trying to defuse a landmine. He leaves behind a son named Bazil, who grows up to work in a video store and get himself shot in the head while watching The Big Sleep. The bullet doesn't kill Bazil (played as an adult by Dany Boon), and the surgeon treating him decides to keep it in his skull rather than remove it and risk turning him into a vegetable. Bazil returns to his life to find his job and apartment gone, and living under the threat of a death that could come at any time, he starts existing day to day.

Bazil's wanderings lead him to an old crook named Slammer (Jean-Pierre Marielle), who in turn leads Bazil to a junkyard gang led by Mama Chow (Yolande Moreau). The group salvages junk and makes it either work again or into something new, like little dancing mice puppets or minimally functioning robots. Amongst the group are a former human cannonball named Francasse (Jeunet-perennial Dominique Pinon), a girl named Calculator (Marie-Julie Baup) who can tell you the properties of any object just by looking at it, and a contortionist (Julie Ferrier) that takes a keen interest in Bazil. He calls her Elastic Girl.

On one of his salvage trips, Bazil discovers that the weapons manufacturer that built the mine that killed his father has their main office right across the street from the one that made the bullet that is still in his brain. He decides to get revenge on these two by pitting them against each other. His gang insists they go along with, and the rest of the movie is a series of escalating corporate pranks. The group pulls long cons and enacts detailed machinations, small nods to Rube Goldberg, that frustrate the arms dealers' plans and put them at each other's throats. 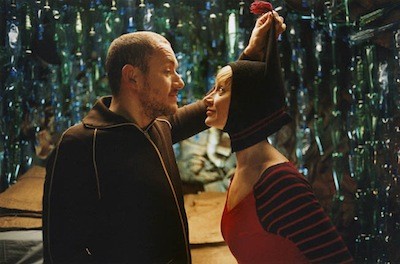 Though Micmacs has less heart than Amelie, fans of Jeunet's early movies will appreciate that this film is much closer to Delicatessen and City of Lost Children in tone and design. The director and his co-writer Guillaume Laurant have an astonishing knack for creating a quirky world that moves and operates in ways only they could possibly imagine, and yet the oddness and creativity never feels forced. Extreme angles, quick camera moves, and slickly polished art direction are all hallmarks of a Jean-Pierre Jeunet movie, and there is plenty of all of that here. The dumpster-diving misfits are kooky, but Jeunet's love of interesting faces means the casting is always just right. The actors are believable as outsiders and weirdoes because they don't look like regular movie performers.

Dany Boon is a wonderful find. He is marvelous as Bazil. His silent antics and Jeunet's elaborate sight gags are reminiscent of the great work of Jacques Tati in the Monsieur Hulot films. These kinds of comedic characters get by on their bumbling optimism, and though Bazil is getting revenge, he doesn't have a mean bone in his body. His quest is on the side of right, and despite the heavy-duty hardware being tossed around, Jeunet is careful to stay away from gore. The one big explosion in the movie is revealed to have caused no casualties. In Micmacs, only the bad guys kill. It's a bit Looney Tunes, with Road Runner turning the tables on Wile E. Coyote.

The same optimism that makes Bazil so likeable also lends credibility to what could have otherwise been a strained pro-peace, power-to-the-people ending. In keeping with the cartoon tone, Micmacs ends on a bright and sunny day. It kind of made my day at the same time. It's always nice to see a movie where the main goal is to make the viewer smile, and even nicer when that movie is actually capable of doing it.