Treasure of the Sierra Madre, The

Warner Bros. // Unrated // October 5, 2010 // Region 0
List Price: $24.98 [Buy now and save at Amazon]
Review by Stuart Galbraith IV | posted October 16, 2010 | E-mail the Author
Movies don't get any better than The Treasure of the Sierra Madre (1948), a thrilling adventure-drama proudly ranking alongside director John Huston's best films: The Maltese Falcon (1941), The African Queen (1951), Moby Dick (1956), The Man Who Would Be King (1975), and The Dead (1987) among them. It also belongs in that tiny group of black and white movies that, unfailingly, enthralls people who normally avoid black and white films - indeed anything more than ten years old. It's nearly a perfect film* and has it all: unforgettable characters, high adventure, suspense, plot twists, a great musical score, plenty of action, beautiful dialogue, humor, incredible irony - all in a story wrapped around a huge fortune in gold.

Warner Home Video's Blu-ray presents the film in a strong high-def transfer with decent detail but even better blacks and contrast. The extra features are excellent - including two feature-length documentaries, one on Huston, the other on the film - but we've seen it all before and nothing has been remastered to high-def. 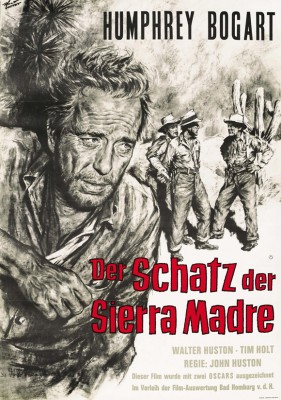 Set, vaguely, in 1920s Mexico (though 1940s sedans appear in a few shots), Fred C. Dobbs (Humphrey Bogart) is an American down on his luck in Tampico, jobless and reduced to sleeping on park benches and putting the bite on wealthy American tourists (notably the film's director, John Huston, in an amusing cameo). He and fellow American, Bob Curtin (Tim Holt), get a backbreaking job working for shady Pat McCormick (Barton MacLane), but he stiffs his workers and blows town with their money.

The pair meets Howard (Walter Huston, the director's father), a grizzled but experienced prospector who in his long life traveled all over the world earning and losing several fortunes. He's itching to match his grubstake with a few partners and, perhaps for the last time, search the wilderness for a rich vein of gold.

Later, Dobbs and Curtin happen upon McCormick, and in one of the screen's most brutal fights up to that time, beat him senseless and take the $300 owed them. A short time later, Dobbs learns the seemingly worthless lottery ticket he bought from a Mexican boy (Robert Blake) has paid off: the extra $100 clinches the deal, and the three gringos head deep into the mountains, unforgiving desert territory overrun with marauding bandits.

Dobbs and Curtin had planned on going at it alone, fearing the old man would be too much of a burden, but the talkative old-timer proves far pluckier than the physically stronger but inexperienced pair who, easily discouraged and quickly exhausted, are soon ready to pack it in. In the film's most famous scene, an amused Howard berates them mercilessly: "Let me tell you something, my two fine bedfellows, you're so dumb, there's nothin' to compare ya with. You're dumber than the dumbest jackass. Look at each other, will ya? Did you ever see anything like yourself for bein' dumb specimens?" But soon enough they find gold - and that's where their troubles really begin.

The film is classically "Huston": the thrill of the quest, rendering its eventual failure almost irrelevant; stubbornly independent men bonding with like-minded souls; the American (or British, or Irish) exploring uncharted, foreign soil. And there are elements of Huston's greatest skill as a filmmaker: visually adapting internal, psychological conflict, in this case the most famous work of the notoriously reclusive and mysterious B. Traven.

Bogart is excellent as the alternately cruel (note the scene right up front where he viciously slaps the Mexican boy) and generous Dobbs, whose greed and paranoia get the better of him once he strikes it rich. But it is Walter Huston's Howard that everyone remembers, and with good reason. It's one of the all-time great film performances. Huston is sprightly and talkative (it's almost like his performance is time-compressed while the others play at normal speed), but also a keen observer of human nature. Though a chatterbox much of the time, watching the film again I was taken by how much of the film watches Howard listening to others, quietly sizing them up. Curiously, the film has no clear, single protagonist: Dobbs is absent from the last scenes of the film, and Curtin, not Dobbs, undergoes the more dramatic character arc, learning much more about himself and human nature generally than Dobbs.

Memorable scenes and dialogue abound: the reading of the letter from Cody's wife, Howard's observations about the impact of gold on men's lives, his reviving of an Indian boy injured after falling into a well, Dobbs and Curtain's confrontation with McCormick, all of the scenes with the bandits, especially the sinister Gold Hat (Alfonso Bedoya), and the unforgettable epilogue. A masterpiece.

Treasure of the Sierra Madre is presented in its original 1.33:1 theatrical aspect ratio with the opening titles slightly windowboxed. The image is impressive throughout, not quite up at the level of the best 1.37:1 black and white titles from the period (it's much better than, say, 1947's Miracle on 34th Street but not as good as 1942's Casablanca), but very strong in terms of inky blacks and contrast. Though reasonably detailed - you can see the outline of Bogie's hairpiece, for instance - I was particularly impressed by the nighttime scenes and, early on, during the noir-like barroom brawl, in heavy shadows. Standard-def DVD always struggled with jungle foliage and the like, but here all that looks just splendid, and the extra-definition also enhances the performances - what faces Bogie, Huston, Holt, and Bennett have!

The 1.0 DTS-HD Master Audio is quite strong, bringing out Max Steiner's marvelous score particularly well. According to the box additional mono tracks and subtitles are available in French, Castilian and Latin Spanish, but there's also Portuguese, German, Danish, Finnish, Norwegian, Swedish and possibly many other hidden language options. (My Japanese PlayStation 3 offered Japanese subtitles as well.)

None of the supplements are new but all of them are good. Biographer Eric Lax contributes a strong audio commentary; "Discovering Treasure: The Story of The Treasure of the Sierra Madre" is a detailed, 50-minute making-of featurette, a good compliment with John Huston: The Man, The Movies, The Maverick. The latter is 21 years old and a bit clunky and show-bizzy by today's standards, but it also features many invaluable interviews, including with Huston himself. Also included is the usual "Warner Bros. Night at the Movies," a collection of optional period short subjects to run before the film, and theatrical trailers, but none of which has been remastered for high-definition. Finally, a radio version of the story, featuring the film's stars, is included.

The extras aren't new but the movie is peerless and the transfer very good. A DVD Talk Collector Series Title.