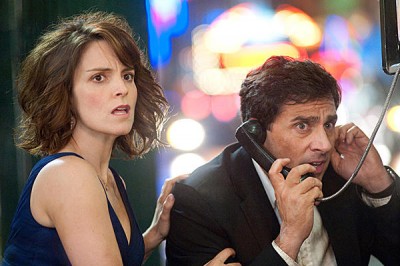 Date Night is not a classic, but it is certainly a testament to good comic acting and the way in which brilliant instincts can overcome major built-in handicaps. Had lesser talent been cast in the leads, Date Night, directed by Shawn Levy from a script by Josh Klausner, could have easily been another in a string of big-budget, overblown, and totally forgettable comedies. But Steve Carell and Tina Fey do more than make the film watchable; they bring some real insight to their characters - and are often uproariously funny.

The premise of Date Night sounds extraordinarily tired: a busy but bored middle-class couple, Phil and Claire Foster (Carell and Fey) are on the verge of settling into a dry, sexless marriage, and have recently witnessed the unexpected break-up of close friends. Impelled to bring some excitement back into their relationship, they decide to take their weekly date night out of the safety of their suburban New Jersey environs and into Manhattan. Unable to secure a table at the city's hottest new restaurant, they hijack another couple's reservation. After enjoying dinner, a case of mistaken identity leads to a confrontation with a pair of thugs who are shortly revealed to be dirty cops moonlighting as enforcers for a major crime figure. This propels the Fosters through a series of screwball set pieces that range from the purely comical to straight action. The film proceeds at a rapid pace as the Fosters spend the late night and early morning hours jumping through hoop after hoop to resolve their situation and clear their names.

Josh Klausner's script is fairly tight - a face-paced comedy caper that keeps the leads firmly in place as a middle-class couple whose marital difficulties feel relatively realistic. Never are their problems "solved" by heroic gestures or over-the-top action-oriented stunts. Klausner makes time for the Fosters to actually discuss their problems, keeping them at the forefront of the more outlandish dilemmas they face throughout the course of the film. Despite the care that Klausner takes in avoiding cartoonishly silly characterizations, director Shawn Levy's graceless, wit-free style applies an unpleasant idiot-gloss over the whole project that threatens to doom it from the very first frame. Jokes are handled like wet dog shit; i.e., they are clumsily dropped without a second thought as to their optimum disposition. In its images, the film is utterly witless. Levy's visual sense is non-existent - beyond the decision to shoot the film in widescreen, Date Night looks like any recent Hollywood production, and its purely by-the-numbers style often threatens to subvert the performances due to thoughtless camera setups and editorial choices that bring the work of Ed Wood to mind.

Thankfully, Steve Carell and Tina Fey - in addition to some exceptional supporting performers - are here to bring back some of the humanity and wit from Klausner's script, as well add their own substantial comic sensibilities to the proceedings. As I watched Date Night, I began to hope that Carell and Fey would become our next Tracy and Hepburn, with an ongoing series of films still to come. They are ideally matched and display the kind of comic skill that can only come from great professional chemistry. Scenes that could have played incredibly flat - especially under Levy's unimaginative supervision - are brought to life with small moments of improvised (?) inspiration: reactions, double-takes, mumbled ad-libs. These small but important contributions add comic flesh to scenes would have otherwise been, in some cases, painfully predictable.

Enjoyable support from Mark Wahlberg, Mark Ruffalo, Kristen Wiig, Taraji P. Henson, and Ray Liotta rounds out a varied and very able cast. Special mention must go to James Franco and Mila Kunis, who appear together in a single crucial and hilarious scene. Date Night is an enjoyable evening's-worth of comedy, made possible by a decent script saved by seriously talented actors.

As is their policy, Fox has forwarded a simple check disc in a plain white envelope. Since this does not reflect the final product, I cannot review the image, sound, or bonus content with any accuracy. Should the retail version of Date Night become available to us in the future, I will update this section accordingly.

Despite my inability to address the technical presentation or bonus content, I can say that Date Night is an entertaining film with a lot of laughs. Working against the best efforts of director Shawn Levy, who did his damnedest to deliver a stale, overworked Hollywood turd, leads Steve Carell and Tina Fey deserve admiration for creating realistic and thoroughly amusing characters from Josh Klausner's able script. Recommended.