The Criterion Collection // Unrated // September 14, 2010
List Price: $39.95 [Buy now and save at Amazon]
Review by Stuart Galbraith IV | posted October 5, 2010 | E-mail the Author
The signature film that with François Truffaut's The 400 Blows and Alain Resnais's Hiroshima mon amour inaugurated the French New Wave, Jean-Luc Godard's 1960 feature debut, Breathless (À bout de souffle, "At Breath's End") was staggeringly influential in its day, debatably more so on an aesthetic level than any single postwar movie with the possible exception of Arthur Penn's Bonnie and Clyde (1967) - which itself exhibits Breathless's influence. Admittedly, what was genuinely startling 50 years ago is in large measure lost on first-time viewers in 2010; ironically, like the older Hollywood movies it references Breathless has become something of a museum piece itself, partly because of all the imitators since, partly because some of its pretensions don't play to audiences as well as they once did. On the other hand, its casual intimacy and realization of its on-the-fly (and fly-on-the-wall) screenplay and directorial approach has given it a kind of immediacy that hasn't dated and which plays extraordinarily contemporary even today. Buried in its bygone Paris, its Champs-Élysées choking with ostentatious American sedans and cinemas showing Hollywood films like The Harder They Fall and Whirlpool, are scenes between its protagonists that could have been filmed yesterday.

Fox Lorber first released Breathless to DVD via an inadequate transfer back in November 2001. Criterion's two-disc edition came next, in October 2007, and was a vast improvement plus crammed with useful extra features. The new Blu-ray incorporates all these older supplements. 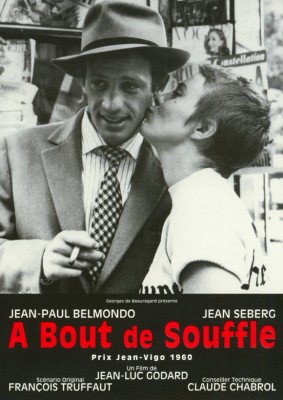 Jean-Paul Belmondo became an instant international star playing Michel, a petty thief. After stealing a car in Marseille and shooting the motorcycle cop on his tail, he heads for Paris to put the bite on former associates and old girlfriends while the manhunt intensifies. He becomes more deeply involved with casual American girlfriend Patricia (Jean Seberg), an aspiring reporter who, for now, walks the Champs-Élysées selling copies of the New York Herald Tribune. They spend a lot of time together hiding out, including nearly one-third of the film's 90-minute running time in a single extended scene, in her cramped studio apartment.

I should probably say up front I'm not a huge fan of the French New Wave (nor its Japanese counterpart) as a movement per se, though I adore individual films as well as certain directors, generally those working more around the edges of the New Wave than Godard, unquestionably the movement's most militant proponent. With Godard there seems no middle ground; people love or hate his films. Personally, I find all of his '60s films to be extremely interesting, challenging and ultimately rewarding but also frequently pretentious and indulgent. I pretty much gave up on him after his catatonia-inducing King Lear (1987).

Breathless is less about character and even less about plot (though it's Godard's most conventionally plot-driven work) than it is about breaking all the rules of cinema while at the same time acknowledging its influence, this being one of the very first important movies to constantly reference other movies.

What Godard essentially does is bombard the viewer with cinematic techniques that continually thwart conventional (especially Hollywood) filmmaking rules, using the noir genre as a kind of template. (Breathless resembles lower-budgeted noirs of the previous dozen or so years, particularly 1950's Gun Crazy.) Belmondo is a sort of half-assed Humphrey Bogart to Serberg's kinda Lizabeth Scott. He's flippant, wears a cocked hat and blows smoke at a photo of Bogie (Belmondo's smokes are big enough to be cigars, but I think they're unfiltered cigarettes*). He acts like a big shot but she calls the shots in the end.

In Hollywood movies filmed on soundstage sets, directors would shoot a lot of coverage: wide angles and establishing shots, close-ups, over-the-shoulder shots, etc., all carefully lit. Low-budget studios like Monogram - to whom Godard dedicates his film - had less time and money and were forced to stick to excrutiatingly long, static wide shots for the most part. Later, just as Godard was emerging, in America low-budget filmmaker Roger Corman got around this by compensating for his lack of coverage with clever blocking of his actors within the static frame. Godard opts for yet another approach: lots of tight close-ups that, instead of cutting to other angles, cut to itself again-and-again: in other words, jump-cuts. Godard employs many other convention-defying techniques, like breaking the fourth wall and having his characters address or stare directly into the camera, most famously in the film's final shot.

Back in 1960 Breathless was like nothing being made in Hollywood or anywhere else for that matter. Though in America its run was pretty much limited to "art house" cinemas, its impact was all-pervasive, from Hollywood movies to women's hairstyles (including this reviewer's mother, who with her Jean Seberg cut in 1960 was a dead-ringer for the actress). Seberg, who had worked in Hollywood and British films before this, was unprepared for Godard's unconventional shooting methods, which included handing his actors the day's script pages each morning and then shouting lines of dialogue for them to repeat while the camera was rolling.

Some of this works and some of it doesn't. The fashionable anarchy and flippancy of Belmondo's character (in one scene he jumps out of a taxi just to lift up the dress of an attractive pedestrian) who's a kind of charming jerk, doesn't play as ultra-cool today as it might have then, maybe because self-styled hipsters like Michel are everywhere and no longer an abberation. In his interesting essay Jonathan Rosenbaum makes a persuasvive case that sophomoric Michel adheres to a moral code while innocent-looking Patricia is the real nihlist, and with a strong instinct for self-preservation to boot, an inversion of the shady European - gullible American model. (Seberg speaks in heavily-accented French but more fluently in interviews. Was her unsteadiness with the language deliberately exaggerrated?)

In any case the film works best in its long scenes of intense intimacy, especially that beautifully realized, nearly 25-minute apartment scene, with Belmondo and Seberg lazily hiding out on her bed, having sex and listing to records, he in his white boxer shorts stripped to the waist, wiry yet buff, smoking in bed, she with her tightly cropped hair and sailor shirt, subtly manipulating him while he plays it cool. I suspect this single scene more than anything is what captivated 1960 audiences, sharing a shocking level of intimacy with the film audience at a time when Lucy and Ricky Ricardo were still sleeping in twin beds.

Sourcing a fine-grain master positive, Criterion presents Breathless in its original 1.33:1 aspect ratio. The level of sharpness and richness of the blacks is impressive, especially in close-ups (you can see every tiny flaw on Seberg's 20-year-old face) and the excellent night-for-night photography on the streets of Paris, filmed on photographic film stock with a 400 ASA but without the graininess associated with high-speed movie film. The French mono audio is fine, as is the unobtrusive English subtitles. The disc is region "A" encoded.

Supplements are the same as the earlier DVD. Included are archival interviews with Godard (who says that since everyone liked Breathless he hopes people will be disappointed with his next movie - what a kidder), Belmondo, Seberg (who's subjected to several alarmingly personal questions from the nosy interviewer), and director Jean-Pierre Melville, who has a small role in the film. Director of Photography Raoul Coutard and assistant director Pierre Rissient are interviewed in 2007 footage, while documentarian D.A. Pennebaker and critic Jonathan Rosenbaum offer intelligent readings of the film. Mark Rappaport's Jean Seberg looks at the fascinating, tragic actress's life and career, while the interesting but overlong 80-minute Chambre 12, Hôtel de Suède documents the making of Breathless. Godard's earlier short Charlotte et son Jules (1959) is included, along with a very clever French trailer; both are in high-def.

Today Breathless doesn't quite carry the enormous weight it once did though in innumerable ways even now it's still a remarkable achievement, and Criterion's gorgeous Blu-ray transfer and gobs of helpful, informative extra features make this one of the year's best releases. A DVD Talk Collector Series title.

* Reader Sergei Hasenecz suggests, "I haven't seen the movie in years, but I'd guess he smoked Gitanes or Gauloises. Both are chest hammers."