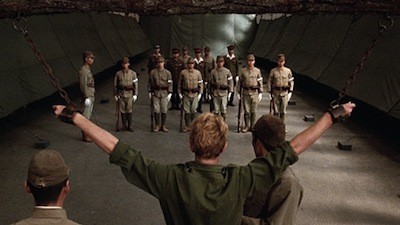 1942. A Japanese prison camped for Allied POWs captured in Korea and other parts of Southeast Asia. This is the setting for Merry Christmas Mr. Lawrence, Nagisa Oshima's 1983 film of hidden desires behind the barbed-wired fences.

Tom Conti leads the film as Colonel John Lawrence, a British officer with some expertise and experience in Asia. His ability to speak Japanese makes him a valuable liaison between the prison guards and their prisoners, even if it does make some of the other men suspicious. At the start of the movie, Lawrence is roused from sleep by the gruff-voiced Sgt. Gengo Hara (Takeshi Kitano in an early role; he is billed as simply "Takeshi"). One of Hara's men (Johnny Okura) has been caught in a compromising position with a Dutch prisoner (Alistair Browning), and Hara wants Lawrence to both translate for the victim and be witness to what happens. Hara would like to punish his soldier without involving his commander, the aloof Captain Yonoi (musician Ryûichi Sakamoto). Homosexuality is not to be tolerated, particularly if the captor forced himself on the captive.

Yonoi does end up stumbling into the situation, but he has little time for it. He is on his way to base where a tribunal has been called to deal with another captured Brit. Major Jack "Strafer" Celliers (bleached-hair, Let's Dance-era David Bowie) was engaging in what was apparently some pretty effective guerilla warfare before he ran afoul of the Japanese army, and his lack of cooperation now that he is in their hands has confounded the top brass. Yonoi is brought in for some outside perspective--only his superiors don't know how far outside it is. In one of the least subtle "falling in love" scenes you can imagine, Oshima shows Yonoi as hypnotized by the blonde-haired grunt. The music swells, the camera pushes in, Yonoi is transfixed. Benefit of the doubt, maybe Oshima was purposely playing on old-fashioned romance conventions. Regardless, we get the point.

Unsurprisingly, Yonoi takes Celliers back to his prison camp, where his fixation doesn't go unnoticed. Not by Lawrence, Hara, or even Celliers himself. Yonoi tries to show off for his crush; he practices his sword fighting where the convalescing prisoner can hear his grunts and moans. For his part, Celliers becomes a subversive element in the camp, particularly when he challenges Yonoi's orders for a period of fasting by going out and picking edible flowers for his bunkmates. Again, the romantic imagery is pretty clear, though this colorful display is far more effective. If I had a still of the scene, I would caption it like a title from a Bullwinkle cartoon: "Make Love, Not War; or, Gather Ye Rosebuds While Ye May."

Merry Christmas Mr. Lawrence is a strange picture. It is based on the memoirs of a real prisoner of war, Laurens Van der Post, though the script by Oshima and Paul Mayersberg (The Man Who Fell to Earth, The Last Samurai) more strongly resembles a Yukio Mishima novel. Like Mishima, the story is concerned with honor and how men conduct themselves in structured situations. Suppressed passions rise up in strange ways, and on a symbolic level, homosexuality is equated with a physical deformity. Not as a value judgment, mind you, both Oshima and Mishima had a broad sexual view, but as something to be hidden lest you be judged. In Merry Christmas Mr. Lawrence, we see Celliers' early life and his young brother (James Malcolm), who had a hump on his back. Celliers tells Lawrence how he was too morally weak to stand up for his sibling when the pack victimized him, something he considers to be his greatest failing; the events at the POW camp will at long last provide him an opportunity for redemption.

There's a lot of strong stuff in Merry Christmas Mr. Lawrence. The complexity of the drama and the psychology of the characters is fascinating. Lawrence forms an unexpected bond with both Hara and Celliers, driven together by the odd behavior of Yonoi. The Captain's own secret shame ends up connecting to how he finally deals with the alleged rapist (there's some question of what really happened), and he masks his sexual frustration further by trying to assert military dominance over his prisoners. Oshima fumbles again here, playing the movie's climactic moment a little too obviously. Any time a filmmaker shifts into slow-mo to emphasize the important action, they are just asking for trouble. Much of the storytelling in Merry Christmas Mr. Lawrence is both clumsy and old-fashioned, with narrative jumps making some crucial plot points come off as out of joint. Also, the musical score by Ryûichi Sakamoto, which features a lot of '80s synthesizer, is dated and anachronistic. I found it distracting.

Thankfully, the acting is uniformly solid, and this allows the material to rise over any bad directorial choices. As a reviewer, I use the word "solid" a lot, and in this case, I really mean it. There is a consistency to the performances in the movie that is almost as level as a cement slab. Conti, Bowie, and Sakamoto are all good, but unremarkable. Only Takeshi Kitano stands out. He is possessed of a more natural screen charisma than the others, and the camera is magnetically drawn to his orbit. It's no surprise he went on to better things.

Merry Christmas Mr. Lawrence has an impressive final act. The fate of Celliers is macabre, and despite the panting earnestness of the early scenes, Oshima knows that repressed emotions are more effective in this case than any sweaty relief would ever be. Mr. Lawrence is a sad film, one where there is no clear line between right and wrong, and thus no satisfaction for anyone. The melancholy denouement neatly encapsulates all the things the rest of the film touches on: war is destructive, and it causes men to act in ways that are against their nature. The cultures that have been clashing finally get a moment's peace, and they eventually understand each other in some fashion--even if it is only two men, they represent some part of the whole.

Though not a masterpiece, Merry Christmas Mr. Lawrence is an intriguing film. Given the current debate over "Don't Ask, Don't Tell" in the United States Senate, there are even political elements to it that are still relevant. It's hard to say if they are any less progressive now then they were nearly thirty years ago. At one point in the movie, Hara says that, to a samurai, there is no gay or straight, there are just men on the battlefield. Why hang yourself up with worries about anything else? It's a code of honor well worth adopting.

Video:
This is the first time that Merry Christmas Mr. Lawrence has come to any kind of digital disc in the United States, and Criterion does it up right for their Blu-Ray release. The 1080p high-definition transfer (1.78:1 aspect ratio) has lots of impressive detail. Outdoor scenes look especially good, with vibrant colors and a tremendous clarity. You can practically stop and count the blades of grass. Darker scenes have a little more graininess, as do wider shots. This appears to be the nature of how the film was shot, however, as the transitions seem natural. The overall image appears to be very true to the original intent of the filmmakers.

Sound:
The bilingual soundtrack is presented here as a DTS-HD Master. The stereo mix creates a nice interspeaker balance with the original audio, creating a decent amount of depth even with a simple 2.0 range.

Subtitles for the Japanese dialogue are very easy to read and clearly written.

Extras:
Criterion has given a variety of quality supplements for Merry Christmas Mr. Lawrence, starting with their usual interior booklet. The 28-page pamphlet has a new article by critic Chuck Stephens, a 1983 interview with Oshima, and a new 10-question Q&A with Beat Takeshi, along with photos, a chapter listing, and credits.

The supplemental video features lead with older documentary pieces. The near-half-hour Oshima Gang is a period making-of featuring the cast and their director talking about the movie, while Hasten Slowly is a 1996 documentary about author Laurens van der Post. Besides writing the novel on which the movie was based, van der Post had a fascinating life. He was a soldier, a journalist, and a true political player with the courage of his convictions. The material does show its age, but looks good in this format regardless.

In addition to these older pieces, Criterion offers new interview segments that look back at the making of Merry Christmas Mr. Lawrence. These are broken down into categories:
* On the Screenplay: 28 minutes with Paul Mayersberg on working with Oshima
* On Location: Tom Conti, Ryûichi Sakamoto, and producer Jeremy Thomas talk about shooting the movie (40 minutes)
* On the Music: Ryûichi Sakamoto talks about the score (18 minutes).

There is also the original theatrical trailer.

Alongside the usual chapter selection menu, Criterion also offers a "Timeline," which essentially lets you scroll through the chapters with information on what is happening in each, and you can create bookmarks for visiting later.

FINAL THOUGHTS:
Not available since VHS went gently into that good night, Nagisa Oshima's 1983 prisoner-of-war movie Merry Christmas Mr. Lawrence has been given new life via a splendid Criterion package. A tale of suppressed desires and complicated morality, it stars David Bowie as a British soldier who disrupts the social calm of a Japanese POW camp by unhinging its captain (played by another musician, Ryûichi Sakamoto, who also composed the wonky score). With the officer unable to express what he's truly feeling, emotional blackmail and transference end up being his only options, with complicated consequences. The newly restored picture looks amazing, and though I found the film flawed, the overall package is fantastic. Recommended.