Director Ben Steinbauer first saw the Winnebago outtakes, as many did, on a VHS tape that had been floating around in dupes of varying quality for several years. The story goes that back in 1989 a man named Jack Rebney was fronting an industrial video for the Winnebago corporation and was so angry and abusive to his crew that they just kept the camera rolling, and used the outtakes to get Rebney fired. The tape became a favorite of filmmakers and fans of odd "found footage," primarily thanks to Rebney's palpable temper and colorful profanity, and when it hit YouTube, it became an viral video sensation. There were highlight reels, there were tributes, there were remixes. But Steinbauer couldn't help but wonder, whatever became of that frustrated, bitter man? "I felt bad for the guy," he tells us in voice-over. "But I loved the clip." And for reasons unknown, Ben Steinbauer decided to track Jack Rebney down. Winnebago Man is the story of what he found.

Steinbauer's film is a first-person doc with a homemade feel, though it does have hints of a broader scope--specifically, an early and thoughtful examination of Internet meme culture. Why are we drawn to these clips that are, ultimately, humiliating for their subjects (the "Star Wars Kid," the "Impossible is Nothing" guy, etc.)? Is it mere schadenfreude, or does it say something more nefarious about our reality-TV-and-TMZ culture that we're using so much bandwidth to, basically, point and laugh? After all, these aren't just 1s and 0s on our computer screens--they're real people. At least, that's Steinbauer's thinking; when he talks to the hosts of The Show Without a Name, which showcased the Rebner video, one insists, "there's no reason to know the guy."

Nonetheless, the director tracks down the crew of that original shoot, and starts to piece together how the tape came to be. But none of them have a line on Rebney, who disappeared shortly after its production, and when Steinbauer hires a P.I., he finds Rebney has made himself a ghost--no voter registration, no property, no car, no address beyond a string of P.O. boxes. As a last-ditch effort, the director sends letters to those boxes. And then Jack Rebney calls. 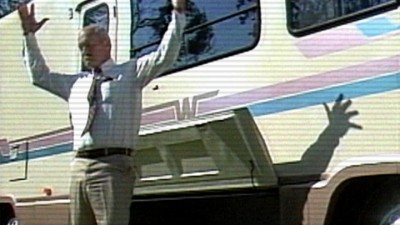 He lives in a remote area of northern California, the caretaker of a fishing resort, living a life of solitude, a self-confessed hermit. He's mellow, charming, free of profanity; it's "as if he spent the last twenty years mediating and drinking green tea," Steinbauer notes, bewildered. He doesn't seem that interested in the video, and his newfound Internet celebrity. Steinbauer leaves, confused--what kind of stupid journey was this? And then the turn--Rebney confesses in a follow-up call that it was all an act. Of course he's not some mellow hippie hermit. He's pissed off, about everything--the state of the country, consumerism, Dick Cheney. And most of all, he's mad that all a bunch of mouth-breathers on the damned Internet know about him is that stupid video. He wants to set the record straight. He wants to clear his name.

The well-meaning director then spends some time with his subject. He's worried about what happens next ("What if putting him back on camera ends up humiliating him all over again?"), and not sure exactly how to satisfy Rebney--he makes seemingly sensible suggestions (like buying him a video camera for his commentaries), and Rebeny snaps at him and slaps them down. The temper is real, the filmmaker discovers. It's not just some funny video--this is a dark, angry, complicated guy, with a dry, biting wit and a wonderful rolling voice that betrays his TV news roots. And the swearing--as that old video would indicate, this man is an artiste of profanity, chewing the consonants, spitting the vowels.

He's such an entertaining character that for much of Winnebago Man, Steinbauer doesn't have to do much more than the Winnebago crew did: point a camera at him and let him go. But even if the film isn't terribly sophisticated, it genuinely wants to understand Rebney, and to give him that opportunity to "set the record straight." And Steinbauer is a smart enough filmmaker to know a climax when he sees one: Rebney is invited to make a personal appearance at a nearby installment of the "Found Film Festival," which will show his famous video and host a Q&A. Rebney goes in expecting to be "part of some dumb-fuck dog-and-pony show," and as the highlight reel is screened, we start to feel some of the same discomfort so keenly captured in Michael Stephenson's recent Best Worst Movie--the fear of a kind of cruelty directed towards a subject who's not in on the joke. The camera holds on Rebney's face as he stands in the back of the auditorium while the tape plays, and he is absolutely impossible to read. And then goes to talk to the crowd. What transpires, and how Steinbeauer brings the film to its unlikely conclusion, is wonderful and rather moving. He does, in fact, manage to do what Rebney asked him to: he takes this man who was a joke, and renders him a full, perhaps tragic, yet strangely likable figure. Talk about doing someone a kindness.