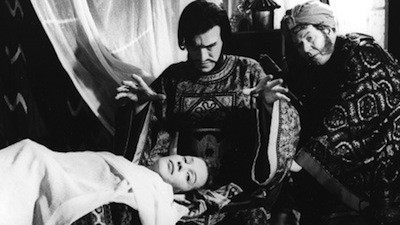 Ingmar Bergman's 1958 supernatural caper The Magician is one of those movies where nothing is as it seems, everything has two explanations, and the very notion of the "knowable" is called into question. Its knotted narrative is full of tricks and surprises, some obvious and others not so much, and by the end, Bergman has pulled off his own cinematic magic trick, leaving the audience wondering just which of his flickering illusions to believe.

The Magician opens in a Swedish forest somewhere near the tail end of the industrial age. We move in on a traveling sideshow led by one Dr. Vogler (Max von Sydow). Amongst his group are the master of ceremonies Tubal (Ake Fridell), Vogler's grandmother (Naima Wifstrand), the androgynous Mr. Aman (Ingrid Thulin), and the carriage driver, Simson (Lars Ekborg). We are given multiple explanations as to what this band of performers does. They regularly insist on their own lack of veracity--they do tricks for show, nothing more. They sell noxious potions that are really interchangeable and have no actual effect. Or do they? Granny is a witch, so maybe she does know some magic spells. Dr. Vogler is also said to be a master hypnotist who heals people with magnets. Tall, dark, and bearded, Vogler is an imposing figure; he is also mute.

In the woods, the troupe finds an ailing actor (Bengt Ekerot). They take him in their carriage, and he dies before the group reaches civilization. They take the body to the police, but find they are in trouble for other infractions. Their various reputations precede them. The performers are hauled before a tribunal of three: a smug police chief named Starbeck (Tovio Pawlo), a local scientist called Dr. Vergerus (Gunnar Björnstrand), and Consul Egerman (Erland Josephson), a town dignitary. They demand Vogler and his people account for themselves, and even push for a demonstration of the Doc's powers. It turns out that Vergerus and Egerman have a bet going. Vergerus believes that all this world has to offer is what science can verify, whereas Egerman insists there are unquantifiable forces always at work.

Most of The Magician takes place over the tense night in custody at Egerman's home. The various members of Vogler's crew interact with Egerman's staff, seducing them and demonstrating their special talents. There is a subtle comment on class here: the more common folk believe in religion and magic, the more affluent and educated do not. Yet, as Bergman holds back the curtain and shows us things that defy rational explanation, who are we to side with? The dead actor wanders the house as a ghost, interacting with Granny and Vogler. A thunder storm brings strange portents. Passions are stirred. Mrs. Egerman (Gertrud Fridh) is drawn to Vogler. She claims to want the psychic to explain the recent death of her daughter, but her heaving bosom suggests she desires more. Likewise, Vergerus makes no bones about his interest in Aman, though Aman proves more loyal than he expected--all the more frustrating, as what Vergerus perceives as Vogler's charlatanism represents everything the scientist hates.

Bergman is blessed with a powerhouse cast for The Magician. von Sydow, Thulin, Josephson, and many of the others are all recurring members of his reparatory, as is Bibi Andersson, who plays Sara, a servant girl who takes a love potion with Simson. As the night wears on and all the players become entangled, it's hard not to think of Bergman's comedy Smiles of a Summer Night; The Magician is like the brooding companion piece, Frowns on an Autumn Evening. With dawn approaching, more layers are folded back, more masks dropped. Everyone has hidden agendas, everyone has secrets. Vogler acts as a funhouse mirror for all of them: they see in him what they want to see.

This all leads to a command performance for the tribunal, their servants, and their wives. Vogler and his people turn the tables, and rather than expose themselves, they expose things about their accusers. One man who is part of Egerman's guard is so undone, he even resorts to violence. There is something about Vogler's chosen practice that makes the common men angry. His dark arts are an affront to what they believe, a challenge to their morals and their mortality. In the bonus features, critic Peter Cowie suggests this was Bergman's metaphor for the director's contentious relationship with a moviegoing audience hostile to the complicated metaphysics that are a hallmark of his work.

Regardless, the magician's actions put into motion the final act of the film, where the thinking man, Dr. Vergerus, must confront Vogler's illusions directly. It's hard to say much more without giving it away. My instinct to contextualize the story by the genre it most reminds me of would even reveal too much. Suffice to say, the final act of The Magician has some bold story moves, as well as some of Bergman's most audacious surreal imagery. He and cameraman Gunnar Fischer and production designer P.A. Lundgren could have taken what they started here and made one hell of a carnival haunted house, let me tell you.

There is a lot to digest in The Magician. All the characters are dealt with before the finale, all the subplots wrapped up, and together they create a dramatic tapestry that is fun to pick apart and analyze. Emphasis on fun. Bergman's movie is one of his more self-conscious entertainments. It's spooky and challenging, and Bergman uses all the mechanics of a good fireside ghost story. If Cowie is right about the director responding to his harshest critics, then it makes the strange Hollywood-like ending that caps the picture make more sense. It's similar to the swindle of Spike Jonze and Charlie Kaufman's Adaptation, like Ingmar is saying, "You can have the cheap entertainment you so desire, I can fit my cinema of ideas into that, no problem." Yet, the ultimate sleight of hand is The Magician isn't really that thing audiences think they want, yet it sneaks in anyhow, and quality wins out after all. 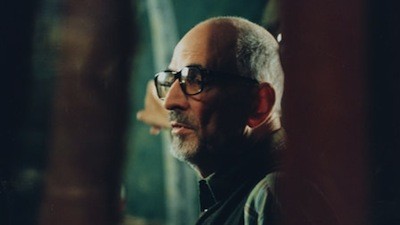 Video:
The 1080p, full frame image on The Magician - Criterion Collection is gobsmacking in its clarity. The black-and-white photography looks gorgeous on this disc. There isn't a scratch on the film, and the values between light and dark are wonderful. Every little detail comes through absolutely. Though made in 1958, The Magician looks brand new.

Sound:
The uncompressed mono audio track is also exceptionally clear. There is no hiss or any off sounds. There is even some subtlety, despite only being a single channel. Take note, for instance, of a scene between Vogler and his wife where a bell peals in the distance. For a second, I didn't even realize it was in the movie, I thought it was somewhere outside my house.

The new English subtitles are really good. Easy to read and elegantly written.

Extras:
The Magician - Criterion Collection comes with a 36-page booklet full of photos, credits, a chapter listing, and multiple essays: one from 1990 by director Olivier Assayas, a new piece by Geoff Andrew, and a pertinent excerpt from Ingmar Bergman's autobiography.

The supplemental section (all features are in HD) begins with two snippets of interviews with Bergman. The first, shot around the time of Persona (1967) and running 3 minutes and 37 seconds, briefly touches on The Magician, but is more of a defense of Bergman's reluctance to explain his movies. The second piece runs over 20 minutes, and it's an audio interview in English, conducted by filmmakers Olivier Assayas and Stig Björkman in 1990. Here, a conversation about the creative process covers Bergman's transition from theatre to film and ends with a brief discussion of The Magician. The audio plays over a photo of Bergman, and there are subtitles to aid in deciphering accents and combat the subpar nature of the recording. The influence of Strindberg, Duvivier, and Renoir is discussed.

Critic Peter Cowie has constructed a new video essay about The Magician. Just under 15 minutes, Cowie uses vintage photographs and clips from the movie to explain the complex fabric of the motion picture and decode some of the symbolism. Cowie compares The Magician to Bergman's other works and reveals connections from the director's greater filmography.

Alongside the usual chapter selection menu, Criterion also offers a "Timeline," which essentially lets you scroll through the chapters with information on what is happening in each, and you can create bookmarks for visiting later.

FINAL THOUGHTS:
Highly Recommended. The Magician - Criterion Collection at long last brings Ingmar Bergman's 1958 tingler to disc, and the Blu-Ray package is phenomenal. The gorgeous black-and-white movie tells of a night in a remote Swedish village, where a troupe of traveling magicians are locked away and asked to prove they are what they say they are. The movie toys with horror tropes, challenging what we see and what we believe, and dissecting the nature of entertainment in the process. It's a glorious ruse, and well worth watching.