The Criterion Collection // Unrated // October 26, 2010
List Price: $39.95 [Buy now and save at Amazon]
Review by Stuart Galbraith IV | posted October 26, 2010 | E-mail the Author
Nearly indescribable, Nobuhiko Obayashi's House (1977) is like a cross between Dario Argento's Suspiria and an episode of The Monkees. Though generally regarded as a horror film, it's also a teen fantasy/kung fu/erotic coming-of-age/splatter/comedy - Jan Švankmajer meets Pink Lady.

Horror-fantasy film fans and Japanese cinema devotees have wanted to see House for years. It's a good introduction to the colorful career of its director, whose films deserve a wider audience in the west, and Criterion's new Blu-ray offers both a marvelous transfer struck from the original camera negative and very good supplements, including Obayashi's equally fascinating 45-minute Emotion (1966), featuring the same explosion of wild imagination. 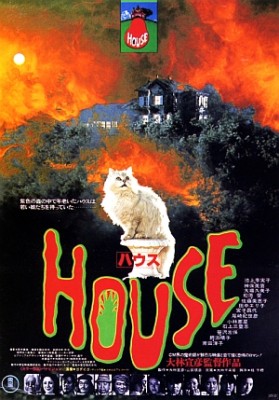 The plot, such as it is, concerns a group of teenage schoolgirls who decide to spend their summer holiday at a house in the country. Gorgeous (Kimiko Ikegami) is upset when her widower father (Saho Sasazawa), a famous composer of film scores just back from Italy ("Leone said my music was better than Morricone's!"), has decided to remarry, to beautiful Ryoko (Haruko Wanibuchi). Angry at his decision, rather than spend the summer with them she decides to visit her late mother's sister (Yoko Minamida*) and invites her friends along, all of whom have nicknames based on their personalities: Kung Fu (Miki Jinbo), Fantasy (Kumiko Oba), Prof (Ai Matsubara), Mac (Mieko Sato, her character a big eater), Melody (Eriko Tanaka), and Sweet (Masayo Miyako)**. (Amusingly, Japanese lobby cards played up the actresses' backgrounds as commercial models, noting their bust and hip measurements.)

(Mild spoilers) Soon after being greeted by Gorgeous's strikingly beautiful, white-haired and wheelchair-bound (for the time) relative, strange things begin to happen. Very quickly it becomes clear that Auntie's a ghost and both she and the house are eager to gobble up the pure, unmarried girls one by one.

To say the least, the Japanese film industry was in a doldrums in 1977, its Golden Age already a distant memory. Toho, the company reluctantly behind House's production, had a few big hits such as Submersion of Japan (Nippon chinbotsu, 1973), an all-star disaster epic, and its shameless and shoddy Star Wars rip-off The War in Space (Wakusei daisenso, 1977), but by 1977 its Setagaya lot mostly resembled a ghost town itself. House, incredibly, began as Toho's answer to Jaws: executives thought Obayashi, a prolific director of Japanese television commercials (featuring imported spokesmen like David Niven and Charles Bronson) and highly-imaginative experimental shorts, might be Japan's answer to Steven Spielberg. When they saw his screenplay, based largely on ideas his 10-year-old daughter suggested, they balked and the project went into limbo. However, Obayashi began pushing the project in all media, publishing a novelization and manga version, casting it with girls from the commercials he made, and even released a soundtrack album a year before a frame of footage was shot!

Toho finally relented, though despite all the hype decided to dump it into theaters as the bottom-half of a double-bill supporting a Momoe Yamaguchi-Tomokazu Miura vehicle, Pure Emotion and Mud (Doro darake no junjo). House nevertheless became a hit, angering traditionalists within the industry.

House is without precedent, unlike anything that had come before it. The entire film is deliberately artificial, like the painted backdrops in The Wizard of Oz; nearly every shot of the sky, for instance, is either a matte painting or a painted backdrop. Even shots that need not be, such as a wide angle in front of Tokyo Station, are deliberately stylized, deliberately fake. Similarly, the acting, scoring, editing, et. al, are not at all intended to be realistic.

What's most impressive about House is how almost literally every single shot in the film is infused with some form of trickery: on-set special effects, effects generated via an optical printer - the lab bill on this film must have been huge - from irises and wipes to skipped frames and split screens, imaginative and unexpected camera moves. The film includes special effects done on video using the chroma key, pixilation (a form of stop-motion animation), traveling mattes. By the end of the film, just about every effect imaginable has been employed, some dating back to the beginning of cinema and Georges Méliès.

The picture is consistently amusing in a fluffy, cotton candy sort of way, referencing everything from Japanese silent and wartime propaganda films to contemporary popular cinema (Tora-san, though not the actor who played him, makes a cameo appearance, along with a Bunta Sugawara look-alike) to American horror movies. Writer Denis Gifford was probably pleased, as his A Pictorial History of Horror Movies is prominently featured in several shots. The horror aspects are more in line with Japan's kaidan eiga ("ghost story movies"): creeping black hair in the bathtub, a talking disembodied head, both good shock effects, and a traditional Japanese ghost-cat are featured. Some references may be culture-specific: an early scene where a small lizard is impaled may refer to the belief, in some parts of Japan, that lizards found inside a house are signs of good fortune.

The movie is non-stop, phantasmagoric eye-candy, but as the images and its thin story and characters are all there is, House is also a bit wearying before it ends, though worth the effort.

Presented in its original "standard size" aspect ratio of 1.33:1 - the tiny handful of Japanese movies that weren't 'scope during this period were almost always presented standard size, though soon after this the Japanese adopted "VistaVision size": 1.85:1 - House looks absolutely marvelous throughout. Derived from the original camera negative, even the many optical effects come off well, including the few video-based effects. (The film was shot with Panavision equipment, rare for the period.) More than most, House depends on its visuals to carry the film, and the bright primary colors almost bounce off the screen. It's a great transfer. The mono audio (Japanese only) and optional English subtitles are likewise fine. The disc is region "A" encoded.

The centerpiece among the extra features is the 45-minute Constructing a "House", an extended interview with Obayashi, his daughter Chigumi, and screenwriter Chiho Katsura. Obayashi's comments are highly amusing and even touching. Being an American-based featurette, the interviewees are unusually candid, especially about Toho's resistance to the project and the critical and industrial backlash after it was made, comments hard to imagine in a Japanese home video release.

Emotion, Obayashi's 1966 experimental film, is as densely packed with imagination and visual flair as House. It's a bit more pretentious (this "un film de" Obayashi, so-called, is dedicated to Roger Vadim) but in some ways even more entertaining. A young Donald Richie provides English narration. The film also offers fascinating glimpses into Tokyo of 45 years ago and its huge influx of Western world popular culture - including the movies Thunderball and Africa addio, advertising for which is visible in several shots.

Director Ti West (House of the Devil) appears in a short video, making a few good comments, such as noting similarities between House and Joe Dante's early work. A Japanese trailer plays up the horror aspects, and doesn't seem to understand the film much. All of this material is in high-def. An excellent booklet essay by Chuck Stephens rounds out the extras.

House isn't exactly a masterpiece of Japanese cinema, but it's so bold, densely creative, and flat-out nuts that it just has to be seen. I'm also hoping its success in America will prompt the release of other films by the unjustly ignored Obayashi, who has made five or six films even better than this, movies that truly deserve to be seen in the west. A DVD Talk Collector Series Title.

* Minamida died last year of complications from Alzheimer's Disease. Her husband and Pigs and Battleships co-star, Hiroyuki Nagato, lovingly cared for her during her illness, as detailed in a shattering Japanese television documentary.

* Some of the names are approximations, slightly altered to more aesthetically pleasing English. Gorgeous's name in Japanese, Oshare, is sometimes translated as "Angel" but most directly translates as "Fashionable." Prof's name, Gare is more like "Studious," and Fantasy, Fanta seems equally derived from the popular soft drink.