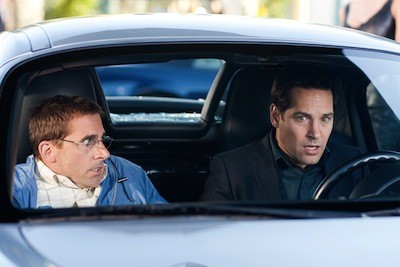 River Phoenix once starred in a movie called Dogfight, in which soldiers about to ship out for Vietnam, looking for a last hurrah, competed to see who could bring the ugliest date to a party. Given that this was a Hollywood movie, audiences were expected to believe that Lili Taylor was the worst Phoenix could do. Try harder, kid, she's lovely.

Jay Roach's Dinner for Schmucks is a new riff on the concept. In this film, Paul Rudd plays Tim, a morally conflicted but well-meaning financial analyst whose promotion at work is riding on him attending a dinner where the top brokers are expected to bring the biggest loser they can find. The catch is, of course, that the losers think they are coming to a meal where they will be celebrated for being extraordinary. The hosts are rich douchebags, and their entertainment is other people's misfortune. Tim is thinking of bailing on the whole thing when, unexpectedly, he runs into Barry. Literally runs into him. As in, with his car. Barry is a loveable but dim tax agent who is also a taxidermist. He is played by Steve Carell, and thus this time the concept requires no suspension of disbelief--with a gifted comic actor like Carell, you really are getting the biggest idiot around.

Tim thinks that having Barry on board for the dinner means he has it in the bag. Oh, but he doesn't know Barry! When Tim's new pal shows up a day early for the shindig, convinced that the gathering is that night, Barry inserts himself into Tim's life and there is no getting him out. Before Tim knows what has hit him, Barry has invited a crazy stalker (Lucy Punch, Hot Fuzz) to Tim's house, causing Tim's girlfriend Julie (Stephanie Szostak, The Good Heart) to think Tim is cheating, potentially queering the important business deal that got Tim invited to the "Dinner for Winners" in the first place. A Swiss moneyman (Little Britain's David Walliams) insists on having brunch with the couple so that the women can talk art while the men talk investments. Instead, Julie is possibly running off to make animal sex (also possibly literally) with an artist she exhibited at her gallery (a very funny Jemaine Clement from Flight of the Conchords). Tim doesn't know who's coming and who's going. 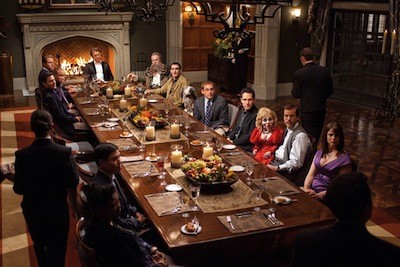 Dinner for Schmucks is one of those comedies where one character is the bringer of chaos, and the introduction of said character opens a black hole for the lead's life to tumble into. The more that goes wrong, the more this character wants to help; the more he helps, the more that goes wrong. Tim tries to shake Barry, but then Barry looks so sad, Tim feels ashamed. Screenwriters Michael Handelman and David Guion, the team behind the Zach Braff flop The Ex, pile on the comedic scenarios, building a tower of babble that takes us all the way to the top floor: the dinner itself. There, we get to meet all the other freaks that Tim's colleagues have rounded up, including Barry's boss and nemesis, Therman Murch (Zach Galifianakis). Can a showdown be far behind?

Dinner for Schmucks is a very funny movie. I laughed pretty consistently from beginning to end. Paul Rudd is as crushable as ever, and he makes a great straight man opposite Carrel's outsized personality. Carrel is pure magic as Barry, indulging his every Peter Sellers fantasy under a ridiculous haircut and false teeth. The actor has the right balance between childlike innocence and full-on obnoxiousness that is integral to this sort of comic figure. We have to kind of love him a little, there has to be some "laughing with" to go with the "laughing at." Carrel barrels through every scene, determined to root out every chuckle he can and finding plenty in the process. Fittingly, Galifianakis is the only performer that comes close to stopping him. Watching them square off is genius.

My only problem is that maybe Jay Roach wants us to like Barry and Dinner for Schmucks a little too much. The film--which is actually based on a French comedy by La cage aux folles-creator Francis Veber called Le dîner de cons (a.k.a. The Dinner Game)--has a persistent pleasantness that stops it from ever fully taking off, meaning Dinner for Schmucks ends up being a pretty good comedy rather than a great one. Despite how mean-spirited the game is, the movie itself is too timid to ever go balls-out and be as cruel as it wants to be. The other guys from Tim's office, sure, are arrogant jerks, but we never get to hang around long enough to hate them as much as we should, and Tim himself isn't allowed to fully indulge the anger that should be boiling up inside him. Yes, there is a predictable outburst that hurts Barry's feelings, and this sets up the predictably sentimental reconciliation that then makes way for the life lesson we knew was coming from pretty much the first time Tim and Barry meet, but it's not like any blood is drawn.

Comedy of this kind requires a little edge. Dinner for Schmucks needed more rage and less hugs. It should have been a caustic R-rated movie for adults instead of a PG-13 plea to the cheap seats (presumably, the bean counters always expect Jay Roach to appeal to the audience that keeps turning out for his Fockers franchise). Particularly in the climax, when the weirdoes are all gathered together and forced to out-weird one another like goofball gladiators, the performers should have been unleashed to really go over the top. Why be cautious in slapstick? Go for the whole mad, mad, mad, mad world.

Then again, this is a movie that begins with one of the most endearing credits sequences I've ever seen--a montage of the dioramas Barry builds with dead mice, showing the stuffed rodents in miniature playlands indulging in love and whimsy--so I don't know what I was expecting. Perhaps a pay-off where the models turn out to be the sad re-creations of a happiness Barry will never have? It would add weight to their transformation into his unwitting triumph. There is a thematic animal metamorphoses connection between Barry's work and Clement's, and it's meant to parallel the transformation of Rudd into a morally competent individual. Did you catch it? No, that's because the cheese-eaters are dealt the same even hand as everything else, becoming neither large nor small. Dinner for Schmucks is an empty vessel, pour in your own meaning to the level required.

Admittedly, that's three paragraphs of grumbling for what I say right out is my only complaint. It's a big one, to be sure, but not enough to ruin Dinner for Schmucks for me, or to not recommend you go see it as well. What is there works and is well worth the ticket price, regardless of whether it leaves you wanting for more. It was designed to be dependable entertainment, and so being inoffensive kind of goes with the territory. If it hadn't delivered the gags, the sweetness would kill it, but since Dinner for Schmucks does deliver, I say dig in.