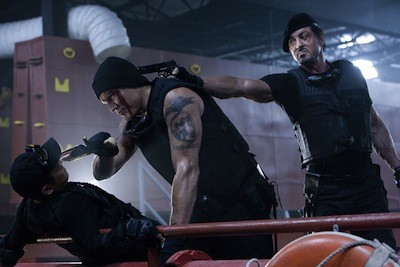 The Expendables is the return of meat-eating, cigar-chomping, neck-stomping '80s man cinema, and the cinematic bodybuilders responsible for scheduling this comeback want you to know it. Every second of hype, every frame of film, is devoted to testosterone. Proudly, I might add. As one online video suggests, there is a reason The Expendables is being released on the same weekend as Eat, Pray, Love.

For those who don't know, The Expendables is the new starring vehicle by writer/director Sylvester Stallone. After the serious Rocky Balboa and all-business violent explosion that was Rambo, Sly wants to let it be known that he still knows how to have a good time. So, he and co-writer David Callaham (Doom) have concocted a buddy action movie. Stallone plays Barney Ross, the head of a group of elite mercenaries who take the jobs no one else wants. His right hand man is Lee Christmas (Jason Statham), and his team also includes a martial arts expert (Jet Li), an ex-football player (Terry Crews), a UFC fighter (Randy Couture), and a former Rocky-opponent (Dolph Lundgren).

Yup, the gang's all here. The Expendables book their jobs through Mickey Rourke, the guy hiring them is Bruce Willis, and Stallone's rival is Arnold Schwarzenegger (the latter two only appear in one scene, just FYI). Willis' mysterious money man Mr. Church wants the boys to take out a Latin American dictator on a small island in the Gulf. General Garza (David Zayas) is the puppet of an ex-CIA slimebag named James Munroe (Eric Roberts), who presumably hired Steve Austin to be his heavy so we could finally see a showdown between pro-wrestling and mixed martial arts (Austin vs. Couture, oh yeah!). Plus, let's not forget that the General has a pretty daughter (Giselle Itié) who likes older men as long as they are not working for her father. Vaguely romantic subplot, anyone?

If it sounds like Stallone is stacking the deck in The Expendables, it's because he is. He is desperate for The Expendables to work, because if it does, he can get back to making these kinds of movies more often. I don't blame him, it must suck to be out of fashion. The thing is, that desperation follows him all through this movie. As any woman will tell you, it's unattractive when a man wants it too much. Those guys go home alone to look at blank box office receipts. 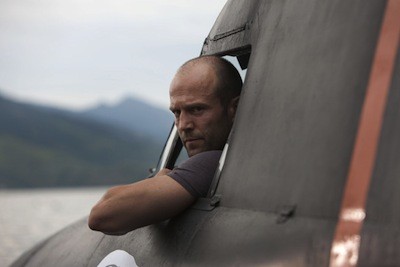 On my way to see The Expendables, I actually got into an argument with a comic book store clerk about the movie Cobra. (I know, nerd alert!) He was of the opinion that Sly's 1986 cop flick was great, I am convinced that it was awful. His defense was the standard "You expect too much out of something that isn't meant to be more than it is," which is more often than not a cop-out. Should we not expect a movie to be shot, edited, written, or performed well just because it's supposed to be about big dumb action? Cobra was none of those things, and neither is The Expendables. I would also argue that both of those movies use that "it is what it is" excuse to try to take advantage. Both are far too self-conscious about what they are meant to be. From the opening shot of The Expendables, with the crew riding into town on their motorcycles, Stallone is shoving his self-awareness in our face, I guess hoping we won't also see the glistening of flop sweat. "Look! I got the Governator! I got Ivan Drago! And the title is ironic, coz you can't do without us!"

To be fair, The Expendables was not all that terrible, nor were my expectations as high as all my girlyman whining might suggest. All I really wanted was a movie that was in the violent ballpark of Rambo and that didn't pause too much for some lame story. Though The Expendables takes way too long to get going and has some snoozeriffic detours into territories that are all about guys' feelings (yuck!), once the action starts happening, it can be very good and sometimes even an adrenaline-pumping delight. Jet Li and Jason Statham in particular are incredible, their physical prowess even managing to make the extremely bad digital effects livable. There are two good car chases, a couple of solid shoot outs, and some hand-to-hand that really works. Credit to Stallone, too, for letting the other guys show him up. He's really a slow-edit guy in a fast-edit world these days. Seeing him run was so painful, it gave me shin splints just by watching it.

Still, there's not enough action to really recommend The Expendables--especially since every time the fighters take a breather, their movie goes back to being boring again. "It's really good, except the 2/3 of it when someone is talking" isn't really a poster quote. This is something to watch at home, on the cheap, hopefully with a revolutionary DVD "all action" special feature that just skips straight to the bloody parts and cuts out the rest. 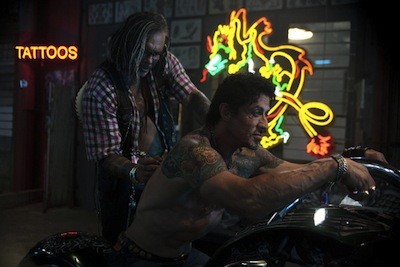