Image // Unrated // September 14, 2010
List Price: $99.98 [Buy now and save at Amazon]
Review by Stuart Galbraith IV | posted September 18, 2010 | E-mail the Author
Submitted for your approval one Stuart Galbraith, film buff, age forty-four, a man with a chip on his shoulder the size of the national debt. You walk into his TV room at your own risk. That's because he belongs to that treasured American institution known as the obsessive collector. Like the philatelist in Syracuse or the ad executive in Binghamton whose model locomotives rival the train yards of the MTA, he wiles away the hours fretting over forgotten B-movies and two-reel comedies, in a digital shrine to dreams made of celluloid, terrified some new technology will overnight render his treasure trove obsolete. Stuart Galbraith, film buff, whose PlayStation 3 remote will soon catapult him into ... The Twilight Zone.

It's back. Again. This time on Blu-ray. And that dreaded word "upgrade" rears its ugly head. "I'm a consumer. That's what I am - I'm a consumer!"

For fans of Rod Serling's superlative, iconic 1959-64 anthology series, home video has been a boon and a bust (to the wallet), this reviewer included. After years of television syndication, which by the 1980s meant chopped-up 16mm TV prints, Columbia House's remastered VHS tapes became available in the mid-1980s, shipped monthly with just 3-4 episodes per at the princely sum of about $35/month. But, for the time, they were a revelation. The dawn of DVD saw these same masters released commercially from 1998-2001 over 43 volumes, but these too were notably pricey. Next came five chronologically jumbled DVD sets in 2004/2005, but those weren't completely satisfying, either.

Finally, in 2004, Image Entertainment began releasing the series in season sets, in broadcast order, in a "Definitive Collection" that really seemed to live up to its name. The (again) remastered shows looked absolutely fantastic, and each set was crammed with all manner of extra features: audio commentaries, vintage audio- and new on-camera interviews, rare film and taped recordings of Serling himself, lecturing about Twilight Zone and writing for television generally. And lots more. It couldn't be bettered.

And now along comes The Twilight Zone - Season 1, Blu-ray version. With an SRP of just under a hundred bucks (i.e., $60-70 after standard Internet discounts) it's a steal for those new to the series, or who've waited until now to buy. But what about those of us who've been investing in Twilight Zone all along? 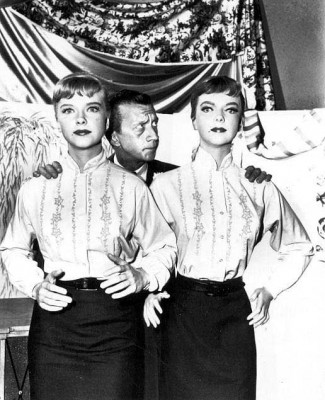 To be perfectly honest, were I not reviewing this set I probably would have given this a pass, figuring quite reasonably that a) my "Definitive Edition" seasons sets were serving me just fine; and b) I've seen these shows so many times over the years, and thus didn't feel compelled to run through the entire series again, so soon after polishing off the last DVD incarnation.

But, after ravenously devouring most of these Blu-ray shows, this is one upgrade that's really justified. There are lots of new extras - new audio commentaries, isolated music scores, and a heretofore unreleased quasi-pilot, "The Time Element." But what really stands out are the shows themselves. Some of these I know practically shot-for-shot yet I was continuously dazzled by the added high-def clarity, so good that on big screen TVs you can actually count the stubble on Earl Holliman's beard, in the very first Twilight Zone episode, "Where Is Everybody?"

Unlike fellow anthology host Alfred Hitchcock, who rarely directed the episodes he "presented," Serling wrote or adapted a backbreaking 28 of the first season's 36 shows. This insanely Herculean undertaking soon took its toll and Serling's fifth season teleplays come nowhere near equaling even an average first or second-season offering. He burned out fast, hard, and never really recovered. The remaining episodes this season were scripted by genre masters Richard Matheson and Charles Beaumont, while several others Serling adapted from stories by George Clayton Johnson; all would be instrumental to Twilight Zone's success and overall style.

One writer conspicuously absent is Ray Bradbury, who likewise enthusiastically planned on throwing his hat into the ring, but whose growing disenchantment with Serling, springing partly from their shared wistful nostalgia for small town Americana of a bygone age, a coincidental common ground that Bradbury took as literary thievery.

Indeed, Twilight Zone spent almost as much time in legal arbitration as on the floor of its MGM soundstages and Culver City backlot, for its stories raided innumerable sci-fi and fantasy chestnuts - time travel stories, premonitions of death, deals with the Devil, doppelgangers, etc. - basic concepts amateur and professional writers naively believed to be uniquely theirs; Serling never but never knowingly adapted someone else's ideas without credit.

In fact, he championed his fellow writers while disparaging just about everything else about the show (if these audio recordings provide any clue) - especially his own work. There was no greater contradiction on TV: the writer who continually publicly condemned the sponsor-driven demands of network television also unhesitatingly whored himself out as an on-camera pitchman for every product imaginable. He just couldn't resist the allure of being the hit of Hollywood's most exclusive cocktail parties, with the chain-smoking Serling simultaneously biting the network and sponsors that were feeding him while basking in the glories and celebrity it provided him.

Twilight Zone's first season is not its finest though its fifth episode, "Walking Distance," starring Gig Young as an overworked executive revisiting the small town of his youth, gets my vote as Twilight Zone's greatest episode. Extremely Bradbury-esque, it makes nostalgic good use of MGM's Meet Me in St. Louis backlot street, features a revelatory performance by Young, and is probably composer Bernard Herrmann's best-ever score for episodic television. Serling's dialogue is at times quite beautiful.

The series was still finding its way and some episodes, like the One Step Beyond-ish "Perchance to Dream," with Richard Conte terrified a woman in his dreams will murder him for real, or the Alfred Hitchcockian Escape Clause, with hypochondriac David Wayne making a pact with Devil Thomas Gomez, are a bit off-center. Over time Twilight Zone episodes could almost be grouped into various sub-categories: some fantastic invention or phenomenon turns an insignificant man's life topsy-turvy (as when inveterate reader Burgess Meredith finds himself the last man on earth following a nuclear holocaust in "Time Enough at Last," arguably Zone's single best-remembered episode), oftentimes the proverbial man in the gray flannel suit who re-examines his life, as in "Walking Distance" or the nearly-as-fine "A Stop at Willoughby." Others are dreamlike or nightmarish, like "And When the Sky Was Opened," about returning astronauts who, recovering in hospital, terrifyingly drift off into non-existence.

For this reviewer, The Twilight Zone episodes that generally play best are compact character-driven pieces, two or three protagonists working through a basic dramatic conflict, as in "I Shot an Arrow into the Air," with astronauts, their rocketship having crash-landed, struggling to stay alive on a desert planet, far from home; and "What the Hell's Going on Here?" shows, as in "The After Hours," about a prickly young woman (Anne Francis) and her encounters with a strange saleslady (Elizabeth Allen) on the 9th Floor of a department store that only has eight floors.

George T. Clemens, a veteran DP who photographed almost every Twilight Zone, helped give it its "house style," much like MGM's backlot and its other resources did - sets and costumes from Forbidden Planet (1956) were constantly being cannibalized for the show. Producer Buck Houghton kept it together for its first three seasons, amazingly bringing most episodes in for around $50,000 apiece. Yes, that's fifty thousand. By way of comparison, that's less than 1/10th the per-episode salary of each star of Friends, during that show's later seasons.

Other outstanding episodes this season include "The Lonely," with female robot Jean Marsh keeping convicted felon Jack Warden company on a lonely asteroid; "Third from the Sun," about two families trying to flea a totalitarian society before it destroys itself; "The Monsters Are Due on Maple Street," an effective study in paranoia and fear-driven mob rule that's timelier than ever; "Long Live Walter Jameson," about a mysterious college professor (Kevin McCarthy, who in life was nearly as ageless as this episode's title character); "The Big Tall Wish," featuring an excellent performance by Ivan Dixon as a down-and-out prizefighter; and "A World of His Own," a wryly amusing tale of a playwright (Keenan Wynn), his shrewish wife, and comely mistress. The only real dud in the set is "The Mighty Casey," but that's partly because the episode was hastily reshot after its dying guest star, Paul Douglas, passed away before airtime. Though the show was completed and in the can, Douglas reportedly looked like death warmed-over and against almost unanimous objection Serling himself financed the retakes, with Jack Warden taking Douglas's place. Unfortunately, the remake is stillborn and the Douglas footage apparently no longer survives.

"And now a word from our alternate sponsor."

While other shows are more urgently in need of high-def upgrades (e.g., Lost in Space, M*A*S*H), Twilight Zone nevertheless is positively splendiferous in high-definition. The last batch of DVDs looked outstanding. These, in 1.37:1 pillar-boxed format, are even better, significantly so. There's not that much more to add; Twilight Zone had few effects/special makeup-type shows its first season, and except for a bit of stylization here and there (as in "Third from the Sun," with its oblique angles) it's mostly standard late-'50s television photography. But the added detail is remarkable, and in a weird way it enhances the intimacy between the viewer and the actors, particularly in close-up. Now it's almost like sitting in the first row of a theater, watching a performance. The uncompressed PCM mono audio is likewise strong, though in a few episodes I found the music track mixed too low. The five discs are region "A" encoded. Menu screens are easy to navigate.

New among the mountain of supplementary features is "The Time Element," a 1958 episode of the Westinghouse Desilu Playhouse, an anthology series hosted by Desi Arnaz (wife Lucille Ball puts in a brief appearance after the main program). The hour episode is classic Twilight Zone: New Yorker William Bendix tells psychiatrist Martin Balsam about a recurring nightmare, that for some reason he dreams he's in Honolulu the day before the Japanese attack on Pearl Harbor. Though it's a story done a gajillion times before and since, Serling's teleplay is unusually effective, with a commendably character-driven narrative that offers a few surprises. Filmed in 35mm, like Twilight Zone, this feature looks as good or better than the other episodes, a joy to behold.

Also exclusive to the Blu-ray are 19 new audio commentaries by a batch of TV historians, music experts, and surviving cast and crew members, a makeup similar to the group Image dug up for their near-concurrent release of Thriller - The Complete Series. Also included is a kinescoped episode of Tales of Tomorrow, interesting if prehistoric by comparison, with an earlier version of "What You Need," later a first season Zone; more audio and on-camera interview and episodes of the Twilight Zone radio series; and, best of all, isolated music scores for 34 out of the 36 episodes; now I can finally retire those worn LPs.

All or nearly all of the "Definitive Edition" DVD extras are included as well, notably innumerable commentaries - some, like Martin Landau's for "Mr. Denton on Doomsday" being superb while others are a bit disappointing, like Burgess Meredith's archival interview from around 1977, in which he had little to say about his four Twilight Zone appearances. (Nothing, however, can top Mickey Rooney's Dadaesque track for Season Five's "Last Night of a Jockey.")

Stuart Galbraith, film buff. The threat now vanquished but the obsession unsatiated, pondering the fate of his next upgrade. File this one under "B" for "Blu-ray" - in the Twilight Zone.

This review is dedicated to Anne Francis and to the late Kevin McCarthy.