Running strong since 1984, the Teenage Mutant Ninja Turtles franchise has been an arguably solid fixture in pop culture. Despite its roots as a dark, somewhat absurd spin on the idea of a superhero, it managed to break out as a , dropping much of what made the comics memorable in favor of colorful villains and general goofiness that ended up being a load of fun. Three years later a live-action film fully cemented Leonardo, Donatello, Michelangelo, and Raphael into pop culture history. However, like many franchises it was quickly run into the ground with a lesser, but still enjoyable sequel and one final live action film that is best-left unmentioned.


However, the Turtles would not die and in 2003, another cartoon series was launched. Devoid of the over-the-top villains and shenanigans of the '87 series, this series would run for seven years. In the meantime the Turtles attempted a big screen revival with a fun, but ultimately unsuccessful CGI outing, "TMNT." Now, 26 years after they were born, there was one avenue left to take: the crossover special. 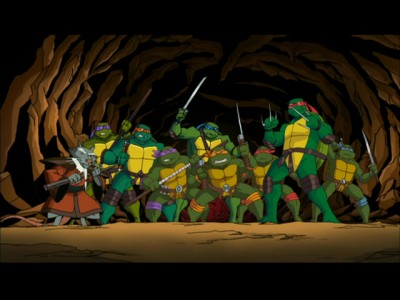 "Teenage Mutant Ninja Turtles: Turtles Forever" is a TV-movie under the banner of the 2003 series, a fact that will be very apparent to anyone familiar with any other incarnation of the Turtles. Taking far too long to set itself up (nearly 20 of the roughly 70 minute runtime), the feature establishes the more serious tone of the 2003 series and a strong disdain for the 1987 series. Through time travel shenanigans fitting of the 1987 series, the familiar, more jovial quartet finds themselves quickly at odds with their 2003 counterparts, who, to their credit take the moniker of "ninja" more seriously.


The creators of "Turtles Forever" really try and sell possible newcomers (like myself) on the '03 Turtles, shamelessly reducing the classic '87 Turtles to a bunch of clueless, sickeningly upbeat, buffoons. It doesn't end there, as the paper-thin plot that doesn't really reveal its ultimate purpose until around the 50 minute mark, drags '87 Shredder, Krang, Bebop, Rocksteady, and the entire Foot Clan along for the ride. While this does provide a great dual-team co-op battle outside the Technodrome, it also leads to the neutering of '87 Shredder as a credible villain. While largely foiled on a weekly basis by the '87 Turtles, Shredder was no joke, a force to be reckoned with and physically capable of taking on any of the Turtles in combat. Shredder here is as inept as the green thorns in his side and is quickly replaced by the '03 equivalent, a bizarre space alien in a cybernetic suit. The utter disrespect for his character an the '87 franchise in general is summed up by a throwaway gag with '87 Shredder chasing after his chair while '03 Shredder establishes himself as the film's true villain. 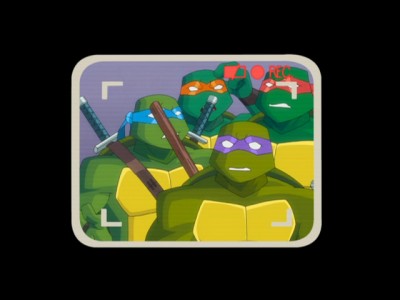 I don't have a single problem with any of the '03 characters and to be honest, "Turtles Forever" does sell me of giving the '03 series a chance, but I would by lying if I said the cheap shots are pathetic and get old immediately. I make no reservations regarding how well the '87 series holds up, the little bit I've revisited was fun, but more than a little corny. I understand what fans of the '84 comics hated about it, but do respect it for carving out its own place in the franchise's history. However, to completely "retcon" an entire series to make your own characters look more appealing is inexcusable. The only thing the series comes close to getting right is a group of decent sound-alike voice actors; the Shredder in particular sounds pretty good. In fact, the voice acting is solid on all levels, with all incarnations of the Turtles having a unique sound and style.


The version of "Turtles Forever" here is the same version that aired on TV, which may upset some fans who viewed it online in an extended director's cut format. The list of cut scenes seem mostly inconsequential, but it did look like some nice subtle character moments were scrapped towards the end of the film, that could have helped the largely anemic story. Time travel and the destruction of the Turtles by the '03 Shredder is the easiest summary and fortunately the writers didn't cheap out and give fans a final act that might soften the insulting mess that preceded it. I won't give away anything in detail, but if you're a fan of the '84 Turtles, you need to see this movie. 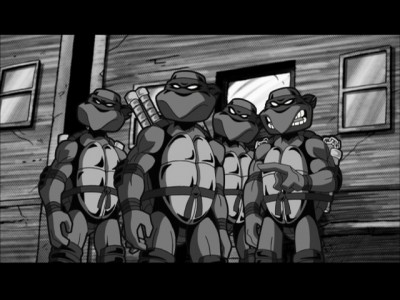 Ultimately "Turtles Forever" is mostly forgettable endeavor and the final act is all a viewer is likely to remember. Fans of the '03 Turtles will most likely be satisfied with the result, but for an old-school Turtles fan, I really wish this program didn't exist. The film's final act is too little too late to try and repair the damage inflicted on the '87 Turtles and that series' villains never receive any apology, in fact the opposite occurs, they get their noses rubbed in disgrace one final time. If I could offer an analogy for how useless this program is, I'd have to point to "Star Trek Generations." The '87 Turtles are brought in to sell discs just like Shatner was brought in to sell tickets to non-Next Generation fans. The only difference is at least "Generations" let Captain Kirk resemble Captain Kirk, despite discarding him for cheap shock value. The '87 Turtles are afforded no such luxury. To cap things off, I was sad Elias Koteas wasn't outside my house with a garbage truck to give this film the treatment it deserves.


The 1.78:1 non-anamorphic transfer is inexcusable for a 2010 release. While the transfer is generally strong and defect free, the color palette feels a tad muted and the clarity is too soft. The film's final act is easily the best looking part of the disc and it's a true shame the transfer doesn't utilize the maximum possible resolution.


The English Stereo audio track is quite strong although effects, vocals, and music are all mixed around the same level. Action scenes have much more "oomph" than one might expect from an animated TV feature. Despite the sometimes overly amplified vocals, there is no distortion.

A shining example of why crossovers are most often a bad idea "Turtles Forever" only succeeds in making me smile in its final 15-minutes. I don't bear any grudges against the '03 Turtles; they are an interesting lot and I will likely give their series a try. I do shake my head in disgust at the writers who so callously dismissed an entire generation's version of the Turtles for reasons unknown. Fans beware, "Turtles Forever" will likely raise your dander, but still give it a rental for that one last surprise, but don't waste your money on a disc that can't even get the technical side of things right. Rent It.