Paramount // Unrated // October 5, 2010
List Price: $36.98 [Buy now and save at Amazon]
Review by Stuart Galbraith IV | posted October 29, 2010 | E-mail the Author
Other than a slightly rearranged main title theme, there's not much to report from the front lines of Gunsmoke - The Fourth Season, Volume 1, the first half of the 1958-59 season, that wasn't already stated in my reviews of the first season, the the second season, volumes 1 and 2,and the third seasons, volumes 1, and 2. That last volume was released back in May 2009, and many were beginning to wonder if CBS/Paramount had given up on the two decades-long series just as it was peaking, well before the format changes from a half-hour to an hour (in 1961) and from black-and-white to color (in 1966), to say nothing of co-star Dennis Weaver's departure in 1964.

But here it is, and Volume 2 has already been announced for mid-December. Except for a few cosmetic changes - Milburn Stone's hair isn't dyed gray like it used to be, Marshal Dillon uses his gun more, there's more location work this season, and there seems to be a concerted effort to expand the recurring characters of Dodge City - it's still the same fine show. Gunsmoke was the Number 1 prime-time series for the second year in a row, but then its competition - Cimarron City on NBC, Sammy Kaye's Music on ABC - wasn't exactly formidable.

The 19 episodes in this set, spread over three single-sided, dual-layered DVDs, look fine as always. An amusing extra is included: "How to Cure a Friend," a Second Season show inadvertently replaced on The Second Season, Volume 1, with the similarly titled Season Four episode "How to Kill a Friend." Both episodes are included here, correcting that understandable error. 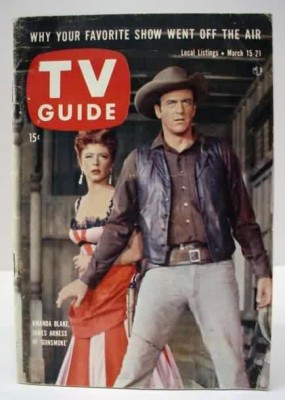 U.S. Marshal Matt Dillon (James Arness) and his eccentric, game-leg assistant Chester Goode (Dennis Weaver) are still maintaining the peace in unruly, barely-tamed Dodge City, Kansas. The various gunslingers and cattle rustlers causing Marshal Dillon no end of grief usually can be found drinking and gambling at the Long Branch Saloon. There Matt's friend Miss Kitty's (Amanda Blake) works as a (coded) prostitute, though officially she's the saloon's proprietress. (Her duties seem to be shifting more toward the latter and away from the former by this time.) Matt's line of work often requires the services of cantankerous Doc Adams (Milburn Stone) - Matt, Chester, and Miss Kitty's other close friend.

Writer John Meston (1914-1979) was to Gunsmoke what Rod Serling was to Twilight Zone; he penned an incredible 257 episodes of the series during its 20-year run - and that's not counting episodes of the radio show he also wrote (though there was a lot of crossover, apparently). Of the 19 episodes in this set, Meston wrote or co-wrote 18 of them. Two of his favorite devices are the "What's Going On Here?" and "How's Matt Going to Solve/Get Out of This?" structures, with Matt presented with a puzzling situation/irresolvable conflict at the beginning of the episode, with him and other characters working through the mystery which is revealed/resolved, often violently, at the end. A favorite plot Meston did myriad riffs on has cool cucumber Matt withholding judgment on an accused killer's guilt or innocence while all of Dodge City is ready to lynch the accused. Sometimes in these shows the accused is a friend of Matt's, like Chester, sometimes he's a guest star, like Charles Bronson in this set's "Lost Rifle" episode, but always, even with a mountain of evidence stacked against him, as in another early Fourth Season show, "The Patsy" (and The Big Valley's Peter Breck), Matt remains calm and just.

You'd think all this repetition would have a negative impact on the show, but there's enough variation of genre standards so that Gunsmoke still plays remarkably fresh. In between half-season sets I've watched several of the later hour-long, color shows, and even one of the latter TV movies, in which Arness's leathery face is almost indistinguishable from his saddle, and while those later Gunsmokes are much less vibrant, more generic and "family-friendly" in some respects (though still entertaining, if only for their familiar characters), the black-and-white, half-hour Gunsmokes are sometimes outstanding and usually at least well above average.

The ratings helped, no doubt, and unlike late in the show's run, Gunsmoke here is obviously enjoying the healthy budget the highest-rated shows could demand. In this set, I was surprised how much of Gunsmoke is shot on location, and not on the short trips to overused locations like Iverson Ranch (in Chatsworth, a 30-minute drive from central Hollywood) or Bronson Canyon (in central Hollywood). Indeed, a few episodes featured unusual locations I didn't recognize at all, and these shows often featured a surprising number of extras for series television, adding to Gunsmoke's movie look of this period. (By the middle of its run, Gunsmoke came to rely on studio sets, even for most exteriors, including Dodge City's main street.)

The early fourth season shows were mostly helmed by actor-turned director Richard Whorf, who'd soon move on to CBS's other hit show from this era, The Beverly Hillbillies. The rest of the season (episodes chiefly though not entirely confined to Volume 2), however, was dominated by directors Ted Post, Andrew V. McLaglen, and Arthur Hiller, all of whom would have prominent feature film careers not long after, the first two in Westerns particularly.

I didn't watch every episode but a few stand out. The season premiere is notable for featuring veteran character actor Robert J. Wilke as Wild Bill Hickok, intriguing casting to say the least. "Gunsmuggler" is a good example of the series' undiminished hard-edge: when a band of Pawnee renegades brutally murder a family of eight, Matt becomes determined to see the white gun smuggler that sold them rifles hang. In "Land Deal," guest stars Murray Hamilton and Ross Martin are so busy fighting over Nita Talbot (very young, almost unrecognizable) that they fail to notice the land agent is stealing them blind. It's a tense, well-acted episode.

Once again, Gunsmoke looks exceptionally good on DVD. Shows are bit overly grainy but otherwise very sharp, very clean. The 19 black and white episodes are spread over three discs, with a total running time of about eight hours and 17 minutes. The Dolby Digital mono (English only) is clean and clear, and the show is closed-captioned. The packaging allows viewers to read the episode descriptions inside the snap case without having to remove any of the discs.

Except for the aforementioned "How to Cure a Friend," there are no new extra features.

Western fans who only remember Gunsmoke's later, less interesting color and hour-long shows really ought to give these taut half-hour, movie-like and, at times, unexpectedly grim ones a try. Only Have Gun Will Travel is, for the period, on the same level quality-wise within the television Western genre. Highly Recommended.