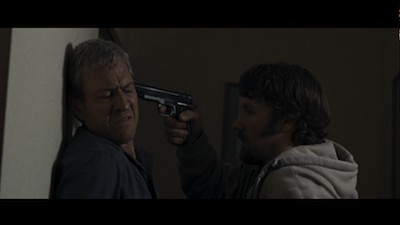 This is my second go-around with The Square. I first took myself to see it on a Saturday night at the movie house. I had heard good things about Nash Edgerton's stylish Australian thriller, and it sounded like it was right up my alley. Unfortunately, while I was prepared for a tense and hard-knuckled crime movie, my reaction to what I saw was a little flat. The Square was extremely well made, but I never found myself getting sucked in. It was like someone had popped the hood on a particularly fancy car and I was standing there watching its engine run, but I never got behind the wheel to feel the full effects of all those great mechanics.

This surprised me. It was the exact opposite of what I had thought I would take away from The Square. My friend I saw it with felt the same way, though, and over drinks, we began to wonder if it was just the circumstances of the screening. No sooner had we gotten the old man with a hearing problem who talked through the first hour to quiet down than some inebriated thirtysomething ladies stumbled in, sat in the back corner behind us, and started trying to catch each other up on what was happening. Maybe it was all the distractions that did it. After all, the movie is a pressure cooker and to fully appreciate the flavors of its concoction, the lid has to be on tight. It might have also been a mistake for them to show Edgerton's short film Spider beforehand. That shock-you-out-of-your-seat ending was hard to follow. (And, smartly, they tuck it away in the bonus section on the DVD rather than setting it up as a double feature.)

I vowed there and then to try The Square again when it was released on disc. The beauty of DVD is that it provides second chances for films like The Square. Not only does it allow a small suspense movie to find its way to an audience that might not have otherwise had a chance to see it, but it also provides a good way to take a second sample something that might not have gone right the first time. Change the circumstances, watch it in the privacy of your own home.

The long and short of The Square's plot is this: construction developer Ray Yale (David Roberts, Ghost Rider) is working on a job from hell building a luxury resort that has, at its center, a big square where Jacuzzis and the like will provide visitors with all the extravagant downtime they require. Ray is looking to get his own downtime. Bored with his job and stuck in a stagnant marriage, Ray cuts a backroom deal with a cement contractor (Kieran Darcy-Smith, The Reef) for a healthy kickback so he can run away with his mistress, Carla (the fetching Claire van der Boom, also seen in the Australian episode of HBO's The Pacific). Carla is married to a small-time crook named Greg (Anthony Hayes, Ned Kelly) who just came into a big-time score, and when Carla discovers his stash, she sees a faster and more lucrative route to her and Ray getting out. The two plot to burn the house down and steal the money, and to do it, they hire Billy (Joel Edgerton, who also co-wrote the script), a firebug who can rig the Christmas lights to malfunction while everyone is out of the house for a holiday festival.

Except, as it turns out, not everyone actually is out of the house, and that ends up being only the first of many things that go wrong. The Square is a scrappy indie potboiler that moves swiftly and parlays its natural atmosphere into something effective and believable. At least up to a point. 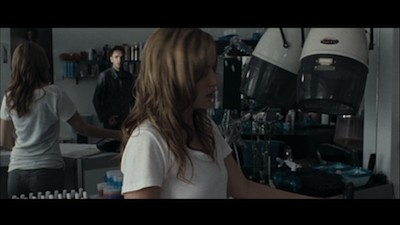 The Square has been compared everywhere and in every which way to the Coen Bros. film Blood Simple--and I'm afraid I can't break that tradition. It's not just the adultery plot and the bag of money, it's also the style: the moody lighting, the agile camera that pushes in on its subjects and ably careens through scenery to show us what they are up to. Both films build their tales within the tight quarters of small towns, putting to use the interconnectedness that comes with everyone knowing everyone else. Ray employs a skeevy mechanic named Leonard (Brendan Donoghue) on his job site, and Leonard also happens to be one of Greg's crew. Ray and his wife are also friends with a woman who works with Carla at the beauty salon. Even Greg's dog and Ray's dog are pals, and in an act of pure animal instinct, Greg's pooch keeps swimming across the lake that separates their houses to see his canine sweetheart. There is no way out when, every time you turn around, someone who knows you is standing in your way.

The script for The Square was co-written by Joel Edgerton and Matthew Dabner, and for about an hour or so, it really works. Nash Edgerton is a working stuntman, and I think his experience on film sets has given him an inherent sense of how things work. He's particularly deft at coordinating action, both large and small. There are a lot of things to keep track of in The Square, and he keeps a confident hand on all of them. He is never overly showy in how he moves a camera, and he keeps his actors subdued, letting the gravity of the situation dictate their performances. (One thing the movie lacks that the Coens had and maybe The Square needs is a sense of humor, even a black one. Outside of some dark business with a shark, there is no levity to be had here.) He understands the strictures of genre and also has a good feel for how to keep the story moving.

Genre also ends up being his downfall, however. A film like this relies on things going wrong and on bad circumstance to keep piling on its characters. It's tough to know when enough is too much, and for me, The Square crosses the line midway through. There are quite a few twists too many (including one with a baby that ends up being the last straw) and the movie loses all of its sense of intrigue. It put me right back to that place where all I could see was the engine humming. The plot kept chugging along, but I was all too aware of how clinical the execution had become. The change-ups and turns were so prevalent, I started to think there was a formula, like the writers had decided that there needed to be a twist every five pages, until the whole thing is gnarled and pretzeled and it's hard to tell who is coming and who is going.

To the credit of the filmmakers, they manage to unravel everything, no matter how tangled the story gets. I can't think of any threads left dangling, no characters shuffled away and not answered for, which in itself is pretty impressive. I also never got bored, even when I was sitting there dissecting the story structure. You can tell that these guys are going for broke, taking the opportunity to make their film and really running for it. I may have wished I liked The Square more, but I still liked it. Hell, I'd probably watch it a third time if the opportunity came up, and I'll be in line to watch the next Edgerton production, no question. 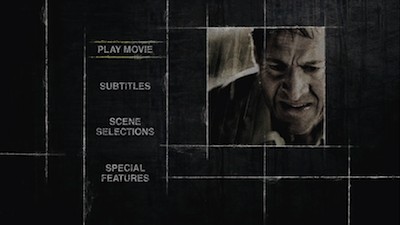 Video:
The 2.35:1 anamorphic transfer of The Square looks fantastic. The film has an appealing grit to it, with lots of cool colors and natural lighting. Having seen it in both a theatrical setting and now on disc, it seems the moody intentions of Nash Edgerton and cinematographer Brad Shield have been appropriately realized, bringing their murky thriller to audiences in all the murky ways intended.

Sound:
The 5.1 audio track on this disc is also fantastic, possibly even better than the image in terms of technical quality. There are a lot of effects here that play up the naturalistic atmosphere of the movie and contribute to the immersive experience that a thriller like The Square demands.

There are optional English subtitles, both in a standard format and for the deaf and hearing impaired.

Extras:
There are quite a bit of extras on The Square, including a whopping fourteen deleted scenes, clocking in at just over 25 minutes. These are largely connective scenes and extra bits that were originally shot in order to flesh out the characters. We see more of Ray and Carla dreaming, for instance, and a lot more about Billy's life on the side, including some indication that he really needs the money Ray promised him. Also, just a bit more about that shark, which is a detail you almost miss in the movie (in fact, some might miss it, and thus one particular scene won't make a lot of sense). All of these are fairly insubstantial, though, and Nash Edgerton--who edited the film with Luke Doolan--was right to drop them. They'd have slowed The Square down too much. 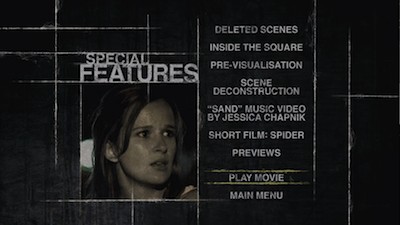 There are several featurettes that take us backstage to examine the making of The Square. At nearly half-an-hour, "Inside The Square" takes us on set and into how the movie was put together, granting us the kind of all-access pass that good indie movies can usually afford its audience (as opposed to the slick Hollywood shine jobs on most DVDs). Pre-visualizations and scenes deconstructed give the specific nuts and bolts of individual scenes. As the names suggest, one shows the planning for more complicated sequences while the second shows us the stages of creating effects shots. It's actually quite illuminating.

There is a music video for a song from the movie, Jessica Chapnik's "Sand." I am guessing Nash Edgerton directed it, and it not only features scenes from The Square but adds to them. Chapnik sings amidst a mini drama featuring the arsonist Billy and his girlfriend (both actors from the film reprise their roles). The song isn't that great, but it's a neat little video.

The star of the bonus section is Nash Edgerton's fright inducing short film Spider. This tale of terror on the highway is something best watched cold, so just put it on and be prepared to gasp and scream and annoy your neighbors. Fair warning, though, folks with aversions to violence involving motor vehicles might want to steel themselves for it or avoid Spider altogether.

Finally, there are some theatrical trailers for various other movies.

FINAL THOUGHTS:
The Square is a tight thriller from down under. This Australian indie about an adulterous couple and their disastrous scheme to break free is full of twists and turns and has an excellent natural atmosphere. It works for the most part, though, eventually, the skill and technique overwhelm the plotting and the mechanics become so obvious it detracts from the tension. Still, the good outweighs the bad, and an excellent overall DVD package means The Square is definitely Recommended. 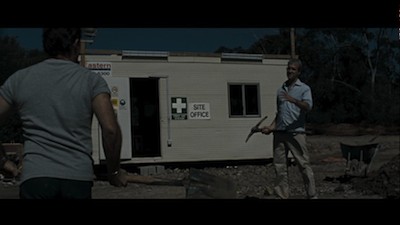