Paramount // Unrated // November 2, 2010
List Price: $29.99 [Buy now and save at Amazon]
Review by Stuart Galbraith IV | posted November 18, 2010 | E-mail the Author
The year's not over, but I'll go out on a limb and say White Christmas (1954) is the best-looking classic film release on Blu-ray this the year. The first film shot in the large-negative VistaVision process, the super-sharp, super-rich Technicolor-printed image is ideally suited to the Blu-ray format, and except for the opening titles and a few dissolves in the first reel, is absolutely stunning. Watching it on a big widescreen TV comes close to the same feeling of awe one experienced with pristine 70mm roadshow prints in the big downtown palaces decades ago.

No technology is going to make a silk purse out of a sow's ear, but in the case of White Christmas the super-enhanced image really does monumentally improve the viewing experience, a giant leap even from the fine standard-def DVD version. Because the film's story and characters are secondary to its Puttin'-on-a-Big-Show aspects - its script little more than an excuse to have its four stars sing Irving Berlin's songs and dance as much as possible - the difference between previous home video versions and this new Blu-ray is like the difference between seeing a show from the third gallery and in a front-row-center orchestra seat. The high-def image allows a much greater intimacy with the performers, while visually the costumes and set design are more easily appreciated. I had always thought White Christmas merely okay, not great - but on Blu-ray I didn't want it to end.

Rather than simply recycle older supplements, Paramount has gone the extra mile to include six short but satisfying featurettes, all in high-def. 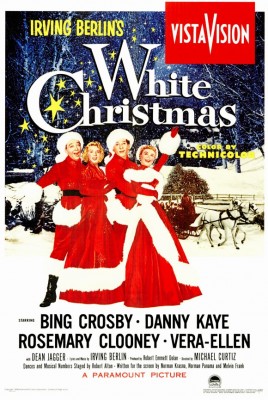 On the front lines in Europe, Christmas Eve 1944, Captain Bob Wallace (Bing Crosby), a famous singer, and Private Phil Davis (Danny Kaye), an aspiring songwriter-performer, are staging a Christmas show that's also a send-off for their much-loved commanding officer, Maj. General Thomas F. Waverly (Dean Jagger), unceremoniously relived of his command. (Reader Sergei Hasenecz adds, "despite making allowances for this being a musical, even as a kid I was struck by the pure absurdity of G.I.s on a battlefield singing their departing commander off with 'Because we love him! We love him!'")

After the war, Bob and Phil team up and become the toast of Broadway. (One drawback to the super-sharp VistaVision format: in a montage of Variety headlines, the same issue number is plainly visible - Vol. 42, No. 96.) Phil is growing weary of the back-breaking schedule, and plots to get his partner settled down with a wife and kids. (This allows for an interesting shift, with Bing getting conned by comedian Danny instead the usual patsy-comedian/grifter-Crosby type dynamic.) They audition a sister act: nightclub singers Betty (Rosemary Clooney) and Judy (Vera-Ellen), whom they later help out when the girls' angry landlord secures an arrest warrant when the sisters fail to pay on a supposedly damaged rug. The foursome ends up traveling together to Pine Tree, Vermont - a winter resort area where the sisters are booked. At the Columbia Inn, Bob and Phil are surprised to learn that the owner is their former commander, the retired Maj. General Waverly, who operates the picturesque hotel with the help of granddaughter Susan (Anne Whitfield) and nosy housekeeper Emma Allen (Mary Wickes).

Unfortunately, there's no snow and hence no customers, and the general is facing financial ruin for lack of business. Wanting to help, Bob and Phil join the girls' act and later send for their New York company, sets and all, and further enlist the aid of Ed Sullivan-like TV variety show host Ed Harrison (Johnny Grant, later the longtime honorary "mayor" of Hollywood).

And that, such as it is, is the plot. It ain't much, and there's some terribly phony suspense in the second act when Betty and Emma mistakenly think selfless Bob is actually trying to cash in on the old man's misery. But thanks to stars' sincere performances and the unexpected but effective casting of Dean Jagger - a stern-looking authority figure whose delicate, vulnerable speaking voice make a strange, beguiling contrast - really pays off. When Bob and Phil surprise Gen. Waverly with a 10-year reunion of his old command, by God this shameless bit of schmaltz actually works.

Bigger than Jagger though was VistaVision itself. "Paramount Proudly Presents the First Film in VistaVision - Motion Picture High Fidelity," the credits begin. Simply put, VistaVision used conventional 35mm film that, instead of running through the camera vertically, like regular 35mm, passed in front of the lens horizontally, like 35mm still cameras. This exposed individual frames that were about twice the size of conventional 35mm movie film, resulting in a much sharper, steadier image.

To get the full impact of VistaVision, the film needed to be projected horizontally as well, but that was limited to just a few premiere engagements. Normally, theatrical prints were reduced to standard 35mm, which theoretically produced an image superior to conventional 35mm. However, back when this reviewer was regularly going to revival houses, from the 1970s to the 1990s, 35mm prints of VistaVision films usually looked terrible. Probably this was because these were second- or third-generation prints derived from vertical 35mm inter-negatives rather than the original horizontal VistaVision negatives.

In any case, the reissue of Alfred Hitchcock's Vertigo (1958) in 1996 revealed just how spectacular VistaVision could look when carefully transferred to a high-resolution format like 70mm. Blu-ray has opened this up even further: The Searchers (1956) and North by Northwest (1959) both look spectacular in high-def*, as do Sleeping Beauty (1959), The Music Man (1962), The Leopard (1963), The Pink Panther, and Zulu (1964), those filmed in Technirama, basically VistaVision plus an anamorphic squeeze.

What's exciting about this is that not only will (presumably) upcoming Blu-ray releases like The Ten Commandments, Funny Face, Gunfight at the O.K. Corral all look great, but even minor films like The Sad Sack, Escapade in Japan, and Hercules and the Captive Women, along with a few British and Japanese entries like Hell Drivers, Ill Met by Moonlight, and Buddha have the capacity to look spectacular.

White Christmas uses the new format conservatively but well. Oddly, there are probably less than a dozen actual exterior shots, and those are limited to two shots of a speeding train and two short scenes at a Vermont railway platform. The rest of the film is all soundstage interiors and exteriors, such as the opening scenes set in a village pummeled into oblivion by artillery shelling. The film has none of the travelogue or audience-participation effects of VistaVision's forebears, Cinerama and CinemaScope.

However, the extravagantly appointed sets and outstanding use of color make White Christmas a feast for the eyes from beginning to end. The greens, yellows and reds of "Mandy," and the purples, yellows, and hot pink of "Choreography." The vast studio set for the opening scenes, its monochromatic quality contrasted with the beautiful painted backdrop on the impromptu stage, and all the hotel and nightclub sets, are evocative of their setting and of the 1950s generally.

The performances play more intimate than in past home video editions: Bing breaking up watching Danny's flamboyant semi-drag act, Bing's richly blue eyes and, conversely, Vera-Ellen's alarming lack of body fat. Her legs are pure muscle, her waist impossibly small and her neck not much larger than a construction worker's wrist. Reportedly anorexic at the time, she doesn't exactly look ill, but she makes quite a contrast next to big-boned (but beautiful) Rosemary Clooney.

The four leads are outstanding, offering a nice balance of strengths: exceptional singers (Crosby and Clooney), dancing (Vera-Ellen and Kaye), and comedy (Kaye and Crosby). Bob Fosse worked on the choreography, dancer Barrie Chase has a line or two ("Mutual, I'm sure!") and a very young George Chakiris makes an eye-grabbing if unbilled appearance dancing around Clooney during "Love, You Didn't Do Right By Me."

Casual readers are advised to look at my comments about the transfer above. Adding to that, the title elements don't hint at the glorious-looking film to follow, and the first 10 minutes or so have their share of rough process shots, particularly dissolves, a transitional device director Michael Curtiz loves. For some reason, after about the 10-minute mark, even the dissolves become almost imperceptible, and overall this transfer is basically unsurpassed.

VistaVision movies were generally released with Perspecta Stereophonic Sound only. This release offers a restored mono track and a 5.1 DTS-HD Master Audio version, but there's very little in the way of discrete audio. Mono tracks in French, Spanish, and Portuguese are included, along with subtitles in all four languages.

Supplements include several carryovers from previous home video versions: an audio commentary by Rosemary Clooney, who also appears in "White Christmas: A Look Back." Two trailers, one a reissue, have been bumped up to high-def.

There is little doubt fans of classic Hollywood films will be rushing to buy White Christmas but I hope high-def technophiles and Blu-ray collectors who think The Breakfast Club a "classic" will watch at least a few minutes of this, drawn to its incredibly beautiful transfer while getting sucked into its seductive holiday spirit. One of the year's best releases and a DVD Talk Collector Series title.

*Wikipedia lists several Japanese films as being shot in VistaVision: Vengeance Is Mine, In the Realm of the Senses, etc., but this is incorrect. In Japan 1.85:1 widescreen is advertised as "VistaVision size," referring to the screen shape, not the negative format.