By the way...I've left hidden clues throughout this review, telling the savvy reader out there exactly how I really feel about this documentary. Shhhhhhhh.....here's the first one. Just play it backwards: sknits ti.

Jesus, I hate documentaries like this one. I mean...they really hit me where I live. Of course it's all utterly mad. Anyone can see it's been faked. The scenario doesn't even make any sense. I know that (judging by some of the hilarious comments below, it seems a few, um...challenged Facebook readers skipped these opening sentences...). But conspiracy theories are like kryptonite to me, so.... Highway 61 Entertainment has released Paul McCartney Really Is Dead: The Last Testament of George Harrison, an unintentionally hilarious rehash of all those old "Paul is dead" clues and theories that bedeviled The Beatles singer back in the late 60s. Nothing here is believable, from the structuring device that consists (supposedly) of George Harrison's secret tape confessions about the fraud, to the central hoax theory itself. Fans of The Beatles will be appalled (or do I mean, "A Paul'ed" which is yet another clue indicating that John and George were being harassed by MI 5, and so they...oh, forget it), while conspiracy theorists will no doubt chortle with glee. A strange Bob Dylan extra is included--to no avail.

Here's the theory in a nutshell, for the uninitiated. On a rainy evening on November 9th, 1966, Paul McCartney had a violent argument with John Lennon and stormed out of the recording session for their latest album, Rubber Soul, and sped off into the night in his white convertible. Picking up a beautiful hitchhiker who identified herself as "Rita," McCartney lost control of the vehicle when the girl, in a fan-frenzy state of excitement, realized exactly who had picked her up. Fighting off the crazed fan (whom later, we're told here, turns out to be...Heather Mills), Paul smashed his convertible into a lorry, where he was decapitated, his head gruesomely disfigured. All three of The Beatles were brought to the crash scene, where they were forced to identify the body, devastating them in the process. Later that morning, an MI 5 agent known only to them as "Maxwell," offered a solution to John Lennon when he expressed a wish to continue on with the band: the government espionage agency would provide their best plastic surgeons to transform the unofficial winner of a Teen Beat magazine/American Bandstand "Paul McCartney Look-a-Like Contest winner, "William Campbell," into a new "Paul McCartney." 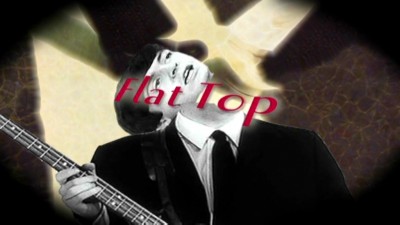 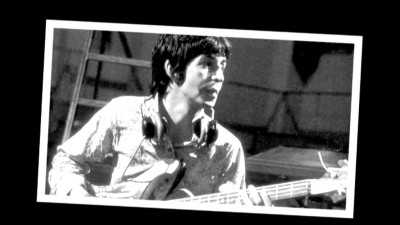 This hoax would, MI 5 asserted, stave off any mass suicides of young girls all over the world should they find out that Paul had died in a car crash. Now secretly known as "Faul" by John Lennon ("False Paul"), the imposter has to undergo a series of plastic surgeries to fool the public (all supposedly documented on The Beatles album covers, if you look closely enough, where False Paul has scars and beards and odd-looking poses), while John goes through his backlog of songs already composed with Dead Paul. Feeling guilty, however, about the subterfuge, John tells George he will leave clues throughout subsequent Beatles album covers and songs, providing an alibi of sorts for the band, should the truth ever surface about what was perpetrated on their adoring public. Finally fed up with the lies, John tells George he's going to sing about the hoax (as in, "spill his guts"), but winds up dead 8 days later--a warning to the rest of The Beatles from MI 5 that squealers will get it in the head every time. Eventually George Harrison, suspicious that his recent attacker was sent by MI 5 (Harrison was stabbed and almost killed in his mansion), records a confession of the ruse, and sends it to the Highway 61 Entertainment offices. 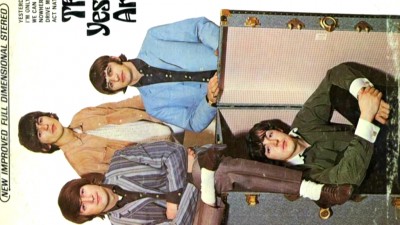 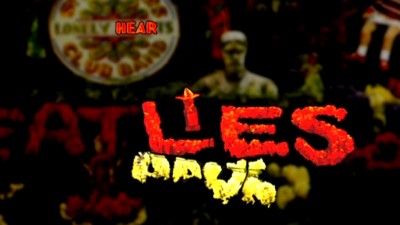 Paul McCartney did not die in a car crash in 1966, only to be replaced by a plastic surgery double...a double who miraculously seems to have caught on playing the singer/composer quite well, launching a successful solo career long after he quit The Beatles and after John Lennon supposedly quit supplying him with songs. The notion is utter lunacy. While the purported hidden "clues" to Paul's death on the album covers and in the songs, repeated over and over again for the last 40 years now by new generations of head cases, are delightfully screwy and inventive, they hold zero weight with anything approaching rigorous investigation. Not one element of the conspiracy theory holds up to factual scrutiny, and quite clearly and most obvious of all, McCartney is still around as living proof of the absurdity of the hoax. 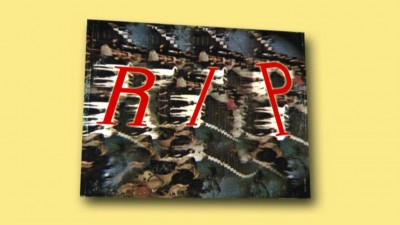 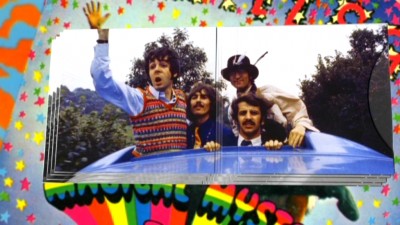 That being settled (take that, you conspiracy nuts), let's look very briefly at this purported "documentary" that presents "new evidence" to suggest that Paul indeed did die back in 1966. Directed by a man named Joe Gilbert, who introduces the film and clues us in on the strange package that arrived at his office in 2005, containing George Harrison's tape-recorded confession of the con, Paul McCartney Really Is Dead: The Last Testament of George Harrison makes about as much sense as the stupid "Faul" theory itself. First off, setting aside for a moment the validity of the claim that it is indeed George Harrison speaking on the tape, let's discuss the audio I hear on the documentary's soundtrack. Is that supposed to be the actual recording sent to the offices of Highway 61 Entertainment, or has it been transcribed and performed by an actor? If Gilbert wants me to believe those are the actual tape transmissions, a couple of problems immediately come up. First, it doesn't sound like George Harrison, particularly when the accent goes in an out on words like "apartment," "loved," "gods," and many others that I would assume Harrison had mastered in his own accent. As delivered to us on the soundtrack, the tape narration sounds far too actorly and staged (and young) for what would be a shaky self-confession of an older man. Who dictates their memoirs in this fashion, full of convenient dramatic pauses and emphases just as a voice actor might do? And for a crappy microcassette recorder, that audio is sparklingly clear...almost as if it was recorded in a studio, since there doesn't seem to be any of that pesky ambient noise associated with such a on-the-fly recording. 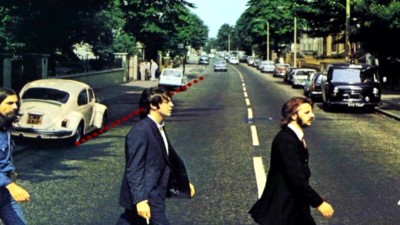 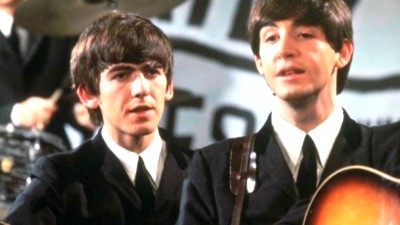 If it is supposed to be Harrison, technical and presentational questions aside, why would Harrison send this pop culture bombshell to these guys at Highway 61 Entertainment? Why not send it to one of his British newspapers, like The Times, or The Telegraph or The Daily Mail? Why not send it to the BBC, or Rupert Murdoch? Why not send it to The New York Times or The Washington Post...that is if they haven't already had their quota of made-up stories for the week? Or how about their shady equivalent: the Big Three newscasts? Why not send it to Entertainment Tonight? Or Access Hollywood? Or Oprah? Or Judge Judy? Maury? Hell, my local Farm Report gets more coverage than Highway 61 Entertainment. And on a lighter, but equally nonsensical note, why does he send the recorder along, too? Wouldn't he just send the two little tapes (when I saw all those stamps on the envelope, I hit the floor). If it was Harrison on the tapes, why would he conveniently spend so much time talking about the history of The Beatles...as if he was padding out a crappy little documentary? Wouldn't he assume his anonymous listener would already know all that stuff? And what does any of that have to do with Paul being dead? How is all that background germane to the confession? He has time for that? Apparently, he doesn't have time to check his facts--facts you would think he'd know--such as the Rubber Soul album, which the doc spends a lot of time on, discussing all the clues contained within the songs and the cover art as proof positive that Paul had been replaced, was recorded prior to the covered-up November 9th, 1966 death date of Paul. Or that Heather Mills, whom you'll remember was "Rita," the crazed fan that killed Paul by freaking out in his car, wasn't born yet in 1966? Do I need to expose any more of these factual errors? Nope. Five minutes on the internet should do it for anyone interested in completely debunking Paul McCartney Really Is Dead: The Last Testament of George Harrison. 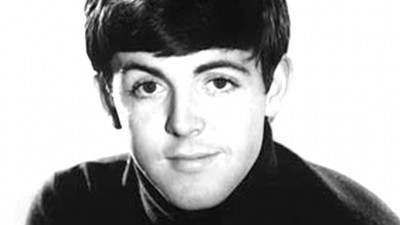 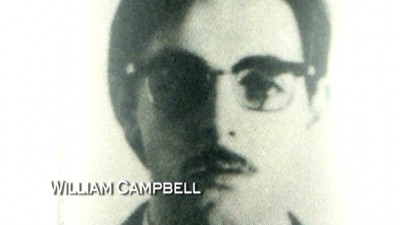 The Video:
The anamorphically enhanced, 1.78:1 transfer for Paul McCartney Really Is Dead: The Last Testament of George Harrison looks okay, with the archival footage suffering from dupe noise and reframing. Otherwise, the new re-creations look sharp and slightly dark.

The Audio:
The Dolby Digital English 2.0 stereo audio track doesn't feature any Beatles music (big surprise), but its recording level is generous. No subtitles or close-captions.

The Extras:
A ten-minut extra, Bob Dylan Meets The Beatles has absolutely nothing to do with the subject at hand...and thus it's ten times more credible than the main feature. Interesting account of The Beatles and Dylan getting high...if you're into that.

Final Thoughts:
I mean...it's so f*cking stupid. I thought this nonsense died out around the time my older brothers finally sobered up and quit staring at their Beatles albums all day long. I can't imagine what Beatles anniversary or product tie-in is coming up to prompt the creation and release of Paul McCartney Really Is Dead: The Last Testament of George Harrison, but there has to be some reason for this rehash of the stale, old "Paul is dead" conspiracy theory. For Beatles fans, I'm recommending the title (for laughs, if anything else). Still, as silly as all this is...these conspiracy nut-job docs do hold a special fascination for me (like the guy on my bus who talks to his bologna sandwich), and Paul McCartney Really Is Dead: The Last Testament of George Harrison may suit a similar fan of the genre when he's looking for a hasty 3:00am rental (I write "he" because women are way too smart for this garbage).