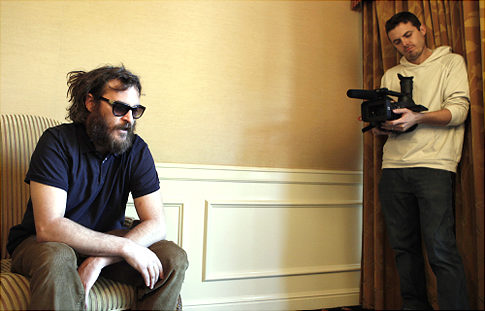 Joaquin Phoenix's and Casey Affleck's
"film" I'm Still Here has one mildly amusing inside
joke in it, and that is its title, and that particular play on words
will only be meaningful to those who saw Todd Haynes' daring and difficult
cinematic treatment of the life and personae of Bob Dylan, I'm
Not There. That the joke isn't even all that funny even
to those who've seen the Haynes film is only the tip of the iceberg.

I'm Still Here is an offensive, suffocatingly smug and self-satisfied
piece of faux-introversion that gifts those patient enough to sit through
its entirety with the kind of obscene lack of thought one might associate
with frat house gang rape - which isn't unrelated to the way one
feels after watching it. Phoenix and Affleck are both talented
actors who I generally enjoy watching on-screen. Here, they have
fallen victim to the single most common mistake made by actors who unwisely
reach beyond their given talents: they believed that they knew something
about how to tell a story. I'm Still Here proves a whole
slew of negative stereotypes about actors, and may very well occasion
a renewed interest in dismissing them as a group of infantile chauvinists
who relish their own creative byproducts the way pigs relish bathing
in their own shit.

A couple of years ago, Joaquin Phoenix,
working with co-writer, co-producer, and director Casey Affleck, staged
a surprisingly elaborate hoax in which he claimed to be re-inventing
himself as a hip-hop artist. Physically, he underwent a transformation
that found him looking quite unlike any previously known rapper: a paunchy
Phoenix let his hair go and grew a bushy, unruly beard. The hoax
never really got beyond the "what's this about Joaquin Phoenix becoming
a rapper?" stage, and neither does the film, which documents the hoax
with a straight face, pretending that this artistic transformation is
really happening.

Only a duo with the combined Hollywood
credentials of Phoenix and Affleck could have roped "guest stars"
such as Sean "P-Diddy" Combs and David Letterman into the proceedings,
which helps invest the film with the weight of legitimacy. A prologue
featuring purported archival footage of Phoenix performing with his
siblings as a child, and the vérité shooting style, also help
generate a sense that Something Interesting must be happening here.
However, a baffling and pointless interest in showing male genitalia
and some raunchy "crazy musician" behavior thrown in for good measure
merely remind us that this is amateur hour at its worst.

But alas, that isn't the worst
thing about I'm Still Here. The worst thing about it
is its total lack of purpose. If this is all just a big joke,
as we now know it to be, whither the hoax? What does it reveal
or perpetrate that is in any way significant or meaningful? Is
there a satirical angle here? I don't believe there is.
Maybe the point was that Joaquin Phoenix got the most press of his life
for simply acting like an asshole. That's kind of funny, but
it doesn't merit making me watch a film that highlights the exhibition
of his jiggly midsection and several penises flopping haphazardly about.
I don't believe there is anything to "get" in I'm Still Here,
because all it is is a couple of distracted fooles playing around with
equipment they haven't the slightest interest in using appropriately.
If filmmaking were masturbation, Phoenix and Affleck would win the Oscar for Best Circle Jerk.

Magnolia's enhanced 1.78:1 image looks good, but not outstanding,
probably due to the way the film was shot: on video, in less-than-optimum
lighting conditions. Still, everything looks fairly solid, with
relatively minor compression artifacts given the circumstances.
The 5.1 surround soundtrack is spotty. Scenes are often either
poorly miked, or meant to sound as though they are.
Some such scenes are subtitled, while others are not. Phoenix
wants to be Brando, apparently (and is actually called "the Brando
of his generation" by Time Out New York on the back of the
DVD case!), so he mumbles frequently, which contributes to the film's
imperfect sonic presentation.

There is a pair of audio commentaries, which are highly redundant.
The first features Casey Affleck, along with Phoenix and several other
cast and crew members. It's pretty formless, one-note, and self-serving.
The second commentary features Affleck solo and is much more convincing
in terms of Affleck demonstrating an engagement with the material that
goes somewhat beyond what I might have expected, based on the final
product. A lengthy set of Deleted Scenes (62:38) is playable
with or without commentary by Affleck. Alternate Ending Outtakes

(6:45) are also available with or without commentary. There are
two Audio Conversations featuring Affleck and Phoenix, one with
Jerry Penacoli of the television program Extra, and one with
journalism professor and film writer Christine Spines. These conversations
reflect on the film in hindsight, and on the controversy and press coverage
surrounding the hoax. There's also an after-the-fact video
Jerry Penacoli Interview with Joaquin Phoenix (6:11).

I'm Still Here is a vacuous
film that showcases the unique form of provinciality that results from
spending too much time in the world of entertainment. The film

is about the dark side of talent, but not in the way that was intended.
Skip it.