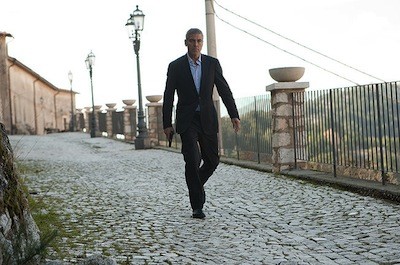 Being an old spy can be tough. Never mind what it took to get there, yours is not a profession with a good retirement plan. I just imagine that the amount of enemies you've gathered over the years is directly proportional to how much slower age has made you.

In his new movie, The American, George Clooney plays Jack, a gray-bearded, sallow-eyed espionage hound dog. At the start of the movie, Jack is in a snowy Swedish hideaway with his lover and little else, a fair distance from civilization. Only unknown assailants have arrived, and they have come armed. Paradise lost. (Imagine this as a sequel to Michael Clayton, we get to see where the battered cleaner took that taxi.)

Jack runs from Sweden to Rome and there contacts an old hook-up. Pavel (Johan Leysen) gives Jack a place to hide, and then he gives him an assignment assembling a made-to-order rifle for a hitwoman named Mathilde (Thekla Reuten). Though Jack is holing up in a sleepy mountain town away from the city, he is not so far he can't drive to a cathouse, where he is named Edward and his regular prostitute is Clara (Violante Placido). Clara falls for Edward, he maybe falls for her, but Mathilde also flirts with him a little. The town's priest also takes an interest in Jack. And some bad guys show up. Maybe the Swedes, maybe someone else. Jack trusts no one. 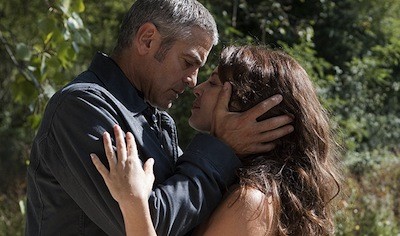 The American is based on a novel by Martin Booth. The screenplay is by Rowan Joffe (28 Weeks Later), and the director is Anton Corbijn. Best known as a rock 'n' roll photographer and music video director, Corbijn moved into full-length motion pictures a couple of years ago via Control, a biopic of doomed Joy Division-singer Ian Curtis. It was a chilled movie, contemplative, but also charged with music--not much of a shock, given Corbijn's background. Thus, it's all the more surprising that The American is such a quiet affair. There is very little music at all, and not even much dialogue. Clooney listens more than he speaks. The plot is almost entirely insubstantial, as well. It is formless. Jack bides his time in the mountains, his methodical work habits driving the movie. Surprises come as quick, dangerous bursts. Passions are always in check.

Corbijn maintains a steady eye for all of this. He is content to watch, to hang back, and let the story play out as it needs to. His sense of composition is regularly remarkable, and he's not afraid to marginalize his actor in a scene in order to show us how tiny the man is within it. Clooney is slumped, bundled up, and contained. He often appears as if he is trying to turn so deep into himself, he'll implode. He is at times monastic, at other times needy. He lies to himself about why he needs Clara (to get pleasure, not to give, nothing more) in the same way he lies to the priest about not being good with machines. Any new information gathered is a new secret to hold.

The priest also talks to Jack about past sins, and it's past sins that Jack fears will bring reprisal. It's not just about the Swedes catching up with him, it's what happened in the snow, and thus it's fitting that he fears these new women in his life might force him to answer for misdeeds. In all other aspects, the spy game we see here is a man's sport, but as we know, these kinds of men always perpetrate the worst fouls against their women. Corbijn and Joffe do a good job keeping the audience guessing. The paranoia runs so deep, you will likely fear for Jack right up to the very last scene.

It's hard to say what the bulk of the moviegoing audience is going to make of The American. The print ads sell it as a stylish 1970s thriller, while the TV commercials give us lots of George Clooney running with a gun. Many going to see The American won't be expecting it to be about an old spook in desperate need of a nap--and they may end up taking a nap themselves. Which would be too bad, because they'd miss out on something that is beautiful and haunting. The American is a brittle, fragile film, one that maintains a steady pace that's several laps behind what most people would expect from an action-suspense picture, but that will heap many rewards on those patient enough to wait for it to cross the finish line. Yes, it's true, slow and steady wins the race. I wouldn't say The American exactly builds to a crescendo, but its finale is effectively more brutal and heartbreaking for the care taken along the way. 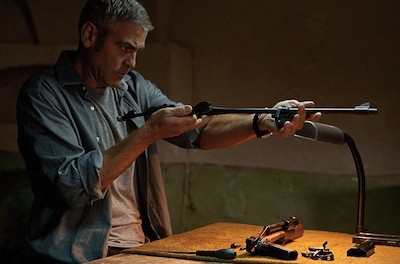