None but the Lonely Heart


"I invent inventions...I happen to be working on my greatest invention at the present time: a human animal which don't look for a master." - Ernie Mott, as played by Cary Grant

"People are what they are and love what they love, and I don't see any sense in trying to be something else." - Aggie Hunter, as played by Jane Wyatt 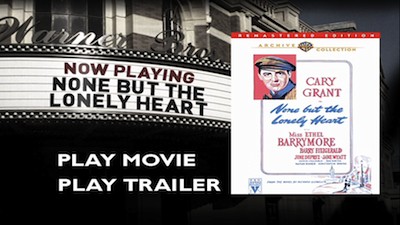 Cary Grant gives one of his edgiest performances in celebrated playwright Clifford Odets' 1944 adaptation of Richard Llewellyn's None but the Lonely Heart. Set in the years leading up to World War II, the downhearted drama serves as a symbolic reminder of the tough, aimless times prior to the conflict. Grant's character, Ernie Mott, is a layabout, shirking work and family duty, juggling multiple women, never sitting still for long. His only constant is his dog, Nipper. Ernie is prepared to leave his London neighborhood once and for all when a family friend (Konstantin Shayne) "plants a flea" in his ear. Ernie's mother (Ethel Barrymore) is terminally ill, and if Ernie wanted to be a good boy for once in his life, he'd stick around and help her run her second-hand shop.

Which is exactly what Ernie does. He turns himself around and settles in. He and his mom get on like never before, and the loverboy focuses his attention on the pretty blonde from the game parlor. Problem #1, though, is that Ada (June Duprez) was at one time a gangster's moll, and that gangster wants her back. Problem #2, Jim Mordinoy (George Coulouris) also has his eye on Ernie, impressed by his dead aim in the shooting gallery. Ernie actually has plenty of skills. He can fix clocks and tune pianos, and he has perfect pitch. Strike a note, and he can tell you what it is. The only thing Ernie is out of tune with is life itself. When the hardships pile on, both he and his mother are tempted by the criminal element. Ernie climbs in Mordinoy's pocket.

None but the Lonely Heart is a grim yet endearing melodrama, a little slow at times and also a tad bit predictable, but possessed of an earnestness that generally makes up for its failings. Cary Grant's bristled turn as Ernie was said to be one of the actor's favorite performances, and it definitely shows off his range. His is a restless soul, and Grant plays Ernie as if he is never comfortable. Even when he is stopped, he looks like he is in mid-step. He's also angry, and the actor's hard stare may surprise those who are only used to his easygoing smile. Don't worry, that smile does show up. The charming Cary Grant is here, too. In particular, the scenes he shares with Ethel Barrymore are full of humor and warmth. Though they are fighting at the start of the picture, once Ernie decides to stick around, they get on smashingly. Grant makes the jokes between them sound off the cuff, and the laughter they share plays as genuine.

Odets and director of photography George Barnes (Spellbound) create a convincing version of the poorer sections of London. They work with the bricks and the grime to establish a sad, oppressive environment, one that is offset by the carry-on demeanor of those that live there. For all the sad characters, there are also several that are upbeat and practical, including a kindly doctor (Barry Fitzgerald) who is always ready with free advice and a sweet musician (Jane Wyatt) ready to accept Ernie for what he is, even if that means he's always chasing something else.

It's all pretty good stuff, and None but the Lonely Heart is a smartly made drama. Perhaps too smart. Odets would have been well-served by turning up the boil a little. At times, he intellectualizes too much and keeps the inherent emotion of the scenario at arm's length. It works in the sense that the movie is a wartime effort that doesn't force rah-rah politics, but that leftover passion could have been put into the love story. Odets also could have done with some tighter editing. Some scenes meander, characters take too long to react. None but the Lonely Heart is chubby at 113 minutes and had there been more editing at the script stage, and then again at the cutting stage, it could have been a classic.

Still, it's very much worth it to see the fine performances by Grant and Barrymore, and though the film falters, it does maintain its sincerity. The ending doesn't cop out and go for the easy happy ending; instead, it stays true to the story's existential underpinnings, discarding the predictability of some of the other story points in favor of an emotionally satisfying finish. 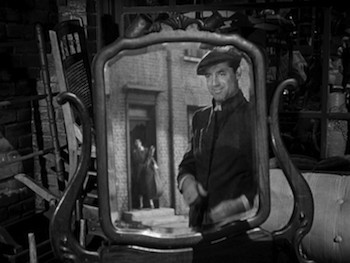 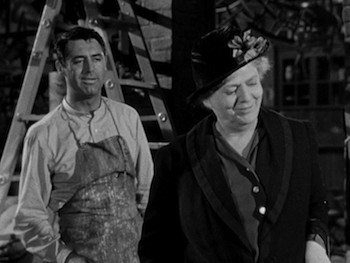 Video:
None but the Lonely Heart has been released as part of the Warner Archive manufacture-on-demand initiative. It's been a couple of months since I last reviewed one of these discs, and though it's still a blue-backed DVD, the overall packaging is much better. Gone is the standard cut-and-paste covers, replaced by reproductions of the vintage posters. The menu also has a bit more design punch to it.

The print for None but the Lonely is decent. Folks expecting a full restoration should probably go elsewhere, as the Warner Archives editions aren't as fine-tuned as their more regular releases. That said, None but the Lonely Heart was struck from solid source material. The resolution is soft at times, and there are also occasional scratches and noise--including a distractingly poor shift in quality in the film's very final shots--but overall, it's a slightly better than average disc.

Sound:
The mono soundtrack is fairly good. No big effects, obviously, but strong tones and no extraneous noise. There are no subtitles or captioning.

Extras:
The only extra is a worn-out theatrical trailer.

FINAL THOUGHTS:
Though None but the Lonely Heart was apparently one of Cary Grant's favorites from his own oeuvre, it's not a film you hear about all that much. It could be because this wartime drama is somewhat of a downer, but if such things don't bother you and you want to see Grant play a ne'er-do-well trying to get his act together in the face of hardship, then it's worth seeking out. He earned an Academy Award nomination for his turn as Ernie Mott, and Ethel Barrymore won the Oscar for playing his mother. The movie is overlong and maybe a little too reserved, but overall, it's a solid effort from Clifford Odets. The depiction of poverty and the tough choices faced by the working class is not overly polished to appease Hollywood, and the script gets tough when it has to. Recommended. 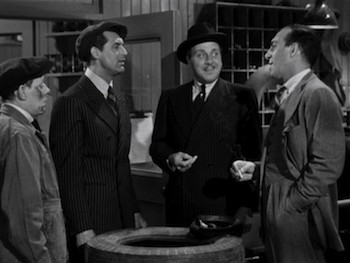 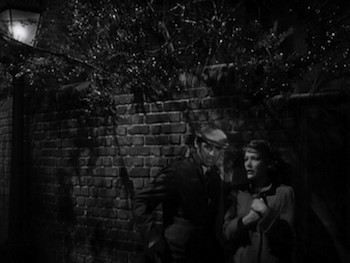