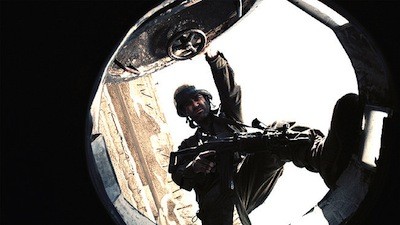 In 1982, Israel invaded Lebanon, engaging in a bloody war with the PLO and Syrian Muslims as part of the ongoing conflict regarding Palestine and other land rights issues. I remember hearing about the Lebanon War when I was a kid, it seemed like it was always on the news and went on forever. I never really understood what it was about, a problem shared by some of the tank crew in the recent movie about an operation in the early days of the war, simply titled Lebanon.

Written and directed by Samuel Maoz, Lebanon takes place over 24 hours as a small unit of paratroopers pushes through a bombed-out city searching for enemy hold-outs. These Israeli forces are led by Jamil (Zohar Shtrauss), a hard case who has seen combat and come out the other side with his head together. They are backed by an inexperienced tank unit. So inexperienced, in fact, it's the first day on the job for their gunner, Shmulik (Yoav Donat). When it comes time to pull the trigger the first time, Shmulik can't do it, and he gets a man killed.

The rest of the team is only slightly more seasoned. When the tank's driver, Yigal (Michael Moshonov), first meets Jamil, he asks the senior officer to call his mother and tell her he's okay. The tank commander Assi (Itay Tiran) is mostly indecisive, and his men elect not to follow the bulk of his orders. The most "with it" is the ammunition loader, Hertzel (Oshri Cohen). Hertzel is a short-timer with a big mouth and a good sense of self-preservation. As the maneuver starts to nosedive, it's Hertzel that questions what is going on. The platoon has ended up in the center of a hotbed of Syrian forces--only they didn't even know they were fighting Syrians. Cohen is excellent as Hertzel, finding nuances in the character that allow him to take his portrayal beyond the cliché "smart mouth" function. Donat is also fantastic as the gunner, and he makes the most of a show-stopping monologue during a brief lull in the action. 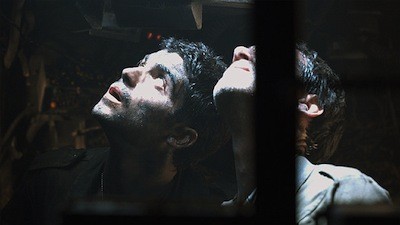 In terms of characters, this is a pretty conventional set-up. The difference between Lebanon and other war pictures, however, is that Maoz chooses to stage the entire movie inside the tank. Once Shmulik climbs inside, none of the men ever climb back out. Jamil comes and goes as he pleases, and the vehicle takes on a few other guests, but our only window on what is happening beyond the stuffy confines is Shmulik's target site. He watches the death and destruction and all the human tragedy they entail centered in his cross-hairs. Sometimes he sees things he doesn't want to, sometimes things he shouldn't, and sometimes it's like people are gazing right back at him. In particular, a civilian who has lost her entire family practically stares him dead in the eyes, though there is no way she can know the scope is a direct line to the man with his finger on the firing pin.

This confined environment is a perfect metaphor for the limited resources and knowledge of the typical soldier on any frontline. Things are happening that are beyond their control, they are only privy to the things they can see and overhear. Making matters worse, the twisted history of conflicts in the region makes the motivations for battle difficult to decipher. In a way, it is a conflict of language as much as it is one with bombs and bullets. Christian Arabs, known as Phalangists, who join their ranks don't speak Hebrew, the Israelis don't speak Arabic, and so they all communicate in English, while a Syrian prisoner doesn't even have that option. Even the soldiers who speak the same language are always demanding their comrades clarify. Euphemism is a big deal. Code words extend beyond secrecy and now sugarcoat the truth. Illegal phosphorescent bombs are called "flaming smoke bombs," and corpses are termed "angels." Even the tank has its own name: Rhino. It bears a slogan, "Man is steel. This tank is only iron."

Beyond the politics, Lebanon is a tensely rendered piece of cinema. Maoz uses the limits of his environment to make the audience feel as caged as his subjects. As the movie progresses, the tank grows more damaged. It has a filthy layer of water on the floor, and oil and grease drips from every seam. The men also get more disgusting in direct relation to how badly frayed their nerves are becoming. It's hard to keep moving forward when there is no sense of direction. It's claustrophobic in their death dealer, and it's turning into a death trap.

Lebanon eventually builds to a gut-wrenching, ass-clenching conclusion where the chaos completely takes over. It grabs you, and then releases, finally pausing for a moment of reflection. I am not sure there is much greater meaning here than "War is Hell," but it's a lesson that always bears repeating--and when the delivery is as well done as this, it's never redundant. 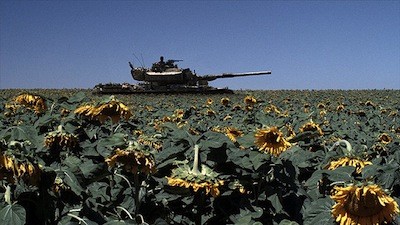