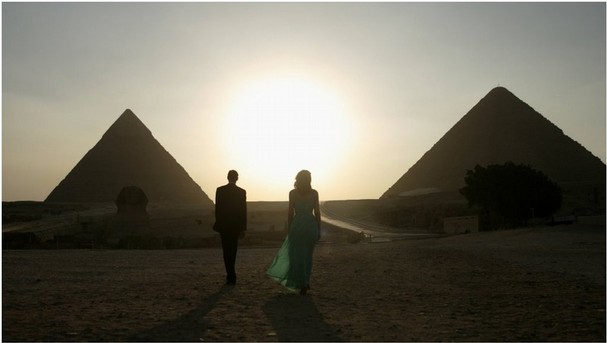 Cairo Time is a thoughtful, understated, well-photographed character piece anchored by a good performance by an appealing actress. In the lead, Patricia Clarkson gives a quiet, lovely performance, as is her tendency. Writer-director Ruba Nadda's script is sensitive and subtly searching, and her direction is elegant without being slick. As a character piece, it requires, more than the average genre picture, that we feel that we know something about the protagonist. At first, it seems as though Nadda is perhaps a touch too aloof in her approach to Clarkson's character. But Cairo Time admirably constructs its two lead characters over time, rather than rushing to etch them too firmly at the outset.

Clarkson plays Juliette, a magazine editor who arrives in Cairo looking to reconnect with her husband, a UN staffer who is delayed in Israel due to fighting in Gaza. She ends up whiling away the days waiting for him in the city, often in the company of her husband's friend, Tareq (Alexander Siddig). Tareq is a gentlemanly bachelor who remains tactfully aloof during their outings, despite his obvious attraction to her - and to her foreign-ness.

Cairo Time has something in common with David Lean's Summertime from 1954, but it's tone is different, and it's charged with the concerns and politics of our own time. Nadda invests Juliette with a fairly naive grasp of recent global events and cultural tensions; this is clever work, as it forces viewers to test their own assumptions against Juliette's naiveté and weigh whether or not we are too prejudiced. Still, the film has a light touch in this area, never even approaching the brow-beating we commonly receive from movies that wish to prove a point. That light touch is assisted by the gorgeous photography, which is fluid and expressive without being too romantic or fussy. There's no use of soft-focus here. This isn't Eay Pray Love by any means. Cairo Time is shot with confident simple beauty that reflects a classic sensibility in terms of photographing a story.

Juliette is an observer, and there's a Jim Jarmusch quality to her ramblings and wanderings, her exposure to a new way of life, and her quiet growth throughout the course of the story. Clarkson is the Blossom Dearie of actresses. She's blonde, petite, and quiet. Everything she does is deeply felt but gently communicated. She has good taste and poise, and an old-fashioned grace. Here, Clarkson suggests tastefully masked reservoirs of emotion that she and Nadda only hint at during carefully timed moments. For all that, Cairo Time never feels contrived or overworked. The film suggests the hard work that went into it only inasmuch as it all comes off so well. Siddig is also very good, portraying a man similar to Juliette in his sense of dignity and allegiance to good taste and principled behavior. He is a charming, modest old soul who prefers his own concept of rectitude over life's many temptations.

Bonus Content
There is a full-length Commentary Track with writer-director Ruba Nadda and Luc Montpellier. It's a good, production-oriented track that covers a lot of ground. Both participants are down-to-earth and engaging. There is a single Deleted Scene (3:16) that extends the film's denouement. There is a short making-of Featurette (7:15) that includes interesting commentary from Nadda. A Toronto Q&A (25:57) includes participation from Nadda, Siddig, and Clarkson. Finally, there is a group of four earlier Short Films by Nadda, all of them well worth a look.

Nadda's careful work in Cairo Time places her among a growing crop of major female filmmakers, but what is most significant about this film is that it is thoroughly thought through on every level. It is an accomplished character study that bears the best kind of understated technical polish and two outstanding performances. Highly recommended.