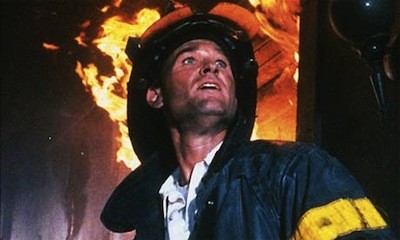 Every time a new Ron Howard movie comes out and I decide, in my infinite wisdom, to skip it (that's right, no Dilemma for me), I chuckle to myself a little thinking back to a time when I thought Ron Howard was the future of cinema. As a naïve child of the 1980s, I saw his trio of hits--Night Shift, Splash, and Cocoon--as a signifier of, I don't know, the next Spielberg, maybe. I also thought Charlie Sheen was going to be the biggest actor of my generation, and you know, I wasn't exactly wrong. If you count Two and a Half Men's ubiquity into the equation, he kind of is.

And Ron Howard did turn out to be the future of cinema. That is, again, if you count big budget moneymaking pabulum into the equation. He has reigned at the box office pretty steadily, a lot like Spielberg, but with none of the wonder or occasional daring. Ron Howard is sort of a good example of everything wrong with mainstream movies of the last 20 years. You know, all the movies that have come out since Backdraft.

I swear to you, I didn't choose Backdraft out of the review pile with any motivation to advance that theory. I really just thought of that off the top of my head as I typed this; had it been a preconceived notion, I'd have skipped over Backdraft, I wouldn't have invested the time to try to prove what most people who would care about reading a review of this movie would never agree with anyway. Rather, I put my name down next to Backdraft out of curiosity. Could watching this 1991 firefighter movie remind me of what once excited me about Ron Howard movies? As I remembered it, this was my first real disappointment with him as a director (to this day, I have never seen Willow; I was in denial). Would looking back vindicate my childish ways, or maybe even vindicate Ron Howard in my mind?

As it turns out, it almost does both. I enjoyed a good 2/3 of Backdraft. The early part of the movie is an excellent example of how efficient and good Howard was at his craft, whereas the stinky final act is a reminder of how easily he gives in to the obvious choice--albeit, the one that will likely rake in the most bucks.

Backdraft is the story of two brothers, Stephen and Brian McCaffrey, played by Kurt Russell and William Baldwin. As children, the brothers idolized their father (also played by Russell), a Chicago fireman who died in the line of duty. Twenty years later, after dropping out of the firefighter's academy once and only going on to fail in various business ventures, Brian has returned to complete his training. His older sibling, who is nicknamed Bull, pulls some strings to have Brian assigned to the station where he is the field leader. His intention is to keep an eye on his little brother, but sibling rivalry rears its ugly head and the more judgmental side of Stephen's personality causes tension. This is probably a little of art imitating life for William Baldwin. I imagine this is what it was like at Thanksgiving in the Baldwin household when Alec discovered his less-talented relatives were following him into acting.

Anyway, the boys go out on jobs together, they fight fires, and they squabble. Amidst all of this, some mysterious fires around town are raising eyebrows. Three different conflagrations were started using a stealth technique. A small fire is set in the target location, and when some unsuspecting person opens the door to go inside, the sudden rush of air causes the flames to explode. Inspector Donald "Shadow" Rimgale (Robert De Niro) is trying to figure out how the arsonist is causing the fires and the connection between the crime scenes. Eventually, when things get too heated between the McCaffrey boys, Brian takes an assignment working with Shadow to solve the mystery.

The script for Backdraft, written by Highlander-creator Gregory Widen, sets everything up really well. The day-to-day life of a fire crew and their off-duty personal problems provide a solid foundation to build a drama on. Kurt Russell is charming and roguish, and he and Scott Glenn, playing the older fireman who ended up raising the kids after their father's death, have the strong camaraderie that is essential to these kinds of men-doing-things-together stories. Russell also has a serviceable dramatic subplot involving his crumbling marriage (the wife is played by Rebecca De Mornay) that emphasizes the personal toll dangerous work takes on the families of those who choose to do it. The other romantic plot, involving Baldwin and his old girlfriend (an embarrassed-looking Jennifer Jason Leigh) is not as good, but that's because it's largely a plot device to get us to the third act.

The true star of Backdraft is the fire. Shot prior to the digital revolution (as Howard makes sure to remind us in an intro before the movie), all of Backdraft's special effects are done with real fire or some old-school technique. Given how elaborate some of these set-ups get--indeed, each scene tops the last, escalating to the giant warehouse scorcher that closes the movie--you'd have to be a real dope not to be impressed with what Howard's team pulls off. There isn't a single shot in the movie that looks faked. No bad green screen, no obvious optical illusions--the flames look real.

They are also presented as having a life of their own, and so the fire moves and even makes noise. The characters often anthropomorphize it and refer to fire as an animal, but really, it's more like a poltergeist. The fire team is practically performing an exorcism. One of the side characters, a serial arsonist played by Donald Sutherland, even serves as the great killer's Renfield, locked away and dreaming of being reunited with his precious master. (I initially thought Sutherland's character was meant to capitalize on Hannibal Lecter mania, but it turns out that Backdraft and Silence of the Lambs came out in the same year.)

For about 90 minutes, Backdraft is effortlessly entertaining. Sure, it's melodramatic and occasionally really cheesy (slow-motion montage with a hose!), but it all works. Had Gregory Widen and Ron Howard stayed the course, they could have ended up with a solid family drama. It wouldn't have to have been much different. Somehow the two brothers would find a common ground, Brian would redeem himself, and this would also effect how their love lives played out.

Instead, Backdraft takes a shift into suspense thriller territory. The movie stops being about the relationships and the job and starts being exclusively about Shadow and Brian on the hunt for the arsonist. This portion of the movie is clumsy and riddled with clichés. How it all gets solved is full of holes, including one character suddenly doing a behavioral 180 and Stephen realizing what is really going on at the same time as Brian despite not having any of the facts Brian has. Emotion is tossed aside for big action, and none of it is convincing. It's a case of the filmmakers eschewing everything that might have made their movie interesting for what will give their audience the big blockbuster finish they've deluded everyone into thinking they want.

Of course, the producers have 77-million reasons in support of their decision and making me look like a chump. Why go deep when the surface is so much more appealing? It has remained Ron Howard's modus operandi ever since. He takes engaging stories like A Beautiful Mind and Frost/Nixon and tenderizes and kneads the scripts until all the tough, lumpy bits are squished out. He's a flapjack flipper, not an artist, and boy, people sure do love flapjacks.

Video:
The Universal release of Backdraft on Blu-Ray is essentially the exact same release as their double-disc anniversary edition released on DVD in 2006 (and reviewed extensively by Paul Mavis, who liked the movie more than I did). Though digitally mastered for 1080p HD (widescreen 2.35:1), I wasn't sufficiently blown away by the picture quality to think the studio did all that much to prepare it for this new presentation. Which isn't to say that it looked bad. The colors are well-rendered and the blacks are deep and consistent. The fire in particular looks incredible, with all the nuance and detail running through the orange flames popping right off the screen. At the same time, there was some background shimmer in some scenes, as well as actual spots and blemishes on the image in others. This makes me think this is a movie you don't necessarily need to run out and upgrade to BD if you already have the two-disc release.

Sound:
The 5.1 English soundtrack is mastered in DTS-HD for Blu-Ray, and oh-em-gee, it sounds remarkable. The action pings between the speakers, getting good and rumbly and loud in the more frenzied sequences. Even better, the audio effects for the fire--the moans and growls--are tremendously effective when cycled through a good sound system.

The French dub is also mastered in 5.1, and there is a Spanish version in 2.0. All three languages have subtitle options.

Extras:
The 2006 Backdraft was a two-disc edition, with its extensive collection of special features given its own DVD. The Blu is only one disc, but the good news is, all the bonuses are ported over. These supplements are:

* Ron Howard's introduction.
* Deleted scenes (nearly 45 minutes worth).
* "Igniting the Story," your standard "evolution of a project" making-of.
* "Bringing Together the Team," covering the casting process, including working with real firefighters.
* "The Explosive Stunts" and "Creating the Villain: The Fire," both of which are pretty much self-explanatory.
* "Real-Life Firemen, Real-Life Stories," a short bit with a California firehouse testifying to the veracity of the film's depiction of the perils of their job.

The Backdraft Blu-Ray comes in the standard Blu casing with an outer slipcover. BD-Live features include the usual obnoxious Universal ads all over the menu. There is also a timeline and a picture-in-picture mode that, in lieu of a commentary, tosses up video tidbits from the bonus features while you're watching the movie.

FINAL THOUGHTS:
For as negative as I sound about Backdraft in the main body of my review, I still rate it a Recommended. For all its many faults in its last 45 minutes, it's still an entertaining popcorn movie with some truly cool special effects. I wasn't really bored watching it, just disappointed by its changing directions. The Blu-Ray package isn't necessarily a killer upgrade, though, so no real need to bump it up the queue if you already own the anniversary DVD from four years ago.