Synapse Films // Unrated // December 14, 2010
List Price: $29.95 [Buy now and save at Amazon]
Review by Stuart Galbraith IV | posted December 28, 2010 | E-mail the Author
Vampire Circus (1972) is the first Hammer horror film released to Blu-ray anywhere in the world.* It speaks well of Synapse Films, a boutique label dedicated to cult films like this, that they would scoop bigger labels with more exploitable Hammer titles, and with a fine high-def presentation and scads of good extras to boot. And yet it's, well - odd. Though it has many of the earmarks of the kind of horror films Britain and the European continent were churning out during the early-1970s, Vampire Circus is hardly the typical Hammer horror film.

At the time, the company was in a state of near-insolvency, Hammer having lost its long-term Hollywood studio backing, and Vampire Circus reflects their desperation to find the Next Big Thing while keeping new films - something, anything - in production. It avoids the been-there/done-that air of Hammer's Dracula series with Christopher Lee, as well as the fast burnout of their recent lesbian-themed vampire pictures, but different doesn't necessarily mean good. For hard-core Hammer enthusiasts (including this reviewer), Vampire Circus is interesting in its unusualness, but it's also extremely cheap with a muddled and, near the end, almost incoherent screenplay (reportedly the film was shut down before everything had been shot), a film populated by singularly uninteresting characters. If you've never seen a Hammer horror film before, this isn't a good place to start.

Synapse has concurrently licensed Twins of Evil and Hands of the Ripper, both 1971, and plans to eventually release those to Blu-ray as well. Hands of the Ripper has many of the same problems as Vampire Circus and overall is quite disappointing but Twins of Evil is one of the best latter-day Hammer films and features an excellent performance by actor Peter Cushing. All three were previously released to DVD in Britain under the Carlton label but this Blu-ray + DVD combo marks their U.S. debut in either format. 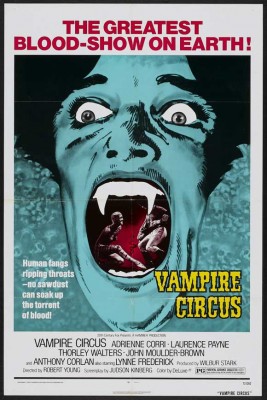 The film opens well, with a blood-and-thunder 12-minute prologue, rife with lurid sex and violence; it's not exactly subtle but it does grab the viewer's attention. After unfaithful wife Anna Müller (Domini Blythe) lures a young child into the domain of her lover, Count Mitterhaus (Robert Tayman, looking more like a '70s rock star) and he is revealed as a vampire, outraged villagers storm the castle. A gruesome battle ensues in which the count is staked through the heart and the castle eventually burned, but not before Anna drags the count's body deep into the castle crypt.

Fifteen years later the village is decimated by the plague, which some blame on the dying Count's curse upon the children of the three major families that led the siege against him. Plague notwithstanding, a traveling circus arrives and the locals are grateful for the distraction. (Insofar as the plague is highly infectious, this begs the question: Why would anyone even consider attending such a public, germ-spreading and potentially deadly attraction to begin with?)

Like the film itself, the circus is a cheap little affair, consisting mainly of a gypsy woman ringmaster (Adrienne Corri), dwarf clown (Skip Martin), strongman (Dave Prowse), and Emil (Anthony Higgins), a vampiric panther-man. Emil is soon also revealed as the count's cousin, and from the start it's clear the circus performers mean to exact revenge upon the village while bringing the long-dead count back to life.

As detailed in Synapse's excellent making-of featurette, except for a few familiar faces like Thorley Walters (as the burgomaster) and big Dave Prowse, Vampire Circus was made by and features actors who for the most part were Gothic horror neophytes (as opposed to Hammer regulars like writer-director Jimmy Sangster or producer Anthony Hinds). On one hand their inexperience adds a kind of naïve freshness; writer Tim Lucas argues the film reflects the influence of Bergman and Fellini but it's more like pastiche and barely that, considering. The sets and camerawork are cheap and unimaginative (the main circus set looks like something constructed for TV), but it undeniably has a strange if fitful psychedelic visual style that was different from the usual Hammer film. (Oddly, Lucas and the others never mention what was perhaps Vampire Circus's biggest influence, Ray Bradbury's Something Wicked This Way Comes.)

Vampire Circus attempts a lot of ideas it can't quite pull off - the Lewton-esque concept of Emil the panther man, for instance, who in jump-cuts changes from beast to man before his startled (but oddly under-impressed) audience. In other scenes acrobats transform into bats in mid-air, over the spectators' heads. All this obviously goes way beyond sleight-of-hand and into the realm of black magic but, as with the plague, the 18th century (?) villagers merely seem moderately entertained.

The film tries to be an exploitation exploration of forbidden fruit, the villagers (and their children) lured to the Dark Side, corrupted by the circus's alleged delights and thus spiritually doomed. And yet the film approaches a tasteless, disturbing subtext of pedophilia, particularly during the opening, where their despoiling of a young virginal child serves as an aphrodisiac for the vampire count and his illicit lover.

A symptom of the film's blandness is the lack of character names: Corri is simply the "gypsy woman," Prowse the "strong man," etc., while the villagers are colorless and interchangeable. The audience can hardly keep track of who's who and has no emotional investment even in the few that stand out a bit (Walters, Laurence Payne as Professor Mueller, future Mrs. Peter Sellers Lynne Frederick as his daughter). When Corri's gypsy woman is revealed to be a reincarnated (or something) Anna Mueller, which makes no sense (she's a mortal yet immortal?), this little plot twist has no impact at all.

The film marks time in annoying little ways. After the prologue, for instance, there's a long debate among the villagers about this existence (or not) of vampires. In as much as the audience has just unequivocally seen one in all its pointy-fanged glory, what's the point?

Filmed for 1.66:1 projection, Vampire Circus is a treat in high-def; the sharpness is boosted and an improvement over the earlier PAL DVD version, but the main attraction is the greatly improved color, now impressively rich with reds and violets and greens. The movie, originally distributed by Rank in Britain and by Fox in the U.S., is preceded here by ITV and MGM logos. The region "A" encoded disc offers 2.0 mono DTS-HD Master Audio (Dolby Digital 2.0 mono on the region 1 DVD) and sounds just fine. A music/effects track is also included.

Gallery of Grotesqueries: A Brief History of Circus Horrors whizzes through a hundred years of circus horror films sans clips, but director Griffith comes awfully close to making this work, again due to his fine use of high-def stills and poster art. Visiting the House of Hammer: Britain's Legendary Horror Magazine nostalgically profiles that interesting publication, which is then sampled with animated pages from its adaptation of Vampire Circus. A similarly animated still and poster gallery follows, along with a (U.K.) trailer, also in high-def.

Though not a particularly good movie, Vampire Circus is definitely of considerable interest to classic horror film buffs, and Synapse's respectful and inventive presentation and roster of supplements make this a very satisfying release. Highly Recommended.


* Yes, yes, I know about the region-free Blu-ray release of Hammer's Paranoiac (1963) in Great Britain, but most consider that a suspense-thriller, not a horror film.


** I was there when the Prowse interview was shot, though I had no idea it would be edited into this particular featurette. Ted Newsom arranged and conducted the interview, but when it became clear the 6'6" actor would never comfortably fit into Ted's compact, I drove Mr. Prowse to the interview in my car instead. Which is how I can boast to having given Darth Vader a ride in my Volvo.