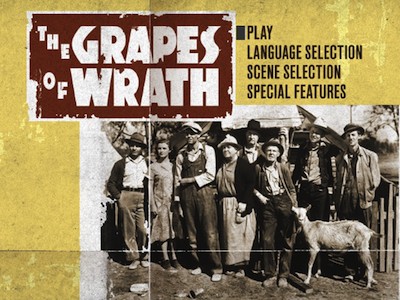 Before we get too far into this, no, this is not a new edition of John Ford's The Grapes of Wrath. The "Literary Classics Collection" version is exactly the same as the 2004 "Studio Classics" release, right down to the cover, spine number and all. What is different here is that they have shrinkwrapped the DVD with "a removable bookmark that incorporates artwork and a quote from the respective film," and even that is a misleading description. The bookmark in question is part of a larger postcard that, in reality, is a flyer for the other DVDs in this re-release initiative. It's not even perforated so you can remove the actual bookmark; it's really just an oversized ad. So, if you already own The Grapes of Wrath, this is not the upgrade you are looking for.

The Grapes of Wrath is one of those films that rightly deserves its ranking as a "classic." John Ford's 1940 adaptation of the controversial John Steinbeck novel is a crackling drama full of believable characters, effective sentiment, and the rarest of the rare, a soul. It's the kind of movie that Preston Sturges' fictional film director, John Lloyd Sullivan, wanted to make in the Hollywood satire Sullivan's Travels: "I want this picture to be a commentary on modern conditions. Stark realism. The problems that confront the average man!...I want this picture to be a document. I want to hold a mirror up to life. I want this to be a picture of dignity! A true canvas of the suffering of humanity!" Isn't that the surest sign of success, being the subject of parody within a year? That means elsewhere there were filmmakers trying to imitate Ford and his Okie success.

Henry Fonda starred in The Grapes of Wrath as Tom Joad, Steinbeck's flawed hero of the people. At the start of the picture, Tom is returning home to the Joad farm after serving four years of a seven-year sentence for manslaughter. He returns to the Dustbowl property to find his family and their neighbors gone. Corporations are moving in and evicting the sharecroppers who have worked the soil for decades, looking to maximize the land. With the Great Depression in full swing, new work is not easy to come by. When Tom finally finds his family, they are packing up and heading to California. They have seen a handbill that told them there are fruit-picking jobs there.

Of course, there were a lot of flyers sent out to advertise these positions, more than there are jobs to be had. This is a sad fact the Joads hear on the road out to Cali, though one they try not to believe. You hold on to any hope when you have to feed a family their size. There are seven Joad men, three women (one of them pregnant), and two children. Along their grueling trek, both grandparents pass away, and two of the other men break off from the group. Tom is also on parole and has to stay out of trouble. Thus, a tagalong, the former preacher Casy (John Carradine), takes some heat for Tom, and he is separated from the group, too. Casy's position as a man who doubts his faith means his eyes are wide open, and he will eventually open Tom's, too. After several employment scams wash the Joads into a work camp where the bosses are trying to muscle peach pickers into taking a lower wage and indebting themselves to the company store, Tom will have a new fire lit inside him. 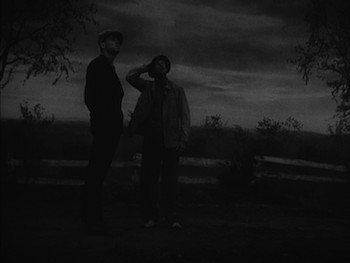 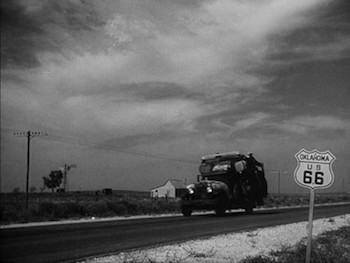 Ford's Grapes of Wrath is all the things Sullivan suggests a socially conscious motion picture should be. It is a document of modern conditions, and one that attempts to restore dignity to a displaced people. Ford wanted to show what it was like to be amongst the migrant poor, the sense of loss and the struggle to maintain hope. It's dirty and it's dusty, accommodations are basic and often falling apart, and young and old alike are starving. Ford and cinematographer Gregg Toland don't attempt to pretty it up, though "stark realism" isn't always the first order of business. There are gorgeous shots of Fonda walking against the night sky that are obviously studio paintings, but the effect is still astounding. Ford believed in the wonder of the American landscape, and so he delivers its full majesty to his audience even as he questions why so many have to suffer under those beautiful skies.

As an actor, Henry Fonda always possessed an unforced sincerity. As the everyman, he was always believable, and when he took a leadership position, such as when he played Ford's Young Mr. Lincoln or years later when he shook up the jury in 12 Angry Men, you could buy him as someone whose simple approach could inspire his fellow man to better themselves. This was years before whether or not you would have a beer with a candidate was considered criteria for choosing an elected official; I'm still one that contends our leaders are people I probably shouldn't want to have a beer with and certainly wouldn't want to spend time having one with me, but if Henry Fonda were still alive, I'd hope he'd want to get a whiskey with me. Which is a long way to go to say his portrayal of Tom Joad is one of his finest screen performances. He manages to get both the gruffness of the character and his quiet intelligence, meshing Tom's rough ways with his desire to learn with an uncanny perception.

Also amazing is Jane Darwell as Ma Joad. An old-time matriarch, Ma holds the family together, never giving in to cynicism, but yet remaining practical. She serves as Tom's conscience and also soothes his temper. Her work won her a much-deserved Best Supporting Actress Oscar. (Ford also won for directing.) Darwell and Fonda both have fairly famous speeches to deliver, and they maintain the power of Steinbeck's words (here filtered through a script by Nunnally Johnson) while finding the natural rhythm to make them vibrant without being preachy.

One can't help but watch The Grapes of Wrath in today's political climate and wonder how we've managed to come so far and yet still suffer from so many of the same problems as it depicts. Buzz phrases like "social justice" should make about as much sense to us as hearing about "Reds" makes to Tom Joad, and defenses of laissez-faire capitalism that favors the big corporations over the everyday citizen should strike us with the same kind of horror as we're likely to feel when we see tractors plowing the farmhouses of the Joads' Oklahoma neighbors. And next time the immigration debate paints migrant workers as greedy and lazy and far too desperate to take what is "ours," one would hope remembering how our own countrymen went through similar persecution could maybe inspire a little empathy. In an age where art is constantly being defanged and deeper meaning degraded, The Grapes of Wrath is all the more muscular.

I'm sure these statements aren't going to make me popular, and there will be charges that such things don't belong in a movie review. That would be to miss the point--not just of what I am saying, but of The Grapes of Wrath and other novels and films from our past that raise tribute to the enduring power of the American Spirit. The Joads were a family who pushed on, who embodied the realest America you are likely to find, and their story is told with the level of passion and insight that such a tale deserves. It's also a film that is so mindful of entertainment as its top priority, it's easy to forget that there is so much more going on with it. The Grapes of Wrath is one of the greatest achievements of American literature and American cinema both. More would do well to heed its call. 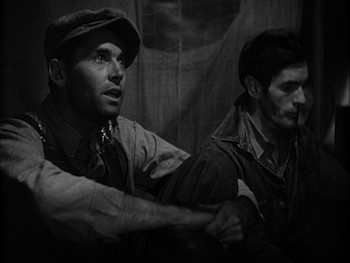 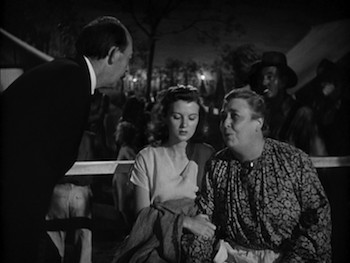 Video:
The full frame transfer of The Grapes of Wrath was top of the line in 2004, and it's still pretty good even now. There are some scenes where the blacks are maybe a little hazy or the overall image is a tad bit foggy, but the central image is crisp and the print free of any damage. I would, of course, like to see someone like Criterion get their hands on the film and see if they can top this DVD, but until such a day, you won't get much complaint from me.

DVD Savant also reviewed this disc on its initial release

Sound:
There is an English stereo track and one in mono. The stereo track sounds really good, without any excess noise or hiccups. There is also a Spanish dub and both English and Spanish subtitles.

Extras:
Fox released The Grapes of Wrath as a two-sided disc, with the movie on the A-side and most of the supplemental features on the B-side. All of the features from the 2004 release are intact on this "reissue," the only thing missing is the liner notes from inside the DVD case.

Side A on the disc has a commentary track featuring film historian Joseph McBride and Steinbeck-expert Susan Shillinglaw, as well as the option of watching the film with a short prologue made for overseas audiences who may not have been aware of the problems of Depression-era farmers in the Dustbowl. This is essentially a couple of extra title cards after the opening credits. 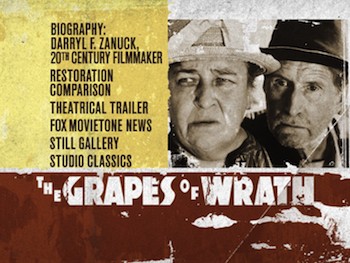 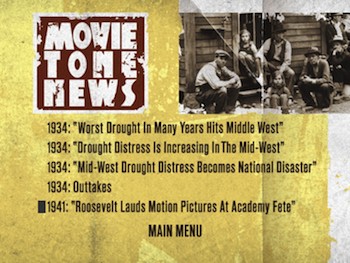 Side B has several archival pieces relating to the release of The Grapes of Wrath: a stills gallery, vintage newsreel outtakes showing footage of work camps, three 1934 newsreels about the drought in America's heartland, and a speech given by FDR praising Hollywood for tackling social issues.

The most substantial extra on the disc is an episode of A&E's excellent "Biography" series focusing on Daryl F. Zanuck, who produced The Grapes of Wrath.

There is also a restoration demonstration showing the clean-up job given to the film for this DVD. Lastly, there is a collection of trailers for other Fox Studio Classics on DVD.

FINAL THOUGHTS:
Naturally, for anyone who already owns Fox's DVD of The Grapes of Wrath, you're not going to want to buy it again for some chintzy bookmark, but for the rest of you, this disc is Highly Recommended. John Ford's 1940 adaptation of John Steinbeck captures the original flavor of the celebrated novel while also translating it to cinematic terms. The Grapes of Wrath is a movie with a message, but one that entertains first and foremost. Henry Fonda is remarkable as Tom Joad, the young farmer whose family is set adrift within the Great Depression, and Jane Darwell won an Oscar for her performance as his steadfast mother. Ford's vision of the transforming landscape of American life celebrates the country's spirit and its natural resources--both the people and the land--and it makes for powerful viewing. 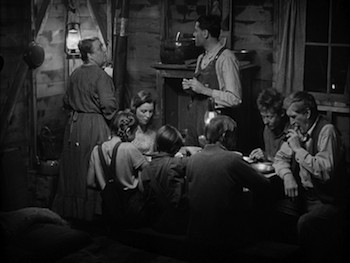 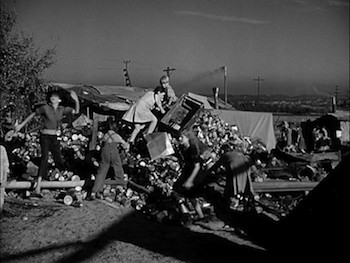