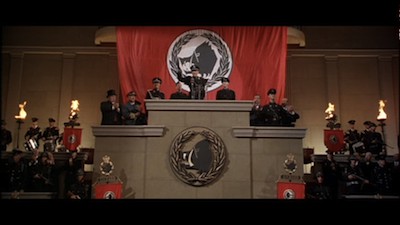 Let me say at the outset that this is not a new edition of the 1995, Sir Ian McKellen-led Richard III. The "Literary Classics Collection" version is exactly the same as the 2005 MGM DVD release, cover, flipper disc, and all. What is different here is that Fox have shrinkwrapped the DVD with "a removable bookmark that incorporates artwork and a quote from the respective film," and even that is a misleading description. The bookmark in question is part of a larger postcard that, in reality, is a flyer for the other DVDs in this re-release initiative. It's not even perforated so you can remove the actual bookmark; it's really just an oversized ad. If you have Richard III in your collection, then you have no need to buy this, you already own it.

When I was in 10th grade, the state of California required that all sophomores in high school should read William Shakespeare's Julius Caesar. By the time I was in 12th grade, they had amended that to Richard III. One of my elective classes that year was being a teacher's assistant for my favorite English teacher, Mrs. James, and so I got to read along with the class when they covered the material. I much preferred this tale of villainy to the far more staid Caesar, and even when the kids had to learn the "lights burn blue" speech and write it down from memory, not even grading 50 different versions could lessen my fandom. I actually knew the speech myself by the time I had gotten through them all, but alas, I don't remember it anymore. (Though, for some reason, I remember the "tomorrow and tomorrow and tomorrow" soliloquy from Macbeth that the juniors had to memorize.)

This was several years before the Sir Ian McKellen portrayal of Richard came to the screen, a take on the classic material that reinvigorated it for a modern age. Directed by Richard Loncraine (Wimbledon, The Special Relationship) from a script he co-wrote with his star, this 1995 production moved the Bard's history through history and transplanted it into 1930s London, portraying the Civil War in Britain as a parallel to the rise of fascism during that decade. Luckily, in the real world, that political party never took hold of power the way Richard does, and World War II soon slung their hash but good.

Such recontextualizations of Shakespeare's plays are fairly common, but rarely are they as successful as this production of Richard III, which stands alongside Baz Luhrmann's Romeo and Juliet as the definitive progressive Shakespearian cinema of the 1990s. (I am not discounting Branagh, whose movies were far more successful as more traditional stagings.) The tangled plot of Richard's murderous taking of the throne and the war that followed fits perfectly into the new time period, and the gorgeous jazz-age styling gives this costume drama a cool and clean veneer that plays well against the script's dirty dealings. Like Lurhmann, Loncraine declares his style boldly. The movie opens with a fantastically staged siege and the killing of Richard's uppermost enemy. The sound of gunfire punctuates the appearance of each letter in the film's title, obscuring the villain's face, before leading into a musical montage that shows the breadth of the kingdom. It's amazing to see a Shakespeare adaptation begin with an extended absence of dialogue. 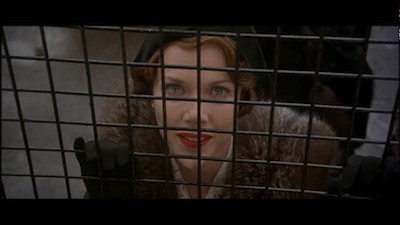 For those who aren't familiar with the story, Richard III details the ascension of power by a distant relative of King Edward IV (John Wood), in whose army he serves during a clash amongst British factions. Richard is a man plagued by physical deformities--a hunchback, a limp, and an amputated arm. He is a decorated military leader, but he is scorned and underestimated for his appearances. Beginning with the death of Edward, the master strategist starts to plot his way through the Royal family, until ultimately he is positioned to take the crown. Along the way, he kills his brother (Nigel Hawthorne), marries a woman (Kristin Scott Thomas) whose husband he shot dead, and eventually murders her to marry Edward's widow, Queen Elizabeth (Annette Bening). This remarkable cast also includes Jim Broadbent, Dominic West, and Dame Maggie Smith. All of the performers are extraordinary, with Bening being particularly noteworthy for how well she takes to the text. The only bad performance is, surprisingly, from Robert Downey Jr., who tries too hard as the Queen's brother, Lord Rivers. He appears to be constantly mugging, sometimes even unfairly distracting from his co-stars, and the rhythm of the dialogue doesn't sound like it quite fits in his mouth.

McKellen could have surrounded himself with baboons, however, and he'd have still carried off the movie. He is amazing in the lead. His Richard is a devious genius, content in his immorality, and absolutely cold blooded. The actor, of course, has an agile tongue and plays with Shakespeare's lines the way only a true master can. Loncraine stages the soliloquies in such a manner that it feels like Richard is engaging the audience as his confidantes. There is no reason to contrive reasons to get him alone, instead he just turns to us and tells us what is on his mind. These monologues propel the action, and McKellen and Loncraine splice up the speeches so that they naturally lure us from one setting to the next. It's a conceit they carry through all the way to the end, as the last shots include the man who defeats Richard turning to the camera and taking over the lead, peering right out of the screen at the villain's collaborators.

Though Loncraine doesn't put too much emphasis on any added political meaning that comes from the Nazi and fascist parallels, this new setting does add to and contemporize the meaning of Richard III. The character has always been as outwardly ugly as he is foul on the inside, and McKellen's interpretation exposes how petty powerful men can be when their foundations are built on hate. There is an irony to this tragic figure: by insisting on the humanity denied him in the way that he does, he becomes the monster his detractors have always accused him of being. It's the difference between a smart restaging and an arbitrary one. This was not a conversion picked randomly.

All in all, this Richard III is a lively version of the play. It is visually and intellectually potent, and easily rivals the more traditional Olivier version from 1955 as the definitive cinematic production of this popular historical play. The incredible star-making performance from Sir Ian McKellen and the deft staging of Richard Loncraine both breathe new life into literature that is centuries old, proving just how timeless a true classic can be. 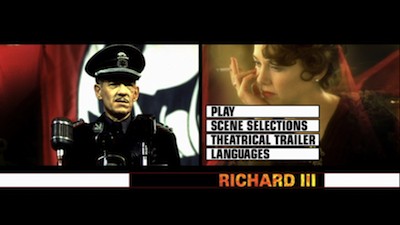 Video:
This is a flipper disc, and so on one side we get a widescreen version at 2.35:1 and on the other a full frame pan-and-scan. I'll be honest, I skipped the side B version, why dwell in the foolishness of the past? The widescreen version is the way to go, especially with a film this lovely, and the transfer is actually quite good even for being several years old. The colors look fabulous. My only complaint is that at times the resolution was a little soft.

Sound:
The audio for Richard III is mixed in 5.1 surround and though not super souped-up, it does have some nice front and back effects that lend atmosphere to the viewing experience, particularly in the battle scenes, but also at times in the cavernous back rooms of the palace.

A French dub is presented in mono, and there are also French and Spanish subtitles, as well as English Closed Captioning.

Extras:
The only extra is the original theatrical trailer.

Oh, yeah, and that bookmark. The really big one. With the big ad on the back.

FINAL THOUGHTS:
Highly Recommended. Even though the "Literary Classics Collection" DVD is the same disc that has been out for five years, the 1995 version of Richard III starring Sir Ian McKellen is a great addition to any Shakespeare fan's collection regardless. Based on a well-known stage production that also starred McKellen, the movie features an incredible performance from the gifted actor, turning one of the Bard's greatest villains into a reptilian mastermind, and Richard Loncraine's version of 1930s London is gorgeous and lively. This play may be centuries old, but this staging makes it feel contemporary, with plenty to say about modern politics and man's tendency to drift into dark philosophical arenas. 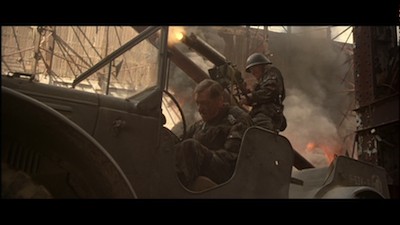