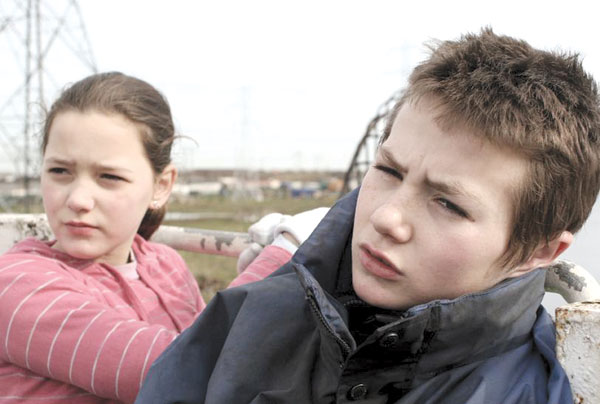 Lance Daly's short feature film is
a miniature jewel that sparkles with effective moods and situations,
anchored by two remarkably intuitive performances by pre-teen, non-professional
lead actors. In an arc that takes us from the depressed working-class
outskirts of Dublin, down the River Liffey into a fable-like vision
of the city itself, Daly's film recreates the unmistakable and easily-forgotten
sensation of what it feels like to be a child experiencing that first
taste of freedom in a world that discovered to be larger than ever before
imagined - a place where anything can happen.


The story is simple. Dylan (Shane Curry) and Kylie (Kelly O'Neill) are
next-door neighbors in a run-down suburb. One day, they escape their
abusive families and leap aboard a small riverboat, whose pilot takes
them all the way to Dublin. On top of the city's unfamiliarity to Dylan
and Kylie, it's Christmastime to boot, making Dublin a sheer wonderland,
alight with festivity. The two go to the mall, buy clothes, and go ice
skating. Still, they can't escape the city's underbelly: at one point,
after unsuccessfully searching for Dylan's older brother, they are pursued
by adult male predators. The next morning, their options seem extremely
limited, in stark contrast to the wild possibility of the previous evening.

Lance Daly constructs a simple enough narrative utilizing a variety
of cinematic tools. The film is shot in widescreen; composition is excellent.
The opening and closing sequences (set in Dylan and Kylie's ugly neighborhood)
are shot in black and white. The slow fade into and out of color as
the duo enter and leave Dublin is almost unnoticeable. These technical
choices are next to nothing, however, when it comes to the notoriously
difficult business of working with child actors. Daly was either extraordinarily
lucky, or he was wise enough to cast young actors whose personalities
melded ideally with those of the characters. Maybe it was some of both.
The end result is a pair of on-the-nose performances that effortlessly
create distinctive characters. Curry's Dylan is an inward, prematurely
hardened kid who barely emotes at all, while as Kylie, O'Neill is voluble,
emphatic, and adventurous. They are well-matched opposites whose mutual
affection grows as the story progresses. Yet by the film's end
we begin to sense that these two aren't exactly "meant" for
each other. They are two very young people who have shared an important
moment, but who will ultimately grow up pointed in different directions,
despite their having experienced something unforgettable together.


At a swift 74 minutes, Kisses is nonetheless a full, complete
film. The story of Dylan and Kylie concludes with an inevitable return
home. The concluding sequence is shot in a way that might be a bit much;
it's still moving, though, and memorable. I just wish Daly had pulled
back ever so slightly on the use of slow-motion; but I often react this
way to slow-motion. It's a minor point. Aided by his outstanding young
actors, Daly's film is elegant, heartfelt, imaginative, and real.

The widescreen image looks great, thanks to the folks at Oscilloscope
Laboratories. Good contrast, sharp detail, and the presence of grain
contribute to a visual experience that is very close to the image that
was exhibited theatrically. The subtle transition from black-and-white
to color (and back again) retains its understated quality here.

The stereo soundtrack is vivid and engaging without being sonically
spectacular - it's just not that sort of movie. Ambience is still good,
though, and the occasionally thick Irish accents are subtitled for Americans'
convenience.


The few bonus features are good. A full-length commentary track
features the two leads, Curry and O'Neill, sounding quite like their
characters in the film. There are also some outtakes and a behind-the-scenes
featurette.


Kisses manages to cast a fond eye on childhood without being
sentimental and without avoiding the nasty side of being a young person
in a world run by careless, clueless adults. Lance Daly's technique
reflects an elegant command of his craft, and a rare confidence in handling
his young actors. Highly recommended.