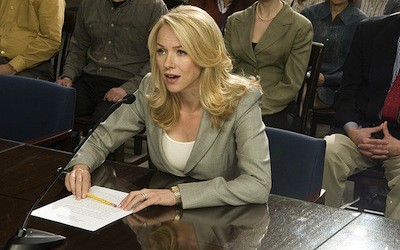 It's a story we all know, and that's not just me talking, that's one of the points of the film. Fair Game asserts that everyone knows the name Valerie Plame, and making sure we knew her name was the very reason she was outed as a C.I.A. agent: so we'd start talking about her and stop talking about the war in Iraq.

Though, honestly, I don't think we do know the story. At least I didn't. I know what happened after her cover was blown for the most part. I know who did it, the consequences, the public mudslinging. What I didn't know was what comprises the first half of Fair Game: all that came before.

Fair Game is the new film by Doug Liman, best known for Go and the first Jason Bourne movie. It is based on books by Valerie Plame and her husband Joseph Wilson, and it was co-written by Jez Butterworth (Birthday Girl) and first-time screenwriter John-Henry Butterworth. Fair Game stars Naomi Watts as Plame and Sean Penn as Wilson. There are other small players, including David Andrews as Scooter Libby and Sam Shepard as Plame's father, Colonel Sam Plame, retired from the U.S. Air Force. The movie picks up Valerie's story just weeks after 9/11, when she was working overseas in an undercover operation tracking the illegal trading of uranium. The cold open puts her right in the thick of it, out in a foreign field, laying down some serious spy moves. It's clear from the get-go she's gutsy and good at what she does.

This is why she is put in charge of intelligence in Iraq. By the time she is knee-deep in the assignment, it's already known that the aluminum tubes that keep getting pushed at her aren't anything to be concerned about, and after the agency asks her husband, a former ambassador to Africa, to go to Niger to investigate an alleged uranium sale, he debunks that intelligence, too. Valerie realizes that the true WMDs are the nuclear scientists who have been out of work since the first Iraq War and could be snatched up by foreign agencies if the U.S. doesn't grab them first. This is one of many operations she was in charge of when her husband published a newspaper editorial discrediting the Bush Administration's justification for invasion, and it's one that fell apart when Scooter Libby leaked her identity to the press. Her career hit a full stop.

This first half of the movie is fascinating stuff. Liman constructs a swift espionage thriller out of Plame's story. Acting as his own director of photography, he shoots using a dialed-back Bourne aesthetic--not so much shaky cam, but a fly-in-the-room view that lends immediacy to the situations. Intelligence work requires a lot of information, and it rolls by quickly, keep up or don't. Watts is excellent as Plame. She's smart and confident, and she carries the job like she owns it. 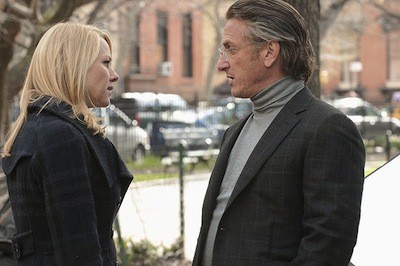 Unfortunately, it kind of stops being her movie when everything hits the fan. Fair Game is a film with no backfield strategy. There is not much arc here. Valerie is exposed, her job stops, she gets sad, and Joe Wilson gets mad, and him being mad is more interesting than her being sad. Sean Penn brings all of his righteous fury to the role while still keeping it in check enough to stay away from proselytizing. His gravitas lends credence to the Wilson crusade, even as the writing sometimes dips into preachiness or sap. Some of the dialogue both actors have to contend with as their characters fight and then reconcile and then fight some more can be a little clunky, but they are champs.

Only problem is, the drama here isn't very operatic. There is no sting operation that Valerie can take to clear her name, no smoking gun for them to uncover to snag Scooter Libby or Karl Rove. Joe just keeps beating at the bushes until he gets tired, and then indictments fall out of the sky like a deus ex machina. It's true to life, I'm not saying Liman or the Butterworths should have added those things; I'm more wondering why no one realized that true life kinda sorta goes nowhere.

It's hard to completely dismiss a movie where everybody does good work. Liman stages his scenes well and he knows how to get what he's after, and all the performances, even the tiniest supporting roles, are absolutely right on. It's just that here, the reality of what happened doesn't really sync up to what we normally expect in a narrative structure. Fair Game would have probably made a better documentary than it does a dramatic movie; it's a story that is worth telling, just not this way.