Shout Factory // PG // February 1, 2011
List Price: $19.93 [Buy now and save at Amazon]
Review by Stuart Galbraith IV | posted February 2, 2011 | E-mail the Author
An expensive flop when it was new, Lucky Lady (1975) today is so ill thought of that its owners, 20th Century-Fox, never bothered releasing it to DVD format, eventually sub-licensing it to Shout! Factory - this despite the presence of three big stars: Gene Hackman, Liza Minnelli, and Burt Reynolds. The story of rum-running off the coast of Baja during Prohibition, it's quite lavish though its leisurely pace, unconventional sexual relationships, and especially its inconsistent tone bemused audiences expecting something much more along the lines of The Sting (1973), which its advertising, soundtrack, and basic plot all hint at.

Viewed today the problems remain but there's still much to like. Director Stanley Donen (Singin' in the Rain, Funny Face) enjoyed a string of superb '60s films - Charade, Arabesque, Two for the Road, Bedazzled. None of his '70s films - The Little Prince, this, and Movie, Movie - quite hit the bulls-eye critically or commercially, but each is interesting and unusual.

Shout! Factory's DVD offers an excellent 16:9 enhanced transfer and includes a few vintage featurettes, trailers, and the like. 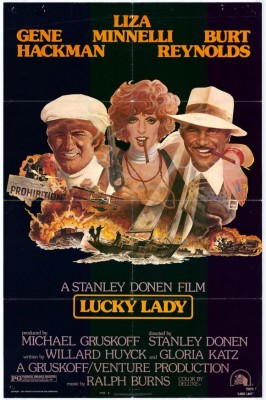 The film gets off to a strange start; it's like stumbling into the theater a reel-and-a-half into the story. Claire (Minnelli) pays a late-night visit to her dead partner's grave in a south-of-the-border cemetery. A singer at his "Harry's Café Americano" (a reference to Rick's in Casablanca?*), she and Harry had been smuggling Mexican immigrants across the border and with him now dead she turns to broke American playboy Walker Ellis (Reynolds) to replace him. Among the illegals is down-on-his-luck American Kibby Womack (Hackman), who saves Walker's neck when the deal goes sour.

Kibby, who knows how to handle a gun, muscles his way into Claire and Walker's next big scheme, to smuggle a yachtful for booze from Baja into California. Joined by young but experienced rumrunner and shipmate Billy (Robby Benson), the trio have little problem buying crates of liquor from Canadian smuggler Capt. Rockwell (Michael Hordern) but soon run up against gangster McTeague (John Hillerman) and autocratic, incorruptible U.S. Coast Guard Capt. Mosley (Geoffrey Lewis).

The film's already sizable $10 million budget ballooned to $22 million - a huge sum in 1975; think $200 million in today's money, and the film was in production nearly 250 days. The original ending apparently didn't work, and reshoots didn't help much, either, resulting in a compromised wrap-up to the story that's less than entirely satisfying.

Worse, Donen's company encountered numerous problems shooting so much of the film on the water, particularly its massive full-scale sea battle climax between dozens of amateur rum-running vessels and the better-armored gangsters' ships, a veritable small navy. It's all done full-scale and, arguably, the largest such battle sequence of its type ever filmed without extensive use of miniatures or CGI. The rest of the picture is no less lavish; sets and costumes and extensively redressed real locations impress throughout.

The 118-minute film is described on the DVD's back cover as "a throwback to the great screwball comedies of the 1930s," but this is nonsense and it bears little resemblance to '70s movies that actually attempted to do this, like Peter Bogdanovich's What's Up, Doc? (1973). Rather, Lucky Lady is sort of a comedy with moments of deadly seriousness, like screenwriters Willard Huyck and Gloria Katz's earlier hit, American Graffiti (1973), while at other times playing like a straight romantic-adventure-melodrama with witty dialogue. (Claire's response when Walker asks her if she likes his skipper's cap: "Maybe it'll keep the woodpeckers off.") In one of the featurettes included with the DVD, Minnelli describes the relationships as harking back to the Gable-Harlow-Tracy films of the 1930s, an astute comparison.

It's almost like each of its three stars thought they were the film's central focus: Hackman nicely underplays his character, Reynolds steers the film toward the broader, comedic direction of his later starring vehicles, while Minnelli plays her role as if the film were a love story with musical numbers. This isn't necessarily a bad thing as their conflicting approaches keep the film on edge, with Reynolds gamely playing something of a schmuck, Minnelli the assertive leader of the trio, manipulating the men and hungry for respectability and class, Hackman the drifter better-grounded than either of his naïve partners. Claire eventually manipulates the men into a ménage à trois, which must surely have surprised family audiences stumbling into this PG-rated release.

To its credit, Lucky Lady is exactly the kind of movie that would never be made today, at least not by a big American studio: leisurely-paced and adult with frank, non-judgmental sexuality, limited in scope and character-driven until a big-scale climax unassisted by computer technology. Some of the humor is misplaced and the picture is a little pokey at times, but as a kind of road movie-at-sea it's unique and memorable though overall not a great success.

Lucky Lady's DP was Geoffrey Unsworth, the great cinematographer who shot 2001: A Space Odyssey, Cabaret, Beckett and many other fine films. As he often did in his '70s movies (Murder on the Orient Express, Superman), Unsworth employs soft-focus for much of the film. Early video transfers and home video releases often looked smeary and unappealing, but on big widescreen TVs the 1.85:1 Lucky Lady is colorful and visually sumptuous. The mono audio is crisp and clear but not supported by any subtitles or alternate audio options.

Included are two unusually good 4:3 vintage featurettes, "The Lucky Lady Log" and "Launching Lucky Lady." All three stars plus Donen are interviewed, and there's good behind-the-scenes footage oddly proudly acknowledging the outrageously long production and which includes the shooting of scenes not in the film.

Three trailers, two matted and one full-frame, are also included, along with a TV spot.

Though it doesn't quite come together, there's enough good material in Lucky Lady - the three leads, the supporting cast, some of the dialogue, the lavish production values, and an ultimately engaging story - that it's definitely worth seeing. Recommended.


* Later, in a hotel ballroom, a young blonde sings "All I Do Is Dream of You," the 1934 Brown-Freed song made popular again in Donen's Singin' in the Rain.