Shout Factory // R // October 19, 2010
List Price: $19.93 [Buy now and save at Shoutfactorystore]
Review by Stuart Galbraith IV | posted November 9, 2010 | E-mail the Author
Time for another round of incredibly cheesy but entertaining exploitation films courtesy executive producer Roger Corman, from his New World/New Concorde period. This post-peplum match-up of The Warrior and the Sorceress (1984) and Barbarian Queen (1985) isn't for everyone - being predisposed toward campy sword-and-sandal films helps, and though both films are pretty bad and frequently totally ridiculous they more than deliver the goods in terms of blood, sweaty action, and sex.

Shout! Factory's 1.78:1 enhanced widescreen transfers, working with less than pristine elements, are excellent and in keeping with the drive-in atmosphere a batch of theatrical trailers have been added as an extra feature, along with a few deleted scenes from Barbarian Queen. 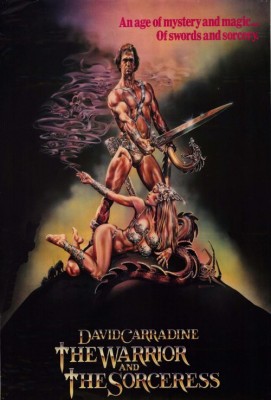 And what's up with David Carradine's head? It looks like it was squeezed in a vise.


When he heard I was reviewing this my pal Sergei Hasenecz said, "I'm curious to know how long it takes you to figure out what movie The Warrior and the Sorceress is obviously based on." About two minutes and 50 seconds. Riffing his Kung Fu character, David Carradine stars as Kain, last of a race of mystical warriors on the desert planet of Ura, in a shameless if amusing rip-off of Akira Kurosawa's Yojimbo (1961).

As with Kurosawa's film, The Warrior and the Sorceress opens with its mercenary swordsman arriving at a desolate village where two warring factions vie for its control (and in this case, specifically control of a precious water well). Obscenely fat Bal Caz (William Marin), who resembles comedian Joe DeRita in a diaper, and who keeps a pet monster that's like a cross between a Velociraptor and a demented Kermit the Frog, is the first to hire Kain.

There aren't so many changes from Yojimbo as there are additions, like a lizard race of cannibalistic slave merchants led by Burgo (Arthur Clark), wearing what look like dirty, hand-me-down prosthetics from The Last Starfighter's Dan O'Herlihy. Similarly, the role of the mother whose freedom is lost to gamblers in both Yojimbo and its first unauthorized remake, Fistful of Dollars (1964), here is altered to a beautiful sorceress named Naja (María Socas), who has the ability to fashion the invincible sword Zeg covets.

Socas is topless for the entire film, beginning to end, and mighty fetching, too. One imagines alternate takes were filmed with Socas wearing clothes, if only to facilitate cable and free-television sales for New World down the road - but in any case this is an apparently complete, 81-minute version of the film.

The Warrior and the Sorceress veers from Yojimbo's script more than Fistful of Dollars but in most respects is an even bigger rip-off because so many big scenes and tiny gestures are directly and obviously lifted and imitated from the original film, such as way Kain reaches up to scratch his neck from under his wardrobe - exactly like Toshiro Mifune in Yojimbo. The story is credited to artist William Stout and director John C. Broderick; Kurosawa and his writers go uncredited. This may not be Stout and Broderick's fault, however; apparently Corman was never sued over Battle Beyond the Stars (1980), his sci-fi version of Kurosawa's Seven Samurai (1954), and perhaps its success emboldened him to reach deeper into Kurosawa's pocket. To everyone's credit, The Warrior and the Sorceress is no worse than the next Yojimbo remake, Walter Hill's awful Last Man Standing (1996). And that film didn't even have an exotic dancer with four breasts. 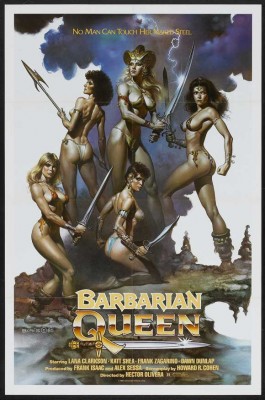 Like apparently The Warrior and the Sorceress, Barbarian Queen was filmed entirely in Argentina by native son Héctor Olivera as an Argentinean-U.S. co-production, possibly using some of the same sets. Corman's influence is nonetheless felt: there's a rape and naked breasts just 38 seconds after the fade-in.

Vaguely Roman troops raid the humble village where Amethea (Clarkson), the Barbarian Queen, is about to be married. They kidnap her sister (Dawn Dunlap), and kill or enslave all the men, including Amethea's betrothed, the King*, who they send to a very Spartacus-like gladiator school.

Vowing to liberate her people from the Roman oppressors, Amethea bands together with the village's few surviving female warriors, including Tiniara (Susana Traverso) and Estrild (Kate Shea), the latter severely traumatized after her rape. Infiltrating the local castle, Amethea is eventually captured and, in the film's most famous scene, is stripped, tortured, and raped on the rack, only to wreak vengeance by crushing her assailant's penis inside her vagina.

Barbarian Queen isn't all that terrible - for its intended audience the film has the right stuff - plenty of action and half-naked women, and at 71 minutes is just about the perfect length. The peso must go pretty far in Argentina, as the film looks fairly lavish for what must have been a paltry budget by American standards. The exterior sets of the Roman castle are lavish in a sub-sub-Samuel Bronston kind of way, and there are lots of costumed extras, though the Barbarian Queen's village looks cheap. In one scene she sets fire to a single straw hut prompting one Centurion to overreact with, "She's burning the village!"

Because of the mostly Spanish-speaking cast, all the second unit footage was obviously shot without live sound, resulting in much overenthusiastic ADR during post-production. This dubbed-in background dialogue is funnier than anything in script, such as these mutterings heard after the Romans thrash Amethea's village: "They're not so tough now, are they?" "Stay together! Stay together!" "Faster, or I'll cut off yer legs!" "C'mon, slave! We haven't got all day!" James Horner is co-credited with the film's score (somewhat distorted in the early scenes), though some or all of it may be stock themes.

Both films are presented in 1.78:1 enhanced widescreen on one single-sided, dual-layered disc, and both generally look quite nice, though their title elements are notably ragged and the heads and tails of reels are fairly scuffed-up. The region "1" encoded disc offers English mono tracks only with no subtitle options; audio is fine except for the bit of distortion at the beginning of Barbarian Queen.

These are limited to a handful of unenhanced, full-frame trailers and a few minutes of deleted scenes from Barbarian Queen.

Though certainly not for everyone, this double-feature set is nonetheless ideal for the adventurous movie-watcher looking for some offbeat, campy entertainment. Recommended.


* I have no idea who the actor is, but his performance is awesomely bad.