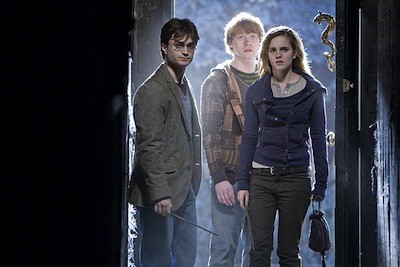 Okay, muggles, you can stop holding your breath now. Harry Potter and the Deathly Hallows: Part I is really good. It may even be the best movie in the series so far. I haven't enjoyed myself at Hogwarts this much since Prisoner of Azkaban.

The first of the two-part conclusion, Deathly Hallows: Part I is an adaptation of the last book in the J.K. Rowling series. The story opens sometime after the end of The Half-Blood Prince. Dumbledore is gone, and Lord Voldemort (Ralph Fiennes) has taken over the Ministry of Magic. The Order of the Phoenix, the secret group that defeated He That I Shouldn't Have Named when he last made a play for domination, are taking Harry Potter (played, as always, by Daniel Radcliffe) into hiding. He is, of course, the chosen one, and it's believed that only he can stop Voldemort. The mission is to find the remaining Horcruxes, magical objects that contain pieces of a Voldemort's soul. As long as these trinkets exit, he will never die.

Things go dark rather quick in The Deathly Hallows, and Harry and his crew, Hermione Granger (Emma Watson) and Ron Weasley (Rupert Grint), are exiled to the wilderness to try to figure out what to do. I haven't read the books, but I'm told this is the one where the teens spend a lot of time camping. For the cinematic version, writer Steve Kloves (who wrote the screenplays for all the films) and director David Yates (the man behind the camera on the final four) have compacted most of that stuff, and the movie never lingers long on these foresty pit stops. 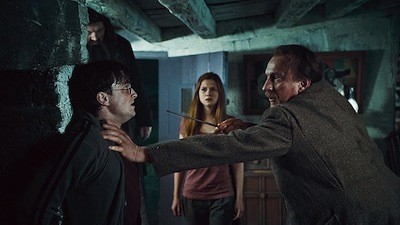 In fact, The Deathly Hallows: Part I has a lot of forward momentum, and there are quite a few exciting action sequences that keep the story moving. There is a fast-paced skybound broom and cycle chase, a few wand-to-wand duels, and even some nerve-wracking scenes of true suspense. My favorite bits in the movies have always been when we get to go into new environments and poke around. For instance, an extended sequence at the Ministry of Magic is inventive, thrilling, and even funny. Yates is joined this time around by cinematographer Eduardo Serra (Unbreakable), who is equally adept at capturing the moodiness of the story and keeping it lively. There is a lot of running, flying, and teleporting in The Deathly Hallows: Part I, and the twisting camera moves turn the magic into a dizzying head rush. There is one great camera push in particular, when Snatchers are pursuing the kids in the woods. They come running at the screen as the camera moves in, using the opposing momentum to increase the adrenaline surge.

It's too bad that the Harry Potter franchise took this long to mature into such a solid adventure series. The Deathly Hallows: Part I is what all of the movies should have been like, and it makes it even more frustrating that The Half-Blood Prince was such a goopy morass of teen angst. Even the young actors have grown into their own over the six films. Radcliffe, Grint, and Watson make for an excellent onscreen team. It's impressive overall, when you think about it, that all of these kids have developed so well. It's been nine years since the first movie, and the producers took a real gamble that adolescence would be kind to their leads. The majority of the ensemble, young and old, makes its way back to see this cycle through. If nothing else, Harry Potter can go down as the most ambitious and most consistent of the big cinematic miniseries.

Harry Potter and the Deathly Hallows was over 600 pages, which is more story than one movie could contain. The decision to split the tome in half and make two movies was largely a commercial move--five hours is a long time for an audience to stay seated and also it limits the amount of showings per day. The filmmakers end up using this to their advantage, choosing an appropriate breaking point to give their movie the maximum dramatic punch. Part I builds to an emotional crescendo, including one extremely affecting event near the end of the picture (I was surprised to find myself getting a little misty-eyed). The conclusion is satisfying, despite not being a full resolution. The ultimate irony may be that most moviegoers will probably be up for rolling right into Part II. Potterheads would endure the length to get their fix. Unfortunately, we're all going to have to wait until July. 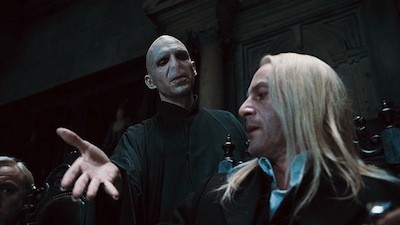