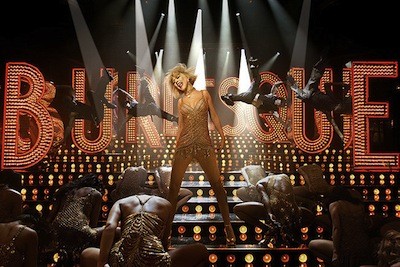 It's funny how many friends in recent weeks pulled me aside to have a serious chat. They wanted to make sure I wasn't getting my hopes up for Burlesque. I'm not joking. I'm an unapologetic Christina Aguilera fan, and they were worried I'd be disappointed. Sorry, guys, I may love Xtina, but that doesn't mean I can't tell when she's attached herself to a bit of a stinker. Everybody needs to pass gas every once in a while.

Burlesque is everything I expected, and also gives me the very least I hoped it would. The divine Ms Aguilera stars as Ali, an Iowa girl who picks up and moves to Los Angeles to pursue her dream of being a singer. After a whole day of pounding the pavement, she happens upon a little club at the end of the Sunset Strip. It's an old-fashioned burlesque music hall, run by Tess (played by Cher, or some close approximation of the same). The pretty girls dance in their underwear and lipsync to Marilyn Monroe songs. The cute boys work behind the bar wearing leftovers from Scissor Sisters-singer Jake Shears' old wardrobe. Ali has never seen anything like it. She wants in.

And, surprise, Ali has just the pluck needed to get up on that stage. That's because, as we've learned from one brief cutaway to what goes on inside her head, she's a girl who believes that she's in a movie musical. Just her bad luck, I guess, that she falls a hair short of being in one. Burlesque is a movie and it does have musical numbers, but I wouldn't exactly call it a musical. It's more like a Pussycat Dolls production of Chicago, at least in terms of aesthetic. Like a music video compilation with a threadbare story woven in between.

If you think the story I've described so far sounds familiar, well, get this. Turns out that Jack (Cam Gigandet), the hunky boy behind the bar, is really a songwriter who doesn't have the guts to grab the brass ring. He also doesn't have the guts to go after Ali when the gettin' is good, and she starts to be wooed by nasty real estate developer Marcus (Eric Dane). Marcus is a regular customer at Tess' club, and he even dabbles with some of the dancers, namely bratty diva Nikki (Kristen Bell). He's also trying to bail Tess out of her money woes and buy her business, something Tess' ex-husband (a sallow Peter Gallagher) would very much like to see happen before the bank takes everything. Just what will the burlesque troupe do to get out of this pickle? Could the answer be that blonde farmgirl who keeps saying she can sing her own numbers?

Burlesque is written and directed by Steve Antin, whose only previous directorial credit is a sequel to The Glass House--and if you remember what The Glass House is, well, what the hell is wrong with you? And if you knew there was a sequel, I am officially scared of your DVD collection. Antin isn't a terrible director, he could probably make ripping music videos for Fergie and the like, but he is an absolutely awful writer, and his clumsiness behind the keyboard is most likely responsible for him blowing it behind the camera. When it came down to it, Burlesque should have been an honest-to-goodness musical. Antin should have taken the songs off the stage and injected them into his characters' real lives. Just once or twice, Christina should have burst out into song during an everyday moment, with the lyrics acting as a narrative device. Lord knows there were probably a couple of old-fashioned showtunes in whatever time capsule Antin cracked open to get this screenplay. Shift this flick into a landscape where people break into song at any moment, and I almost guarantee you the fans of the genre would have forgiven all the other hokum. Burlesque could have been a nostalgic throwback. Hey, kids, let's put on a show! 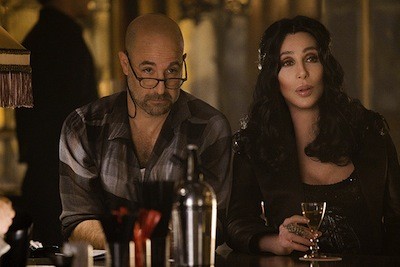 But, no, I got the kind of dross I suspected Burlesque would be. It's Glitter meets Coyote Ugly, though thankfully better than both. To her credit, Christina Aguilera carries herself with dignity despite the script's best efforts to humiliate her. Cher is a prop at this point, something more suited to have a horror movie franchise built around her botox and plastic surgery than a serious actress. Most of the supporting cast muddles through with performances suitable for their future on the Lifetime Channel. Only Stanley Tucci somehow comes through unscathed. He's essentially reprising his role from The Devil Wears Prada, and he's having fun with it. He knows he's in a turd and has the smarts not to give a damn, and he's really good doing it.

Which brings me to the least I could have expected--or my greatest hope, depending on how you look at it. The music in Burlesque is great. The dance performances are fun and fast paced, and the jazzy songs are good vehicles for Christina's voice. The basic sound is in the same vein as her Back to Basics album, a little modern techno and hiphop tangled up in swing and torch songs. Most of the songs are up-tempo, though there is one gorgeous ballad ("Bound to You"). Antin does cut some of the numbers into the story so they serve as narrative commentary. Cher in particular gets a song intended to double as an interior monologue. Unfortunately, "You Haven't Seen the Last of Me" is also intended to be a showstopper, and I guess it does stop the show--just in all the wrong ways. Her pipes simply don't compare to her younger co-star.

The songs are also staged well, with lots of style and delectable costumes. The fast editing could have maybe been dialed back, but what can you do. This is 2010. People write sitcoms on Twitter these days. Oh, and apropos of nothing, Famous Amos wins the award for best product placement of the year.

So, to sum up, I want to thank my friends for being concerned for my emotional well-being. Rest easy, Burlesque is not the unmitigated disaster it could have been, and I consider that a fair trade-off for it not being the triumph I desired deep down. And don't worry, Christina, I still love you. Hit me up on the Facebook sometime. Maybe we can do lunch. Just so we're clear up front, though, I'm straight. I don't want us to get into the same misunderstanding as Ali and Jack in the movie, because that would be ridiculous! 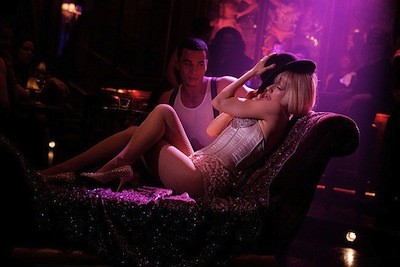