The Criterion Collection // R // February 8, 2011
List Price: $39.95 [Buy now and save at Amazon]
Review by Stuart Galbraith IV | posted March 2, 2011 | E-mail the Author
Federico Fellini's Amarcord ("I Remember," 1973) is a semi-autobiographical tapestry about a hometown populated with the director's usual assortment of grotesques, though here presented with great warmth and affection. The film was universally hailed an instant classic; in America it won the Academy Award for Best Foreign Language Film and Fellini himself was nominated in both the Best Director and (with Tonino Guerra) Best Original Screenplay categories, unusual for a non-English-speaking film. Influential critics like Pauline Kael, Vincent Canby, and an emerging Roger Ebert enjoyed a more pervasive influence back then, and films like Amarcord were real "event" movies anyone with an ounce of sophistication just had to see. Though hardly a blockbuster in the usual sense, by art house standards Fellini's early-'70s films certainly were just that, threatening to break into the mainstream.

It's basically a series of anecdotal vignettes in a borgo over a single year in 1930s Fascist Italy, a community suggested by Fellini's own hometown of Rimimi. In the film, characters often directly address the movie audience (or perhaps an unseen filmmaker, a la The Office) telling tall tales, sharing boyhood fantasies, and revealing life-defining moments. And there's a lot of farting.

Of cinema's great directors, I confess to never fully embracing Fellini. I've seen most of his major works at least twice, but as much as I admire his unique and unmistakable visual style, I've always felt like I was looking into a fish tank and never part of the experience the way I'm frequently sucked into the movies of Kurosawa, Visconti, Truffaut, and other contemporaries. Amarcord, however, is among Fellini's more accessible works, though it's also frequently sophomoric if agreeably bawdy. Time hasn't diminished its reputation, though I wonder how it would be received if made today.*

Criterion first released Amarcord to DVD back in April 1998, but then reissued it with a new master and scads of extra features in September 2006. The new Blu-ray edition retains those extras while significantly improving the image. 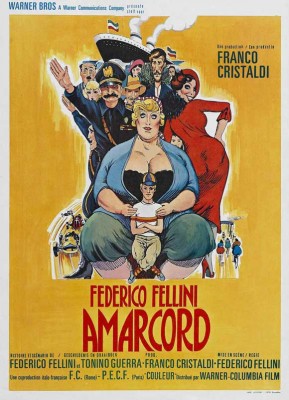 The movie opens with the arrival of manine puffballs floating through the city, signaling the arrival of spring. Later, at a huge bonfire in the city square where an effigy of the "Old Witch of Winter" is burned, other characters are introduced: beautiful Gradisca (Magali Noël), nicknamed "S'il vous plaît," is likened to a glamorous Hollywood star; the hugely-stacked tobacconist (Maria Antonietta Beluzzi) is built like a Russian masseuse; Volpina (Josieane Tanzilli), the skanky town nymphomaniac, looks wild-eyed from the sidelines; town lawyer and history buff (Luigi Rossi) warmly guides the audience on a tour of his fair city.

More or less at the center of this densely-populated universe is Titta (Bruno Zanin), a young man who lives with his large family: bricklayer and unionist father Aurelio (Armando Brancia); mother Miranda (Pupella Maggio, later Jacques Perrin's aged mother in Cinema Paradiso); his increasingly doddering grandfather (Peppino Ianigro); and Uncle Teo (Ciccio Ingrassia, Dr. Goldfoot and the Girl Bombs), a madman released from a nearby asylum to his family for awkward annual outings.

The film has no real story, but rather is a series of thematically linked mini-episodes. At school Titta and his classmates entertain themselves pulling pranks on the various teachers; in one scene they create a long pipeline out of rolled-up paper to urinate at their algebra teacher's feet from afar. A street vendor (Gennaro Ombra) recalls his highly suspect beckoning to a visiting sultan's harem at the local luxury hotel. In the film's best scene, the townspeople take their small boats out to see the late-night passage of the SS Rex, a Titanic-like ocean liner later sunk during the war. It's a marvelous scene, almost entirely yet vividly realized on a completely dry soundstage using backdrop paintings and the like. If you look closely, even the liner's wake is actually fluttering black plastic (or something like it), not water.

In another memorable scene, Titta visits the buxom tobacconist just as she's closing her shop for the night. He flirts with her, betting he can lift the enormous woman. Aroused, she reveals her colossal breasts and nearly suffocates Titta in a momentary flash of passion and ecstasy. It's a great moment: funny and sexy, frightening and embarrassing all at once.

With its too-old students and exaggerated stereotypes: teachers, priests (and a midget nun), soldiers, etc., Amarcord is deliberately unreal and theatrical; as with other Fellini movies it begs the question: "Where did he find those people?" Memories are distorted or completely fabricated.

Presented in its original 1.85:1 theatrical aspect (with windowboxed opening titles), Amarcord looks sensational, with only the title elements looking moderately dupey. A 35mm interpositive was sourced. The region "A" encoded disc features both the original Italian mono soundtrack with optional English subtitles as well as the excellent English-dubbed track. As Fellini shot his films from this period silent and often re-looped his on-camera talent with different actors, I found the English-dubbed version useful - I went back-and-forth between the two tracks - in that it allows the viewer to concentrate on the visuals rather than the relentless chatter.

Extras are identical to the 2006 DVD release, though most everything here has been bumped up to high-definition as well. Included is an audio commentary with scholars Peter Brunette and Frank Burke; Fellini's Homecoming, a 45-minute documentary; a video interview with actress Magali Noël; Fellini's character sketches; a presentation of Amarcord memorabilia; archival audio interviews; a deleted scene; American release trailer; and a fat booklet featuring essays by Fellini and Sam Rohdie.

I found myself warming up to Amarcord much more than I did when I first saw it some 20 years ago. The transfer is gorgeous and the supplements help put it into context for the viewer. It's an accessible film overflowing with imagination and spirit. A DVD Talk Collector Series title.