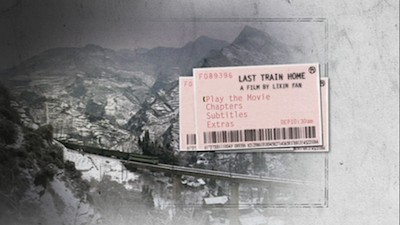 Next time you think about complaining about your commute, shut up for a second and pop Lixin Fan's documentary Last Train Home into your DVD player instead.

The Chinese-Canadian director begins his movie by introducing viewers to the largest annual commute in the world. Every year, 130 million migrant workers leave Chinese cities to return home to the outer provinces to visit their families. It's one mass exodus. Trains are packed with people for days on end, all rushing at once to get home in time for the New Year's holiday. Tickets sell out, and crowds gather for hours to be the first on.

Last Train Home starts in the winter of 2006, and it follows one family contending with the rush and the crowds. Changhua and Suqin Zhang are a married couple who left their village sixteen years ago, when their daughter Qin was just a baby, and traveled 2,100 kilometers to work in a factory sewing clothes. Qin stayed in the village to be raised by her grandparents. Several years later, the couple also had a son, Yang, and so their need to work doubled. All around China, parents move away from their families in order to earn money in the hopes that their own children can finish school and have better lives than they did.

Though Last Train Home begins with the New Year's migration, its story is really much larger than that. It's about the struggles of common people to improve their lives and the emotional difficulties that arise from a labor system that separates mother and child for a promise of economic stability that may never come. Qin is a teenager now and resents not knowing her parents, and they don't know what to do when she decides to drop out of high school and get a factory job herself, helping sew jeans to be exported to America. (In one funny scene, one of her co-workers laughs about the size of the pants, noting that two Chinese people could wear one pair of American jeans at the same time.) All these years of toil dissolve into nothing if the ones they are toiling for don't stick to the plan.

Lixin Fin, who was one of the producers on Up the Yangtze and acts as his own cameraman, sticks to a traditional documentary style, dividing his time between the adults and their daughter. He doesn't stop their lives for interviews, but instead stands apart as an observer--though sometimes you can't figure out how. It gets tense when the Zhangs are trapped in the mob at the train station. You expect the image to go spinning at any second, because surely Fin is going to get knocked down and trampled. Particularly in the 2007 travel season, when a railway malfunction shuts the whole system down and the gathered crowd starts to get testy.

Manning the camera himself allows Fin to focus on small details. An extraneous shot of an abandoned shoe at the train station adds a sad flare to the narrative, for instance, and there are many similar touches throughout. The director achieves an intimacy with his subjects, catching them when they are least guarded. Qin's tearful farewell to her grandfather's grave, her lonely hours in the factory dorms, the strained phone calls with her mother--the documentarian has complete access, and what he witnesses can be heartbreaking. The family drama turns violent at one point, pushing past the wall between filmmaker and subject, and it gets very raw. Yet, no sides are taken. The pain either feels is too real to assign importance to one or the other.

Last Train Home ends in 2008, amidst the global financial crisis and changing concerns for the Zhang family. The film stops, but it's clear life will not, and the narrative remains unresolved because questions still hang in the air for the subjects. The mood is definitely melancholy. It's hard to tell whether what they intend to be a positive change will really do any good. In the short term, it's only going to make life more difficult. Yet, Fin has edited the story together with such care and empathy, we can't help but hope for the best. In a way, the filmmaker has brought the world a little closer, creating an understanding that crosses all borders and highlighting the concerns we have in common. Teenagers and parents everywhere suffer the same growing pains and disappointments, and they carry on with resolve. We endure today's sorrows in hope of a brighter tomorrow. 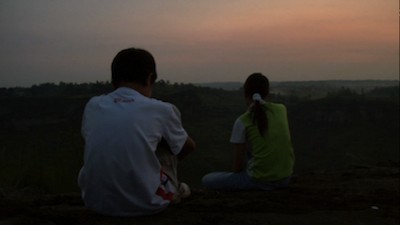 Video:
Shot digitally, Last Train Home looks particularly good on DVD. Shown in its intended 1.85:1 aspect ratio, the image has a strong level of detail, with good color tones and a faithful rendering of the real-life footage. There is a softness to a lot of the footage, as can often be expected with this kind of filmmaking, and is generally attributable to the shooting conditions. The anamorphic DVD transfer was made from the original HD elements, and it shows: the movie makes a smooth transition from one format to the other.

Sound:
The stereo mix of the original language soundtrack has a sturdy, full sound, with lots of ambient background detail. The optional English subtitles are paced and written well. 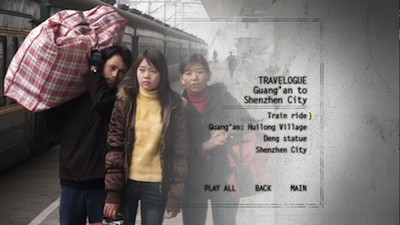 The DVD has three supplemental features. Eleven minutes of deleted scenes gives us more stories from other traveling workers, including an extended version of a scene in the movie, and also a clip of them dealing with police. The five-minute "Travelogue: Guang'an to Shenzen City" shows us footage from the train as well as general travel show-style scenes of landmarks. There is also the U.S. theatrical trailer.

FINAL THOUGHTS:
Highly Recommended. Lixin Fin's debut documentary, Last Train Home, is a heartfelt and insightful look at the plight of Chinese migrant workers, focused through two years in the life of one family. The Zhangs have been split for nearly two decades, with the parents working in the city in an attempt to create a better life for their children, who stay in a rural province with their grandparents. The clan is only reunited once a year for Chinese New Year's, a situation similar to millions of others in China. As the eldest Zhang daughter grows old enough to make her own decisions, the plans of her parents start to fall apart and all their efforts may turn out to be for nothing. Last Train Home is expertly observed and edited with care, pulling at emotional strings without betraying its central truth. It's a moving cinematic experience. 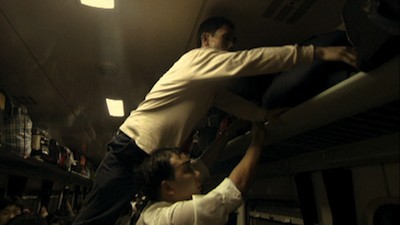