BBC Worldwide // Unrated // March 8, 2011
List Price: $34.98 [Buy now and save at Amazon]
Review by Stuart Galbraith IV | posted April 15, 2011 | E-mail the Author
Judge John Deed returns with four more 89-minute "episodes" that originally aired in late 2003 and early 2004. Season/series three sees a few cosmetic changes to the program, otherwise it's pretty much business as usual. After reviewing Judge John Deed - Season One & Pilot Episode and Judge John Deed - Season Two I don't have a lot more to add other than noting this set's highlights and minor tweaks to the established formula.

I admit slight disappointment with the growing emphasis on the title character's love life and how Judge Deed's enemies try to use real and fabricated evidence to destroy his reputation and get him off the bench. Deed's indefatigable womanizing comes awful close to resembling soap opera, while his enemies and their actions are painted in such broad strokes they teeter right up to the edge of high camp. Fortunately, the highly entertaining last show of this season redeems some of these problems.

The two-disc BBC and 2|entertain DVD, distrbuted through Warner Bros., has no extras but the two single-sided, dual-layered discs and are in 16:9 enhanced widescreen and look and sound great. 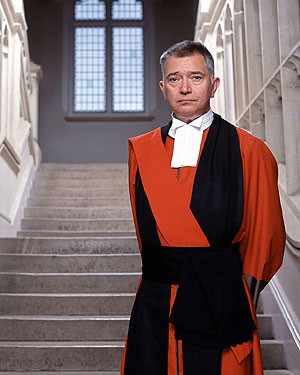 As before, Deed's allies and enemies are so starkly defined they become a bit of a weakness. In Deed's corner is his often frustrated, sometimes-lover Jo Mills (Jenny Seagrove), a one-time pupil now a QC (Queen's Counsel) who often appears before Deed; his devoted clerk, Rita "Coop" Cooper (Barbara Thorn); his rebellious but loving daughter, Charlie "Chaz" Deed (Louisa Clein), a law student and social activist; and police commissioner Row Colemore (Christopher Cazenove), whose wavering loyalties to Deed are spotlighted this season.

The first two series of Judge John Deed consisted of self-contained episodes. Here, the four shows are bit more serialized, insofar as the two biggest cases are spread across the four shows, though highlighted in one episode each. The first involves a Member of Parliament charged with mowing down a mother and her two children with his car while recklessly talking on his mobile phone. The second follows the case of a young mother with a brain tumor versus the mobile phone company she believes knowingly put unsafe product onto the market that ultimately caused her terminal illness. One gets the feeling creator-writer G.F. Newman is not a big fan of mobile phones.

The season gets bogged down first in Jo Mills's disciplinary hearing, a potentially career-ending crisis generated by Deed's enemies to discredit him, and later by the usual attempts by them to gain leverage in the politically/economically delicate trials Deed hears. His on-again, off-again romance with Jo, instead of being romantic merely tests the audience's patience. That said, things do get interesting when Deed, in claiming to want a long-term relationship with Jo, begins outpatient therapy hoping to put an end to his womanizing. His efforts are half-hearted however and, predictably, he winds up sleeping with his exotic-looking therapist (Amita Dhiri, The Bill).

The final show of the set is by all odds the best, as it explores the real problems of corporate greed putting profits ahead of public safety; of the willingness of scientists and universities to be bought off when they don't deliver the scientific results the big corporations want; big corporations transparently suppressing data about the safety (or not) of their products; and the lengths they will go to discredit their critics. (Spoilers) As extravagantly theatrical as his characters often are, Newman gets equal credit for taking bold and specific stands (in this case: cell phones are bad for human health and should be taken off the market) and for showing how big corporations will resort to dirty tricks to protect their interests. In a last-ditch effort to get the case thrown out, the phone company infiltrates Deed's computer, uploading child pornography onto its hard-drive. Then they call the cops. It doesn't get any worse.

As always, Martin Shaw is a delight as Deed; his rakish charm and intelligence serve the character well. It's really amazing that he's almost completely unknown in America.

Four feature-length episodes in 16:9 enhanced widescreen are spread over two single-sided discs. The shows may not have been shot in 35mm but they have that film-like look about them. The Dolby Digital stereo is fine also, and optional English subtitles are included for the deaf and hearing impaired. There are no Extra Features.

Despite a slight decline in quality and a certain repetitiveness, Judge John Deed still gets high marks. Take it with a grain of salt but be entertained anyway. Highly Recommended.

* Like American sci-fi films of the 1950s, virtually all the learned women in the series have male nicknames: Jo, Charlie, George, Coop.