Around A Small Mountain 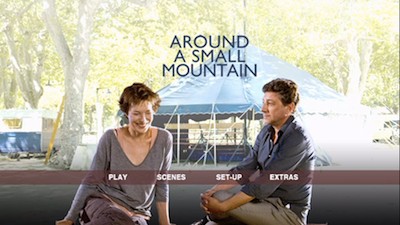 It's rare that a film so perplexes me as much as the latest from Jacques Rivette. I've been turning it over and over in my mind, but I can't fathom what he imagined filmgoers would take away from Around a Small Mountain. Then again, this movie is so far up its own backside, I don't think any consideration of the audience ever came into its making.

The film opens with Kate (Jane Birkin) meeting Vittorio (Sergio Castellito) on a mountain road. Her truck has broken down, he stops his sports car to give her a hand. They never speak, it is a scene played out in pantomime, a signal of the tired technique Rivette will use to sculpt Around a Small Mountain.

The pair meet again at whatever provincial town is at the end of the road. There Kate tells Vittorio that she is with a circus traveling through on its last tour. It is implied she is a high-wire performer, but we never see her in any of the anemic routines Rivette threads through the picture. No matter, because Vittorio is smitten and he begins a detached mission to woo were. This flirtation consists mainly of sticking around and talking to the other circus folk.

There is no sense of place or time in Around a Small Mountain. Days pass, or maybe they don't. Does the circus move on? It's hard to say. The movie is a series of arranged encounters, snatches of conversation, sometimes still, sometimes in motion. One presumes Rivette got a hold of the early '60s output of Michelangelo Antonioni, and the aging director lifted the surface elements of Antonioni's style and failed to notice how his characters wandered over meaningful subtext. Antonioni's characters talk about nothing and yet something still emerges; Rivette's just talk about nothing.

The script, composed on-the-fly by Rivette and multiple collaborators, completely fails to engage with the material in any meaningful way, and so the audience can never manage to engage either. The drama is so obviously orchestrated, and the playfulness even more so, that it ceases to have any meaning. It is no better, no more tragic nor funny, than the worn-out routines that the circus performers do day in, day out, failing to see--or perhaps refusing to admit--how out of touch with reality they really are. Granted, with clowns, that is kind of the point, and perhaps Rivette is attempting to do the same with the action here, but it doesn't work. It's a formalist exercise that is about being an exercise.

Sergio Castellito's character is not really a character at all. Rather, he is a false device. He exists only to drive the story, because he couldn't truly exist in any other capacity. There is no reason for him to be where he is, no reason for him to go anywhere else, and his explanation that he must always move in order to keep moving, is indicative of how self-involved the narrative really is. Castellito plays him with all the investment of a homeless man looking at yesterday's stock prices.

What he is meant to be is a sounding board for the others to bounce their secrets off of. Any reluctance they have will be worn away by his persistence. What eventually comes to light is that Kate has only recently returned to the circus, having left years ago following an accident, abandoning her father and her sister. Daddy is dead, but sis (Hélène de Vallombreuse) and Kate's niece (Julie-Marie Parmentier) are still there. This reunion has been a long time coming. Birkin plays the role with little enthusiasm, though the part is written without much depth or insight, so one can hardly blame her. Kate's "malady," as she calls it, is given only the most shallow of attention, and the cure Vittorio invents is overly simplistic and delivered without feeling.

It crossed my mind that Vittorio is intended to be a clown. He eventually plays one, and maybe if I knew more about traditional circus constructs, Around a Small Mountain would make sense. He certainly wanders into each scenario and stirs up trouble, a solemn trickster disturbing the stew. Perhaps Rivette is toying with known stories and known tropes. I don't think that would really matter. To my mind, Rivette would still be making a film for the initiated, expecting your passport to already have a stamp, in love with his own artistic powers and ineffective to communicate further than that. 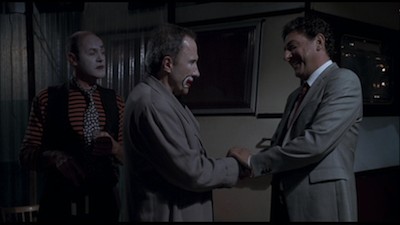 Video:
The 16 X 9 anamorphic transfer is fairly good, though it does have some minor haziness and edge enhancement. Colors appear natural, with a muted palette that is accurately represented, and dark scenes also come off well, with the blacks appearing solid and without inky patterns.

Sound:
The original French audio is offered in both Dolby 5.1 and standard stereo. A quick sampling between the two reveals that the 5.1 is more boisterous, and prolonged listening to the main track further reveals that it is a decent mix, with some minor ambient detail and an overall excellent clarity of tone.

Optional English subtitles are rendered well and flow at a nice speed, though at times they seemed a little clumsy, with the occasional oddly chosen word or even sometimes appearing to be slightly off in translation from what I could hear for myself.

Extras:
The lead bonus feature is an audio commentary by film scholar Chris Fujiwara, and it's a thorough, inviting audio track. Fujiwara knows his way around Rivette and can explain the director's oeuvre quite well. For those looking for greater insight into the movie, for the many who probably liked Around a Small Mountain, you will find much to enhance your viewing in this. Should we pass in the hall, we can nod to each other, content in our own opinions, free to go on our way. (Note: I write my reviews before I explore the extras, so my interpretation remains my own, just as Fujiwara's is his and, well, yours is yours. Rivette will likely survive my ire.) One complaint: there are pauses in the track, as Fujiwara stops to let us watch, and when he stops talking, there is no audio at all. The movie soundtrack vanishes.

Jane Birkin is interviewed (8 mins., 36 seconds) in English, and she talks about her first meeting with Jacques Rivette and his off-the-cuff working methods. 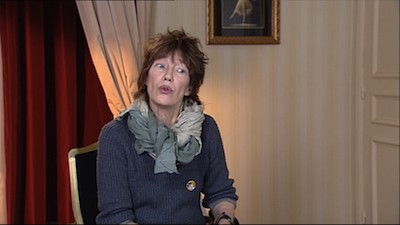 There is also a trailer for the film, and more trailers for Cinema Guild releases. The DVD comes packaged in a standard DVD case with an accompanying booklet featuring an essay by Film Quarterly editor Rob White.

FINAL THOUGHTS:
Skip It. Look, I know. This review is likely to piss people off, but you've gotta understand, I'm pissed off, too. This film bugged me, it bored me, and it made me feel condescended to. Cinema is a passionate art, and sometimes it inspires passionate responses. Jacques Rivette has his fans, and I am sure your response to my attempted takedown of what could be perceived as a sacred cow will likewise be passionate. Go for it! If you liked Around a Small Mountain, at least one of us got something out of it. I found it to be shallow posturing masquerading as emotional art, a love story without love and a psychological fable that barely poked beneath the surface. It is filmed and performed with a minimum of engagement, and I can't stand that it asked me to give more than it was willing to give in return. I love A.O. Scott's quote on the DVD cover: "As transporting and graceful as a ride in a balloon." It's a good line, and it makes sense even to me, so if you like Mr. Scott's work (which I do), and you are inclined to trust his opinions, you may still give it a rental; for me, that balloon is full of hot air. 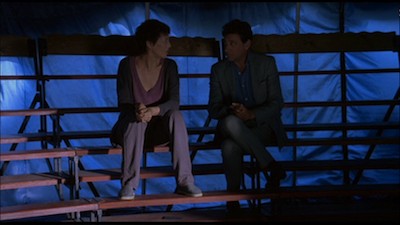