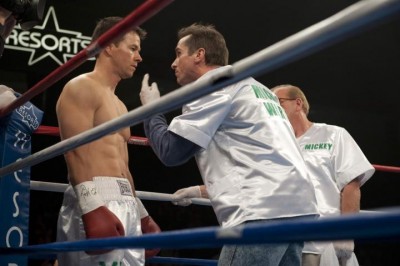 There isn't a moment in The Fighter that you haven't seen before. This is not a jab--this is fact. The story of the aging boxer taking his last shot, torn between his loyalty to his troubled Boston family and his love for a good woman, is filled with echoes of other films, better and worse: the Rocky movies, The Wrestler, Cinderella Man, The Champ, The Hammer, Good Will Hunting. Those echoes surround the picture, and sometimes threaten to envelop it; they make it easy to shrug off as an also-ran, a cliché. And, in a macro-cinematic sense, perhaps it is.

But let's not dismiss it that casually, because the fact of the matter is, on a micro-cinematic level, The Fighter plays. It works, on a moment-to-moment and scene-to-scene basis, pulling its audience in to its oft-told (though true) story. It is indisputably involving. And an argument could be made that the familiarity of the basic arc actually plays to the picture's favor. Freed from any real suspense about the story and its outcome, we're able to focus on what is fresh and new--the casual style, the lived-in atmosphere, and (above all) the force of the performances. The three key actors (Mark Wahlberg, Christian Bale, and Amy Adams) and the director (David O. Russell) are like jazz musicians here, starting with familiar themes and then blasting off into improvisations and variations that make the old into new.

In an energetic opening sequence, we meet Mickey Ward (Wahlberg) and his big brother Dicky Eklund (Bale). Dicky was a fine boxer in his day--he held his own in the ring against Sugar Ray Leonard (as he'll tell anyone who'll listen). Now he's training Mickey, who's a good enough fighter, but keeps squaring off against mismatched opponents, getting used as a "stepping stone" by other, more promising fighters. Mickey's hamstrung by his family ties; his mother Alice (Melissa Leo, barely recognizable) is proving an unreliable manager, and Dicky's addiction to crack is occupying a bit more of his attention than Mickey's training.

Things start to change when he meets Charlene (Adams), a college dropout who catches his eye behind the counter of a local bar. Their initial encounter is the picture's first great scene--there's a real spark between them, and it's not just physical (Adams is sexy here, but not over the top; in a nice touch, her halter top accentuates her tiny extra bit of baby fat). Russell gives the scene the space to breathe, to find its own way, and brilliantly holds on her face during a large chunk of Wahlberg's dialogue, so you can see her slowly softening to him. By making that unusual choice for just a few seconds, Russell ensures that we're with them the rest of the way.

Adams is the film's sparkplug, but the revelatory performance is Bale's. He completely immerses himself into the role of strung-out, over-confident Dicky, nailing a twitchy physicality and slurred, specific dialect, but more than that, a fundamental emptiness and pain. It's a bottomless piece of work; you can't find him in it anywhere. At times, it is uncomfortable to watch him--there's something happening in his performance that is so personal and private, you want to avert your eyes. But you can't.

Against these forces of nature, Wahlberg wisely underplays; he can't push harder than the actors who surround him, so he lies back, and when he raises his voice, it rattles. His line readings are simple and direct (witness the pained ways he tells Dicky, "I don't know what else to say"), and shatteringly effective. He's been readying to this part for years, training and nurturing the project (he's credited as a producer), hanging on through false starts with other directors before making it happen with Russell.

This is the filmmaker and the star's third collaboration, after Three Kings and I Heart Huckabees, and it's a surprisingly safe film for a director so prone to cinematic subversion. He doesn't really look to shake up the genre, as he has in earlier pictures, perhaps due to his status here as a hired gun, perhaps due to the hits his reputation has taken over the last few years (thanks to abandoned projects and stories--and tapes--of on-set tantrums). It would have been interesting to see what he would have done if he hadn't played it safe, if his storytelling had the danger of Bale's performance. But within the confines of the material, he strives for atmosphere; the neighborhood scenes have a rough, improvisational quality, an unpredictability that is missing from the story's inevitable arc.

That said, the film could do with quite a bit less of his brood of braying sisters (a little of them goes a long way), and of Leo, who is not immune from occasional bouts of overacting. And not all of his stylistic contrivances work; the decision to shoot the televised fight scenes on hard, ugly, unforgiving video precludes much in the way of artistry--they end up leaning solely on the power of the fights. Luckily, they're pretty thrilling. By the time the inevitable comeback begins, we've stopped playing cinematic etymology; we've succumbed to the narrative. These things happen. Sometimes we go to the movies to be surprised, to be shocked, to be thrilled. And sometimes we go to marvel at the skill of the performance, to see a new angle on familiar material, and to see if that material still has the power to move us. In The Fighter, it does.