"Tron, what happened to you?" 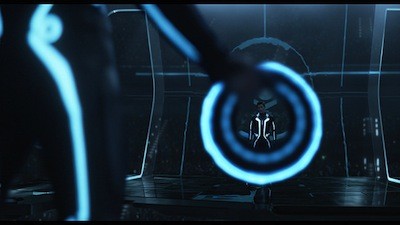 The good news is, Tron: Legacy is no more boring than the first one. It's a movie with lots of technical wizardry, but only a passable script. The bad new is, this one has a cynical internal drive that the original 1982 movie never did. For al of its faults, and even if its tale of users and programs seems quaint in today's high-tech world, at least the people who made the first Tron had a genuine creative impulse that they followed with absolute enthusiasm. The faceless entities who bring you the sequel only have marketing in mind, and they have crassly designed this movie down to every sellable detail, hoping to convince you that it is exactly what you remember its predecessor to be. Even its tin-can, "all-you-need-is-family" heart is meant to make us think that even if the world has gotten more advanced, at our core, we're still just people. Yeah, uh-huh. People with wallets.

Tron: Legacy begins with a poorly directed catch-up sequence. What has happened to expert computer programmer Kevin Flynn since the end of the last movie? Well, turns out he had a son, the boy's mother went the way of all Disney mothers and kicked the bucket, and then single dad Kevin disappeared from the face of the Earth, leaving his offspring the most lucrative corporation on the planet. That was 1989, a time when TVs inexplicably lived all by themselves in empty rooms playing bad news feeds. Jump ahead to 2010, and the little boy, Sam Flynn, has grown up to be Garrett Hedlund from the Friday Night Lights movie. You think he'd have grown up to be Sam Worthington, but I guess Worthington's agent forgot to charge his cell phone that day and so the part went to another generic hunk with no personality.

Anyway, Sam went and bought himself a leather jacket and a Ducati motorcycle that has a special feature where the logo on its fuel tank always faces any camera in the immediately vicinity. This is symbolism: all this dangerous stuff tells us that Sam has chosen to be a rebel rather than take over his daddy's business, but he's not afraid to reap the commercial rewards. The prince has left Encom to corporate raiders who only want to make money rather than connect the world, which was Kevin Flynn's kingly dream.

Cutting to the chase: Sam needs a wake-up call. That call turns out to be a page, one that comes to a pager sent to Kevin's old partner (Bruce Boxleitner, reprising his role from the first film). Check this, though, the page came from a phone that has been disconnected for 20 years. Whoa! The ghost is calling from inside the old Flynn Arcade! Sam goes to check it out, finds his dad's secret lair without even trying, and gets himself transported to the Grid, an unknown electronic world that sounds a whole lot like the internet. It's not, though, it's the creation of Kevin Flynn, Tron, and Kevin's avatar, Clu. Clu and Kevin are both played by Jeff Bridges, with the former being a freaky computer composite of the Dude as he looked in 1982. They motion captured Bridges playing the part now and then used digital effects to make him look younger. The result is awful, more Robert Zemeckis than James Cameron. Remember how we all saw those trailers last summer and assumed they'd fix the distracting rubber lips on Digital Jeff Bridges so his mouth would match his words? Guess what, they didn't! 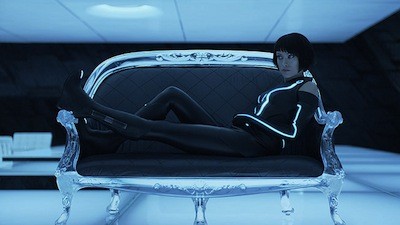 On the other side, Sam discovers an insular, unhappy neon world where Clu rules by fear. He forces the people there, who are called Programs, to submit to his will and fight in gladiatorial games--the same Frisbee fighting and bike racing that sold thousands of video games once upon a time. Sam is put in the arena, exposed as a Programmer (User) rather than a Program, and then rescued by a mysterious but totally badass girl named Quorra (Olivia Wilde, one of the few bright spots in the movie). She takes the son to his father, who is living as Obi Wan Kenobi outside the Grid. Dad is locked in a stalemate with Clu, biding his time until the Programs revolt. He also sometimes makes with the funny by busting out the California surfer lingo. Those are the only times levity gets inserted into this dreary affair.

Tron: Legacy fails on almost every level. The scripting is tedious, the action is stiff and choppy, and the world that Lost-writers Edward Kitsis and Adam Horowitz and first-time director Joseph Kosinski retrofit and re-create lacks any innovation or interior logic. You're probably expecting the Grid in Tron: Legacy to reflect new technology, the growth of the world wide web, nanobots, even maybe make a joke about spam e-mail--but you'd be wrong. Everything may be a little more shiny, but it's just a series of tubes with no connection to the flesh-and-blood universe. Kevin Flynn doesn't know what has happened in computers in the last two decades, and the system has survived only be perpetuating the same old codes. Sure, they've upgraded the designs of their outfits, but even that is indicative of what is wrong with Tron: Legacy. In the first film, the character designs managed to be both semi-organic and yet totally otherworldly; in Legacy, they've been designed to sell toys and motorcycles. For real, not just in the abstract. A lot of Clu's guards and gladiators could easily blend in with all those mid-life crises you regularly see racing down the highway on their crotch rockets. There is nothing special about this brave old world, and after about ten minutes, it grows achingly dull to look at. I would have been more than happy with two hours of glow-stick people beating the light bulbs out of each other, but the camera is so all over the place, the editing so chaotic, and the speed-up/slow-down so haphazard, I was too busy trying to figure out what the hell was going on to enjoy the ride. Even with the benefit of 3-D, Legacy has nothing on Tron, which was fun to look at even when the story was putting you to sleep. Once the third dimension stops inducing vertigo, it's just another off-key yawn in the chorus of suck.

Don't misunderstand me. I'm not one who buys into that whole "they are destroying my childhood jazz." (Though, if you are, you should know that Joseph Kosinski's next job is remaking another Disney sci-fi "classic" from your childhood, The Black Hole. You crying now, little boy?) If the original Tron was part of your childhood, you grew up in a time when our entertainment was already nothing but a commodity. There was nothing pure about G.I. Joe or Transformers, they were just elaborate commercials, don't kid yourself otherwise. Accepting that, credit where it's due, at least those people put some effort into fooling us into thinking we were getting something genuine. The bean counters who made Tron: Legacy have no time for such illusions. The whole movie is set up to introduce us to new products, whether it be that keen flying machine that will make an awesome toy or the new set-piece that will look amazing in a video game or even sticking the guys from Daft Punk in the night club scene so we remember to buy the soundtrack. (And, again, credit where it's due: the soundtrack works like a charm; it's one aspect of this fumbling juggernaut that actually succeeds). There is no goal for the "people" in this movie, no function beyond simply functioning. It's not even about the interactive relationship of computers and their users anymore. That would actually require a little thought.

It's not that I think the makers of Tron: Legacy have defiled holy ground; it's that they know how unholy it is and they think we'll be too busy swiping our debit cards and typing in our PINs to notice. The Disney Corp has even inserted some insidious subtext into the proceedings. Look at Legacy a certain way, and Clu could be seen to represent information that wants to be free, that wants to break through the walls imposed on his system by big business. But Clu is also the bad guy, and in the end, when Sam heads home to take back the family corporation, we're supposed to feel safe and secure knowing the handsome white man is going to make sure everything stays exactly where the moneymen want it to be. The fact that Clu has turned into the same oppressor he despises is just camouflage. Start picking it apart, see what you find.

I'd like to think the smokescreen doesn't work. I'd like to believe that the cold calculation that gave birth to this snoozer will be obvious to all. I guess I'll have to wait to see the box office receipts to find out. But you know what, forget all that. Don't skip Tron: Legacy because of my theories about what went into it. Do yourself a favor and just skip it because it's not very good. There are better movies to spend your money on. Sit at home and listen to the soundtrack and imagine the ideal Tron: Legacy you'd like to see and save the ticket price. I guarantee your version will be ten times better than the one they actually made. 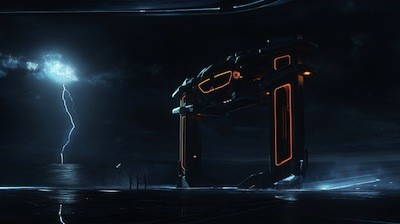