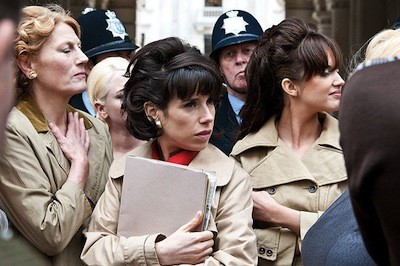 In May 1968, the 187 women who sewed and assembled the interior upholstery in the machinist shop of the Ford auto factory in Dagenham, England, walked off the job for 24 hours to protest their pay grade and ranking being demoted to that of "unskilled labor." When management failed to respond satisfactorily, the women upgraded their complaint to a demand of salaries equal to their male counterparts, and led by one of their own, a wife and mother of two named Rita O'Grady, staged a full-scale strike. It was an unheard-of move, women didn't strike. Ford expected the ladies to cave in; they didn't, and the entire factory ground to a halt when the company ran out of finished seats for their vehicles.

Made in Dagenham is the movie version of this story. It is written by TV veteran William Ivory, directed by Nigel Cole (Calendar Girls), and it stars Sally Hawkins (Happy-Go-Lucky) as Rita, the woman who unexpectedly found herself at the center of a cause. The film is at once funny, provocative, and inspiring, with even a few pauses for tears along the way. It's a wonderful surprise, a feel-good movie you don't have to feel bad about liking.

The story opens on a sweltering day. The manager of the machinist section, Albert Passingham (Bob Hoskins), a former soldier, goes to his crew to tell them that Ford is preparing to let a deadline on their grievance pass. The group of workers represents various generations and interests, from the young girl with the miniskirts and the Twiggy haircut all the way up to the older women likely nearing retirement. For as different as they are, however, they are a unit, and they vote unanimously to strike. Knowing there is strength in numbers, Passingham convinces Rita to go along with him to see the higher-ups. His faith in her wits proves justified when Rita stands up for her sisters, refusing to accept a patronizing deal. From there, things snowball. Ford gets so upset, they send a corporate killer (The West Wing's Richard Schiff) from America to squash the uprising, and even the government gets involved. The Secretary of State, Barbara Castle (Miranda Richardson), is instructed to make nice, but she has her work cut out for her.

Ivory builds his screenplay around the auto strike, but his script isn't just about the battle between workers, unions, and management, he spreads out to explore how the changing times effect the women who get caught up in the movement. The gender politics spill into the home, putting a strain on marriages, especially when the husbands get laid off. Rita's spouse (Daniel Mays) discovers he is ill-equipped to run the household in her absence, and her closest work ally (Geraldine James) finds it hard to fight the good fight when her husband (Roger Lloyd-Pack) is suffering from the increasingly crippling aftershocks of his service in World War II. Obstacles are everywhere, and not everyone understands why the women are prepared to go all the way with their petition--or even believe that they should. 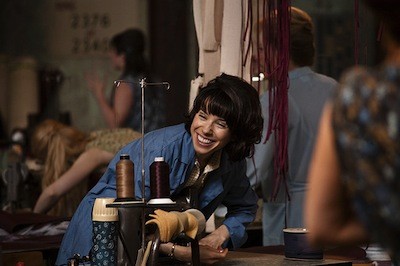 Made in Dagenham is a good movie on its own, but it's one that is made great by the smart casting of Sally Hawkins. The actress is an intriguing screen personality. She has a quirky, almost shy manner, one that would seemingly be at odds with the activist figure she is playing, but that works well in underlining the transformation and emerging confidence. The Rita at the end of the film has come a long way from the Rita at the beginning. Hawkins can light up even the most gloomy screens--she was easily the most memorable part of Never Let Me Go--and she carries what might have otherwise been a far more conventional movie to a whole other place.

The supporting cast is also amazing, with many of the actors getting their own room to shine. Bob Hoskins is adorable as Passingham, and his motivational speeches to Rita serve to rally the audience, as well. Miranda Richardson is fantastic as Barbara Castle, who has to work against the old boy's network in her own way. An Education's Rosamund Pike also leaves a lasting impression as the wife of one of the Ford executives trying to shut the strike down. It almost seems wrong to single any of these people out, the ensemble is so good. Schiff, Mays, James, Andrea Riseborough, and Jaime Winstone also stand out in their roles. They are helped to pull off an effective period drama by the excellent wardrobe, and they are also bolstered by an awesome soundtrack. Desmond Dekker, the Small Faces, Sandie Shaw--whoever picked the music has great taste.

It would have been easy for Made in Dagenham to blow it by being too little or too much. The film could have undersold the character elements by trying to cram in all the facts, or it could have turned out sappy and manipulative by making it all too glossy. Instead, the movie manages to be moving in all the right ways. I felt fired up after seeing it. The stand Rita and her co-workers took turned the tide for women in the workplace, leading to new legislation and reformed labor practices. Though the clips from new interviews at the end don't identify who is who, you can see the humor and the fighting spirit in the women that were there even to this day. Extraordinary people can come from the most ordinary places, and theirs is a story that deserves to be told--and seen. If Made in Dagenham is playing a theatre near you, get down there as soon as you can. 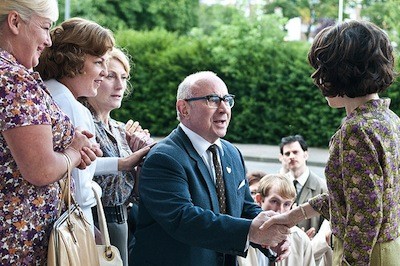