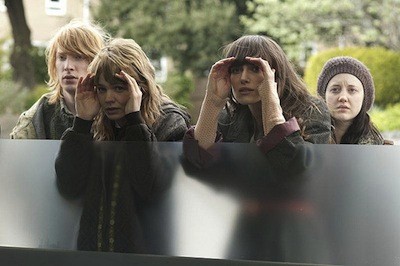 It's like a childhood fantasy infected with a pervasive nightmare. What if you could go to a school where it's just you and a bunch of other kids, no parents to speak of, far from the rest of the world? Fun and freedom is sure to ensue. But what if also you weren't able to leave the school grounds for fear of a violent death, which wouldn't even seem so bad if you knew that an early death was all that awaits you anyway? For the kids in Never Let Me Go, life is just a short treadmill to the organ farm. Once they are of age, they will become "donors," and their bodies will be parceled out to regular citizens in need. Most will give up two or three organs, depending on how many operations they manage to survive. In the meantime, they will be given a semblance of a life. The existence gene has been isolated.

Never Let Me Go is the celebrated adaptation of the equally celebrated novel by Kazuo Ishiguro (The Remains of the Day). The script is by Alex Garland, a novelist (The Beach) in his own right, and the movie is directed by Mark Romanek, whose music videos and commercials have earned him quite a reputation, one that exceeds his previous feature film One Hour Photo. (Rent 2005's compilation The Work of Director Mark Romanek instead.) There are few films outside of Inception and Scott Pilgrim that were awaited with as much anticipation by people I know than this one. For weeks I've been getting queries about when they were screening Never Let Me Go and who would be my "date." Great, now I get to be the asshole at the party who has to tell them all that it's actually kind of disappointing.

The film is set in the mid-1990s. We are introduced to Kathy (Carey Mulligan, An Education), a 28-year-old woman working as a "carer." As we will come to find out, this is the term given to the clones who aid other clones through their donation process. Or, I assume they are clones, it's not full explained. The kids refer to their "originals," regular people who they will be able to identify because they look just like them; then again, wouldn't there be duplicates amongst the donor population? So many unanswered questions. And, no, these aren't spoilers. Though Never Let Me Go's marketing campaign has cultivated some mystery around what is actually going on, I think that's more because the studio just didn't know how to explain it to you succinctly. It's not like there are any "Dun-dun-dun! You're not real!" revelations.

Then again, maybe Never Let Me Go could have used some. Instead, it presents us with an underdeveloped, underexplained world that is highly intriguing yet somehow not satisfying. I applaud Romanek and Garland's choice to never show us the outside society that creates these doomed creatures. Keeping them isolated and decidedly "other" gives the movie a persistently weird atmosphere, one aided by Adam Kimmel's gorgeous cinematography even as it's undercut by Rachel Portman's cloying musical orchestration. There is a push and pull here between the progressive and the average, possibly consciously so, in keeping with Ishiguro's themes. Or more likely Portman's score is a symptom of the self-conscious self-importance. Romanek is trying to make a sci-fi Merchant Ivory film but with a minimum of sci-fi--even though instead of settling on an anemic yet somehow overlong 103 minutes, another 20 minutes could have meant having both.

Anyway, back to the story. Kathy grew up at Hailsham, one of the more liberal children's homes, and in flashback, we see young versions of herself (Isobel Meikle-Small), Tommy (Charlie Rowe), and Ruth (Ella Purnell) entering in a triangle that will last the short span of their lives. Kathy is the empathetic one, Tommy is confused and full of rage, and Ruth is the schemer. It's not long after a rogue teacher (Sally Hawkins, Happy-Go-Lucky) blows the children's minds by telling them why they exist that Ruth makes a bid for Tommy, stealing him away from Kathy, even though it's clear they were meant for each other. In one of the movie's sweeter moments, the boy gifts Kathy with a cassette tape he bought at the school's low-rent second-hand bazaar. It's of an old torch singer singing Luthor Dixon's "Never Let Me Go," which becomes the haunting theme of their romance. Tommy lets her go, but Kathy never lets go of him. 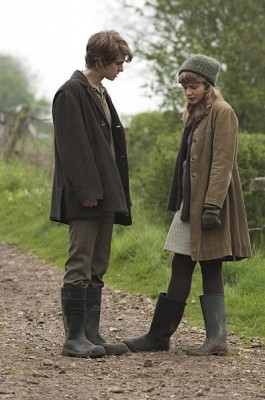 The rest of the movie follows the trio through the next two stages of development: the halfway home that helps them assimilate to the real world, and then the sour hospital existence of the donors. Tommy grows up to be a tortured and twitchy young man (played by Andrew Garfield of the Red Riding Trilogy and The Social Network), and the scheming Ruth (Keira Knightley, Atonement) sheds her uneasiness at being the seductress to become sallow and contrite. Small dreams are had and dashed, a few lessons are learned, and we wait for romance to bloom again. I assume we are meant to have hope for their futures, but the movie does its best to remain hopeless. Like Ishiguro's characters in Remains of the Day, these kids are cut off from their emotions because society never trained them to give in to their impulses. In James Ivory's cinematic version of that novel, the director made sure that, despite the restrained passions of his protagonists, the audience was passionate about them; this is a trick Romanek fails to pull in Never Let Me Go. No one here is passionate about anything.

So, then, what are the fumes that Romanek's film gets by on? As mentioned, there is Kimmel's photography. The man who shot Capote makes the same use of desolate and dreary landscapes here, teasing a remarkable beauty out of the gloom. Then there are Carey Mulligan's tears, which drizzle like a sugary glaze on the donut of her face. She doesn't get to do much in Never Let Me Go, but she's always present, always the good friend who is listening. Garfield is also solid, harnessing the strange energy of the kooky child who never finds his place. Hawkins shines in her all-too-brief role, and Knightley makes a valiant go of a nothing part. She is better when she is being conniving and slightly evil; too bad most of that went to the younger version of Ruth.

I was also fascinated enough by the strange alternate reality that Never Let Me Go creates, it kept me interested even when the lack of deep characters did not. If I was bored by the sad faces on the screen, I could look around and hope to spot some small touch of this distant world. It didn't distract me from some of the things that never made sense--why don't the kids run? does anyone ever kill himself?--but it kept me watching. Despite all the things that nagged at me, I still cared where it all went. I know that isn't a hearty recommendation, but Never Let Me Go doesn't exactly inspire a hearty reaction. It drifts by, content with the breeze it creates, waiting out its short, manufactured lifespan like one of the manufactured people it depicts. It's like, "Close, but no cigar...so how about a cigarillo?"