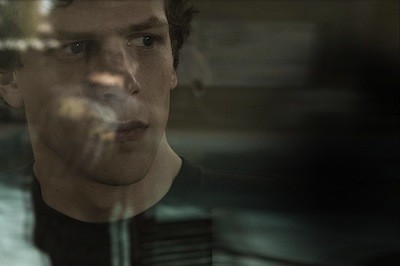 Moral of the story: nerds don't get rich and successful because they are really smart, but because they know how to hold a grudge.

The idea seemed ludicrous when first announced. West Wing-creator Aaron Sorkin was writing a script about Facebook, and David Fincher (Zodiac) was going to direct. Jokes about status updates and "it's complicated" soon followed--words many folks are now going to have to eat. The movie that came out of all that, The Social Network, pulls off the impossible and makes the story of building an internet empire into one of 2010's most riveting films.

Based on a book by Ben Mezrich, The Social Network tells us how one angry college student turned getting dumped into a pervasive cultural touchstone. No, it's not really that simple...except it kind of is. Jesse Eisenberg (Zombieland) plays Mark Zuckerberg, a junior at Harvard who took getting jilted especially hard. After venting on Live Journal, as the impotent often do (I'm a blogger, so trust me, I know), Zuckerberg decided to get his revenge by hacking the web directories of all the university's clubs and posting the pictures of their female members online for other students to rate. 22,000 hits later, Harvard's net server crashed, and Zuckerberg was in trouble with the school and hated by all the co-eds, but he also caught the eye of some student financiers with an idea for a Harvard-only interaction site.

What flowed from there is up to debate--and litigation. Zuckerberg roped in his friend Eduardo Saverin (Andrew Garfield, Never Let Me Go) as the chief financial officer for "The Facebook," his version of a networking site. He never told Eduardo about the other guys, however, and future-Olympiads Cameron and Tyler Winklevoss (Armie Hammer, seamlessly playing the twins) and their partner, Divya Narendra (Max Minghella, Agora), naturally want their stake in what they believe to be their concept. And this is before Facebook went national, much less international. 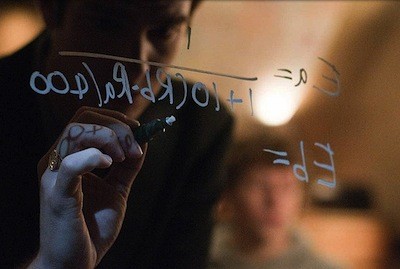 The Social Network is deftly constructed as a whirlwind of depositions and flashbacks, as the parties involved tell their versions of events. Propelled by Sorkin's whip-smart dialogue, Fincher cuts back and forth at a rapid-fire pace, leading audiences through a complicated tale of manipulation and obfuscation that progresses into high stakes at an alarming rate. Before anyone even has a handle on what is really happening, one of the founders of Napster, Sean Parker (Justin Timberlake), swoops in and starts stirring the pot. Venture capitalists dump money into the idea, and soon tech geeks are partying like rock stars. At the core of all this trading and coding is also a story about friendship and the irony of social interaction in the 21st century: a man who had zero facility for dealing with his fellow human beings face to face created a global service ensuring that no one need ever look each other in the eye ever again.

Mark Zuckerberg, at least as portrayed here, is a fascinating character. An intellectual powerhouse, he is able to think along several different lines at once. Indeed, The Social Network's storytelling mimics his thought processes; within one conversation, he will carry on several threads simultaneously, returning to earlier bits of information, his processors criss-crossing while whomever he is talking to just tries to keep up. His brain is like a web browser with multiple windows open, all of them downloading data. He has little patience for others, and seemingly no skill at navigating everyday interaction. Yet, the picture of Zuckerberg painted by those he screwed over, including his one true ally Eduardo Saverin, reveals a far more cunning player. Could Zuckerberg have been the puppeteer all along? It's impossible to say, and so The Social Network avoids claiming so outright. They even toss out a mea culpa. One of the attorneys on Zuckerberg's case (Rashida Jones, I Love You Man) explains to him why he would never win in a jury trial: all it takes is the suggestion of impropriety, the shoe fits too well. 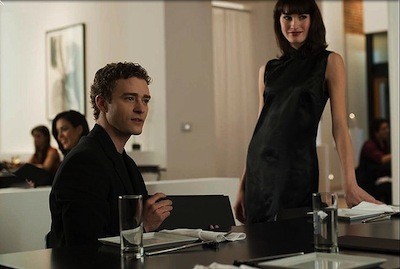 From The Squid and the Whale through Adventureland, Jesse Eisenberg is one of those actors whose distinctive manner earns him a little typecasting and regular accusations of "just playing himself." To say that is happening again is to ignore the level of craft he brings to his portrayal of Zuckerberg. Eisenberg is focused like a laser, and his line delivery has a machine-gun rhythm. He seems to instinctively understand the computer mogul's inherent firewall, and at some of the film's more insightful moments, Eisenberg is able to suggest that perhaps it's a firewall that Zuckerberg is as incapable of coming out from behind as outsiders are incapable of penetrating from the front. It's a carefully crafted performance, one that deserves major praise.

Also good is Andrew Garfield, who gives us more of the confident swagger from Red Riding Hood 1977 and less of the awkward schoolboy routine that got him cast as Peter Parker in the next Spider-Man film. His Eduardo Saverin is confident and poised, but also genuine. If there is anyone you feel sorry for in The Social Network, it's him. He brings the movie its emotional climax. He also really makes you hate Justin Timberlake--no mean feat!

As I sit and process The Social Network, I find nothing to complain about. Top to bottom, this artfully constructed movie somehow gets everything right. Jeff Cronenweth's slick yet unobtrusive camerawork makes everything look good while avoiding making it look too flash; the editing by Kirk Baxter and Angus Wall keeps the story moving without sacrificing clarity; even the music by Nine Inch Nails-frontman Trent Reznor and composer Atticus Ross (The Book of Eli) enhances what is happening, serving as an integral component of the finished product but never overshadowing what we are seeing. Fincher knows how to hold back, masterfully controlling what information slips through when. There is never time to pause or grow bored with The Social Network, and the way it all plays out is so exhilarating, you never want to take a breath anyway. You'd be awful sorry if you missed something on the inhale.

As we slip into autumn, The Social Network couldn't be further away from the best movies of the summer in terms of style and content. Where Inception and Scott Pilgrim dazzled with special effects and mind-bending narratives, The Social Network plays a far more restrained game. Yet, it somehow comes out as no less exciting. It's easily as impressive as either of those two movies, and it jumps to the head of the pack as one of the best films you're going to see this year. 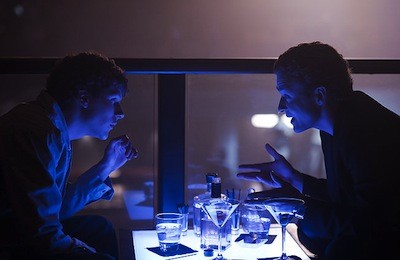