Book of Eli, The 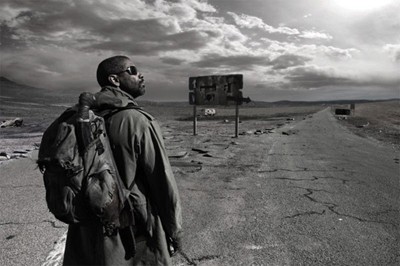 You think you've got it bad from global warming. In the future as depicted in The Book of Eli, a war of some magnitude ripped a hole in the sky and exposed the people below to the Sun's rays. Civilization has collapsed, and chapstick and designer sunglasses have become a new commodity. Whatever caused the war, what politics or science went into this, it doesn't matter. It's been thirty years since the Great Flash, and people have long since forgotten the hysteria that followed. Cannibalism, road bandits, and clean water are a bigger concern than what happened.

That is, unless you're Eli (Denzel Washington). Eli is a righteous man on a warrior's path. He remembers that following the catastrophe, when people were looking for something to blame, religion became one of the scapegoats. Bibles were burned, their contents since forgotten by all but the very old--of which Eli is one. He has in his backpack what may be the last Bible in existence, and he's walking across the United States, heading west on the path of faith. Along the way, he encounters many an obstacle, but none he can't handle until he comes upon a town that lives under the thumb of Carnegie (Gary Oldman), half-tyrant, half-business man. Carnegie has been searching for a Bible, knowing that religion is a tool he can use to become even more powerful. Eli's intention is to share the Word of God with his fellow citizens, but he knows Carnegie is not the way to do it.

The Book of Eli is the new film by Albert and Allen Hughes, directors of Menace II Society and From Hell. Though it's an original script written by first-time screenwriter Gary Whitta, the movie's hero walks his road in the shadow of another--namely, The Road. The Book of Eli is a little like the popcorn version of John Hillcoat's adaptation of Cormac McCarthy's post-apocalyptic novel. Perhaps it's the freshness of that movie, and the popularity and respect afforded McCarthy's book, that will make The Road so prevalent in any evaluation of the Hughes Bros. movie. Some of the echoes are uncanny, from story points like the house full of cannibals to some of the visuals. Denzel Washington walking across a deserted highway overpass, the gray pallor that hangs in the air--I am sure these are just coincidences. Eli is a distant relation of Viggo Mortensen's struggling father, a man dedicated to a singular vision, saying very little, reluctant to tell anyone his name. Only here we trade the whiny son for a cute girl.

For all the similarities, The Book of Eli is its own animal (and not just because it lifts part of its finale from Children of Men). Though still quiet and downbeat, it swings more for the fences. The action scenes here are dramatic and thrilling, with the best sequences being when Denzel takes on his foes using only a knife or sword. The first burst of violence is shot entirely in silhouette, and it's breathtaking. The fighters move quickly, but their moves are smooth and easy to follow. Carnegie also gives us a great villain to root against. He is as loquacious as Eli is taciturn. Gary Oldman is in full bad-guy mode here, reminding us of other big-mouthed crooks he played in movies like The Professional. One can sense that the actor is very near boiling over through much of the movie, but he regularly bites back on the impulse, teasing out a little more menace before exploding in that way only Gary Oldman can. It's hammy, but a tasty kind of ham. 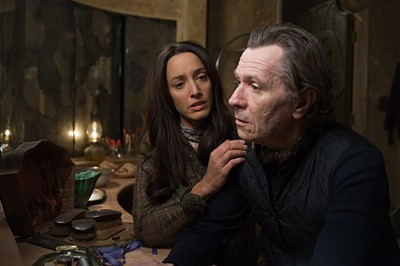 Carnegie is the devil in the desert sent to tempt the holy man. Food, shelter, and comfort are refused by Eli, and so Carnegie offers him a woman. Solara (Mila Kunis) is an independent force in Carnegie's village, her freedom bought at the expense of her blind mother (Jennifer Beals). (Many went blind following the war, either as a direct result of the Flash or due to the bright sunlight that came after.) Eli doesn't stray from his path, not ever. He didn't when he saw innocents being attacked, and so a little bedroom action isn't going to distract him, either. Yet, Solara, who was too young to be around when the apocalypse came, is distracted by him, drawn to what makes Eli different. She follows him when he leaves town. The downside is, Carnegie and his men aren't far behind.

Religion has an important role to play in The Book of Eli. It'll be interesting to see if Christian groups embrace this movie or if they get hung up on the fact that the sinners are actually sinning (they use the F-word!). The script treats the notion of faith with a healthy respect, even if it is implied that fundamentalist zealotry at least had some hand in the big war. Both Eli and Carnegie are men whose dogmatic adherence to their beliefs could result in further damage. Whether Carnegie sees Christianity as anything more than a tool is unclear, but there is little doubt as to what kind of religious leader he will be. Eli is a monastic man with true faith. Denzel Washington plays him with a stern stoicism, making him a variation on Clint Eastwood's iconic Man with No Name. He comes to town, he does what he must do, and he is seemingly untouchable.

Being untouchable is not a virtue, however, when you're a man who is supposed to spread the Gospel. Eli is so devoted to the mission, he sees little else, and the introduction of Solara is intended to inject a little humanity back into human salvation. It's not a particularly nuanced role, but Kunis's natural attitude, the kind of self-belief that she just might be too good for the men in her life that made her so appealing in Forgetting Sarah Marshall and Extract, also works for her here. Thankfully, the Hughes Bros. don't let her overdo it. Turn either hers or Oldman's performances up even just another notch, and it would have been like they were beamed in from another movie. 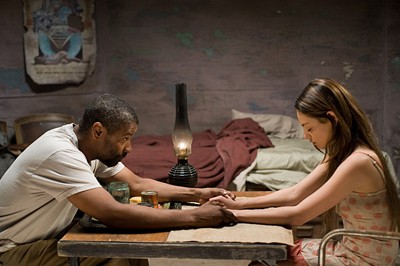 There is a lot to like in The Book of Eli. The Hughes Bros. and cinematographer Don Burgess (Spider-Man) make some fantastic moves with their camera, scrolling through action sequences like a bird trying not to get hit. They pull virtuoso visual stunts within the very real onscreen stunts that dazzle without overpowering what they are meant to convey. An extra ribbon should also be given to the sound design and the moody score by another first-timer, Atticus Ross. The filmmakers play with ambient noise in a way that adds a creepy tension to many scenes, emphasizing the otherworldliness of this situation. These things go a long way to helping it not be too unbearable when the film moves a little slow. Some sequences run too long, suggesting maybe the Hugheses were trying a little too hard to make The Book of Eli seem more serious than it should be.

I went into The Book of Eli expecting very little, but what I got was a perfectly respectable, entertaining action picture. While not exactly a great movie or a classic of the genre, nor even entirely original, it's still a treat to see a big budget shoot-'em-up that doesn't sacrifice its intelligence for the sake of special effects or gore. The Book of Eli has one of the best truck explosions I've seen in the last twelve months, yet no one had to lower their I.Q. to make the pyrotechnics happen. Imagine that? A movie that can be fun to watch without being bad for me.

Oh, and I'm totally down with The Book of Solara. You got Mila Kunis for sequels, right?