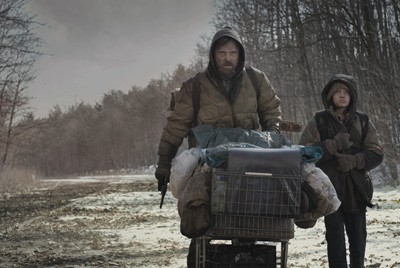 The Road should start with one of those old William Castle warnings before the picture, where director John Hillcoat steps onto the screen before the credits roll and suggests that the faint of heart take the opportunity to leave. The Road only has a few gut-clenching scenes of gore, but those are enough, and the warning should also indicate that the film is relentlessly downbeat.* Those who think all movies should have an uplifting message about overcoming and everyone getting along should maybe save their pennies to buy a ticket to that Sandra Bullock movie where she plays a Texas mom. That might be more your speed.

Adapted from a Cormac McCarthy novel by writer Joe Penhall, The Road is attempting to follow in the box office footsteps of No Country for Old Men, but No Country it is not (and nor does it need to be). Abstracted from any contemporary setting and only vaguely in a recognizable world, The Road concerns itself less with modern society's morality games and gets back to basics. I'm talking about primal questions of good and evil, the bonds of father and child, and the will to survive.

The movie is set in a post-apocalyptic future where the very earth has apparently given up and given over to decay. Nothing can grow, wild life has all but disappeared, and earthquakes and other natural disasters have destroyed any environmental balance. There is no explanation as to why this has happened, and we never see life before the big event, just a handful of flashbacks to a time after, when "The Man" (Viggo Mortensen) tried to get his wife (Charlize Theron) to hang on to hope for the sake of their infant son, a baby born shortly after things went bonkers. That boy, played by Kody Smit-McPhee, is now heading toward his tween years, and we can't be sure how long he and his father have been wandering alone, foraging for food and searching for the coast and a vague promise of escape.

John Hillicoat's last movie was the harsh, undervalued Australian western The Proposition. Both the unflinching nature of that film's violence and the disjointed storytelling style the director employed suit The Road, which is by nature episodic. The father and son head toward the ocean, and the movie finds them along the trail, chronicling the people and things they encounter there. Some of the times are good, such as when they find a fully stocked bomb shelter, but most of them are bad. They must avoid roving gangs, cannibals, and even earthquakes and falling trees. All along the way, the father must teach his son to maintain a base morality while also giving him the right skills to take care of himself, be it having a healthy distrust in his fellow man or even the proper way to end his own life. This is a kid who spent his first several years hiding out with his parents, who has never seen a rainbow or known food fresh out of the ground. Honestly, I would think he'd be a little tougher and not so whiny. His constant cries of "Papa! Papa!" can get a little annoying at times. It's a hard and dirty world they live in, and the boy, it seems, hasn't really adapted. 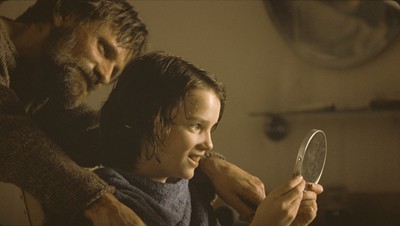 I have not read McCarthy's novel, so I can't really judge The Road as an adaptation. There are times where scenes seem anemic and where the specificity of small details in the surroundings suggest that maybe there was more to the happenings than what we see, that when stripped of the author's layered prose, we only have what the eye can behold. Penhall uses the father's narrative voiceover sparingly, giving us a hint of what he is thinking, but most of the gaps are left for the viewer to fill in. This means long stretches of the journey that feel kind of empty, as if we are biding our time until the next big threat. The narrative is constantly starting and stopping again. Some sequences work wonderfully--the harrowing discovery of a human farm, the boy's possible hallucination where he sees another child his age--and some end up being unfulfilling rest stops. A cameo by Robert Duvall, for instance, stands out as an obvious attempt to give some greater meaning here, to bring some of McCarthy's metaphysical philosophizing off the page and onto the screen. I wasn't really buying it.

Thankfully, in casting Viggo Mortensen as his lead, Hillcoat recruited some massive shoulders to bear the load. Even if what is happening isn't very interesting, the actor is always interesting to watch. His is a mind that appears to be constantly at work, and his performance undersells the degradation of body and mind that the character is undergoing. There is plenty of foreshadowing--a cough here, a limp there--but Mortensen never calls attention to it. He gets us from point A to point B without ever once making us realize he's stringing us along.

Hillcoat and cinematographer Javier Aguirresarobe (Vicky Cristina Barcelona, the Twilight series) also give us plenty to look at. Their apocalypse is a carefully manicured one. A gray pallor hangs over the abandoned houses and towns like ash, and there are stunning shots of crumbling highways and cities left in disrepair. Lend a careful ear to the audio, as well. Not only are we treated to the dark and lovely score composed by Nick Cave and Warren Ellis, but we can also hear the world decomposing around the man and his child. The trees and the dirt beneath their feet ache and moan. Death is an ongoing process.

In sifting through my thoughts about The Road, I find there is more in there that I liked than I disliked. While I wouldn't suggest that the film should be livelier, I suppose it could be tighter. Maybe less downtime, or even a little more order imposed on the chaos. I assume they did not depict every scene in the book, and maybe there was a way to arrange what they chose to show so that it had more impact. This could have been a road trip where the situations and the brutality escalated, leading to a more effective climax. Then again, I guess the point was that it went the opposite way, that the encounters got more personal, the choices got harder for the man and the boy. I don't know, whatever The Road is lacking is something I am having a hard time putting my finger on, and I suppose that's why I find it so haunting. I want to restore the civilization that has been destroyed, impose a narrative structure, but it's too late, there is just no way.

* This was written before I had seen Lars von Trier's Antichrist, hands down the harshest movie of 2009.