League: The Complete First Season, The 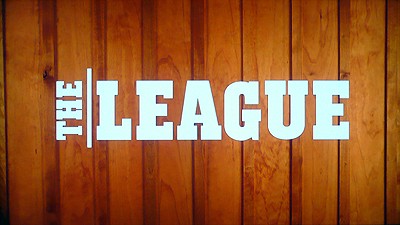 
The Show
The last thing I'd ever want to watch is a show about fantasy football. Seriously. I used to play fantasy hockey, but, like clockwork, two months into the season I'd forget to update my roster for about a week, and that would be the end of my involvement until the next year's draft. I just couldn't keep up my interest in pretend sports that I'm tangentially connected to. So when I heard about The League, a sitcom about a group of guys in a fantasy football league, you can expect that my interest was only a touch higher than my interest in getting kicked in the crotch repeatedly on my birthday.

However, when FX put the series on Hulu, I ended up giving it a shot, and found that, like my initial reaction to Community, I was completely off and was missing out on a brilliantly hilarious series. Fantasy football may be a large part of the series, to the point where the season uses the fantasy season for structure, uses the game for major plot points and even features real football stars in cameos, but you needn't know or care about such matters. Because at its core, the series is about a group of five friends who love to bust each other's balls, especially when it comes to the naive and self-important Andre (played to perfection by Paul Scheer.) There's nothing heartfelt or caring about their relationships, and the competition between them raises the stakes on the way they make fun of each other, the source of the vast majority of the series' comedy. 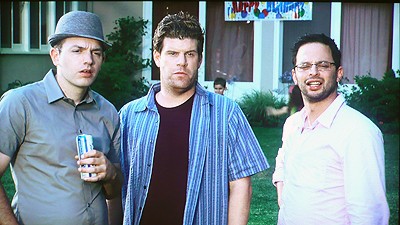 The Chicago-land pals come from varied backgrounds, with a pair of married-with-children lawyers (Kevin (Stephen Rannazzisi) and Ruxin (Nick Kroll)), a plastic surgeon (Andre), a divorced schlub (Pete (Mark Duplass)) and an odd, unemployed ladies man (Kevin's brother Taco (Jon Lajoie.)) As they play through their season, their worlds mix, giving them plenty of things to explore, including homemade porn, spa getaways, childhood phases and sexual slumps. Everything is played for irreverent laughs, especially Kevin's adorable daughter Ellie, who is at the center of some of the first season's biggest laughs, when her fascination with a singing and dancing doll ends up with Taco donning a costume, picking up a cleaver and running from the fuzz. The show also lives up to the FX pushing-the-envelope reputation, with the guys' insults and relationships leading to tons of filthy language and sexual situations.

The cast is hilarious in their partially-improvised performances, with Kroll and Scheer coming off the best, thanks in part to their characters, though Lajoie has the advantage of playing the goofiest, least reality-based part of the line-up. The guys are the focus, and do well in the roles, but there there are plenty of people around them to also provide laughs, including Kevin and Ruxin's wives. Jenny, Kevin's spouse (Katie Aseton), is actually one of the boys, with her dirty mouth and football knowledge. In fact, she fits in better with the guys than her husband, the league commissioner, and runs his team for him, a source of frustration for Kevin. On the other hand, Ruxin's wife Sofie (Nadine Velazquez) is very much a girly girl, and she has little patience for his non-familial hobbies and his sexual hunger, while acting as a human Viagra nearly every time she's on-screen. There are a couple of great cameos and guest stars as well, including Rob Heubel, Matt Walsh, Bobby Lee and Tom Lennon, wonderful as usual as an effeminate mediator.

If there's one thing about the series that doesn't quite work, and it's mainly because I'm not a fan of Seinfeld, it's the show's annoying habit of creating words and phrases for things, an element that screams of effort. Thus, we get terms like "man pants," "vaginal hubris" and "eskimo brothers" dropped like they are completely natural. The only people i know who do that are Seinfeld fans, and these guys don't seem like Seinfeld fans. But considering the show was created, written and directed by a producer and writer of that popular series, this is hardly shocking, and thankfully, once the moment passes, it doesn't affect the rest of the show. 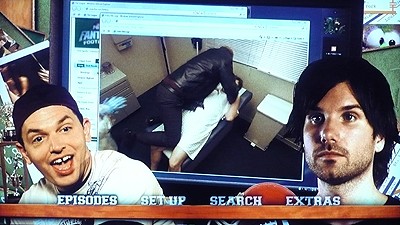 The Blu-Ray
The first season of The League arrives on a single Blu-Ray disc, which is packed in a standard B-R keepcase with a promotional insert for FX' shows. The disc features a well-designed animated, anamorphic widescreen menu (with a neat chalkboard design for the pop-ups) offering options to watch all the episodes, select shows, search chapters and bookmarks, adjust the set-up and check out the extras. There are no audio options, but subtitles are included in English SDH, Spanish and French.

The Quality
The 1.78:1 image (delivered with 1080p AVC-encoded transfers) looks fantastic, capturing the series' naturalistic look perfectly, with appropriate color (coming in strong, but not vivid) and a extremely high level of detail, showing off hair and fabrics clearly, though the show isn't always super sharp (a result of the filming.) If you can spot a problem though, be it dirt, damage or digital artifact, you're probably lying. Overall, a great presentation.

The Extras
Note: Unlike the episodes, the extras are presented via MPEG encoding.

The extras here are the same as those on the DVD, starting with extended cuts of each episode, which run about six minutes longer on average, though you'd be hard-pressed to notice the difference without serious effort. It's mostly bits and pieces re-introduced here and there, but you should probably start with the extended cuts if you're new to the show, simply because you get more of the series, and it works great either way.

Up next is a fun blooper reel that runs over eight minutes long, featuring screw-ups, often resulting from improv attempts, which makes for some healthy on-set laughs. Nine deleted scenes running nearly 10 minutes in length follow, through much of this is extended material, rather than deleted content. There's even more "deleted" footage, 6:38 in all, in the "Alt Nation" segment, with alternate joke takes, mostly from Kroll, which are frequently quite funny.

The rest of the extras are either extended versions of footage seen on the show, or bits that relate to the show, like Taco's "Three Penis Wine" commercial or his twisted kids show "Mr. McGibblets Fun House and Dojo," which work well for the character. There are also videos for "Vaginal Hubris," one of many funny songs he sings, like "Birthday Song" and "Legalize Kevin's Public Smoke," which are also included. The clip parade wraps with "Andre: Dress with Style, Win with Style," a six-minute tag-along while Andre takes his bad taste shopping for clothes and displays his distinct lack of self-awareness.

The extras finish with the pilot episode of another FX series, the animated Archer, a promotional throw-in for anyone who hasn't seen that show.

The Bottom Line
Between Archer, Louie and It's Always Sunny in Philadelphia, FX has quickly become a go-to location for edgy comedy, and The League is one of the best the network has, hiding a great sitcom about friends under the guise of a fantasy football series, giving people on both sides of the divide something to enjoy. The Blu-Ray looks great and sounds pretty good, and offers up a decent amount of extras, as well as extended episodes for fans, but with just six episodes, it's a bit short for the cost.