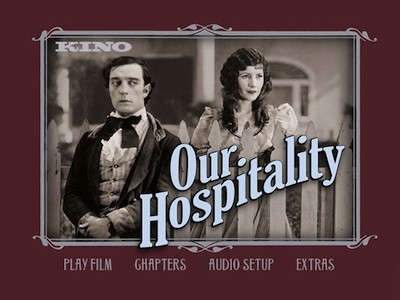 Buster Keaton's 1923 silent film Our Hospitality is a comic treat that hasn't lost any of its laughs despite being nearly a century old. Quite the contrary, actually, when you keep in mind how this movie was made long before digital effects, and the incredible stunt work was true and actual. Buster Keaton would literally go out on a limb to make you laugh. Literally. Check the trivia. A stray tree branch barely kept him from drowning, a risk he took to bring you the funny.

The basic plot of Our Hospitality plays with the old cliché of feuding Southern families. In this case, it's the Canfields vs. the McKays, a slight turn on the Hatfields and McCoys. Starting out in the early 1800s, young Willie McKay (played by Keaton's one-year-old son) is shipped off to New York just after he is born when the Canfields murder his father. The hope is that Willie can stay far away from the feud destroying his family. Except twenty years later, he is called back home to claim his inheritance. A train ride full of mishaps follows, with Willie sharing his coach with a lovely young woman (Natalie Talmadge) who captures his heart.

Of course, what Willie doesn't know is that the girl is really a Canfield, and when they learn that a McKay has dared shown his face on their turf, her father and brothers make it their mission to kill the unwitting city boy. The title of the film comes from the fact that Southern manners won't permit the men to murder Willie while he's a guest in their home, leading to a series of hilarious set-ups where the Canfields wait for their enemy to step foot outside their door so they can show him the true nature of their "hospitality."

Keaton is a gifted comic talent, having earned the nickname "the Great Stone Face" for his tendency to maintain the same hound-dog expression regardless of the peril. Our Hospitality offers a series of sight gags and clever concepts. The trip across country, riding the rails on a train ingeniously comprised of modified stagecoaches, offers numerous opportunities for funny derailments, while the final third of the film is given over to one large chase, with Keaton doing whatever he can to stay ahead of his pursuers. This leads to several large stunt routines, which were Keaton's signature. He climbs across cliffside rocks, dives into rivers, and even hangs over a waterfall. Though the actor/director's timing is impeccable and his planning meticulous, accidents still happened, and since they were better left in and used in the final cut than dare another take, add to the excitement. Notice the incredible catch Keaton makes when Talmadge goes over the waterfall, and how when they hang over the chasm, he unintentionally swings her back into the downpour. Never mind that they were on an elaborate set of Keaton's own design, that looks like it had to be scary.

Though today's cinematic comedy is usually more about one-liners and zingers than sight gags--just watch the outtakes on any Judd Apatow-produced DVD to see how much verbiage drives those movies--that doesn't mean Our Hospitality is out of step or less expressive. On the contrary, Our Hospitality should impress all the more by how much Keaton gets across with very little "story" and virtually no word-based jokes (I suppose he could have slipped some puns into the title cards). Effectively using the persona he has cultivated, the comedian inspires sympathy and gives the audience plenty to invest in. He's a hero you can root for, maybe precisely because he gives you something to laugh at, but also because his perseverance in the face of bullies and the other cruelties of life is laudably identifiable. He's a clown, but one that never stops getting up no matter how many times he's knocked down. You kind of want to give the guy a hug every time he beats the odds...and then trip him when he walks away, just so you can laugh some more. It's those big eyes and unbending frown, his pain is our pleasure. 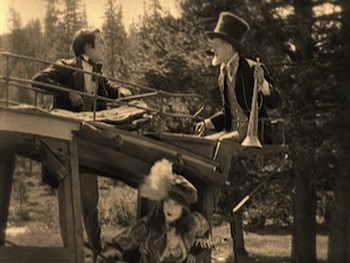 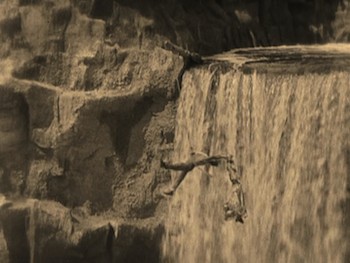 Video:
This new release of Our Hospitality, which is also out on Blu-Ray, is subtitled the Ultimate Edition. The full frame 1.33:1 transfer has been upgraded for new technology, and while some scenes still have scratches and other damage, it's a fairly remarkable restoration. The image is mostly clear and free of jumpy edits. The picture is tinted in sepia, but there is also some blue (usually to indicate night). Title cards are the original versions and look good and are easy to read.

Sound:
Kino makes available two different choices for the score for Our Hospitality. A new composition by Carl Davis and played by the Thames Silent Orchestra is offered in both 5.1 and 2.0 Stereo. It is the default choice, and it provides excellent accompaniment to the onscreen antics. The 5.1, naturally, sounds more full and has more oomph than the 2.0 version. The alternate score is put together by Donald Hunsberger and presented in 2.0. It seems to be more traditionally comedic, whereas Davis goes for the bigger orchestral sound. It's up to you which you prefer, I think you'd do fine with either.

Extras:
Of particular note in the extensive extras on the Our Hospitality: Ultimate Edition is a shorter version of the movie (49 minutes, versus 75 minutes) that also has a shortened title: Hospitality. Presented here with an introduction and organ-based score by Lee Erwin, though the print is badly damaged, it is still worth checking out to see what may be an early work-in-progress version of the well-known movie, put together while Keaton was still working out what the final product would be like.

Another excellent inclusion is the Fatty Arbuckle short The Iron Mule, which not only famously reused Keaton's train from Our Hospitality, but featured the actor in a small role. It's very funny, and works as a great companion to the main feature. It has a score by Ben Model.

Finally, the Ultimate Edition peels back the curtain on Our Hospitality, offering viewers both a half-hour documentary on the making of the movie and two photo galleries.

These extras are all the same as what comes in the Blu-Ray package.

FINAL THOUGHTS:
Highly Recommended. There is no greater compliment that a reviewer can pay a comedy than saying, "I laughed hard and I laughed often." No surprise, I did both while watching the Our Hospitality: Ultimate Edition DVD. Buster Keaton is a genius, 'nuff said, and the new package from Kino presents one of his finest films just right, with a cleaned-up video image and a bunch of great extras. You're going to have some fun with this one, guaranteed. 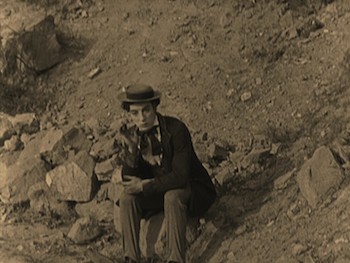 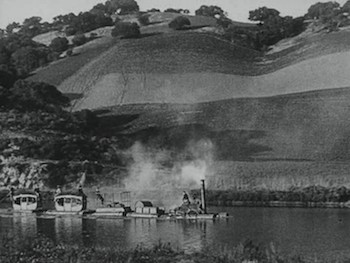 left to right: Keaton in Our Hospitality; his train in The Iron Mule.