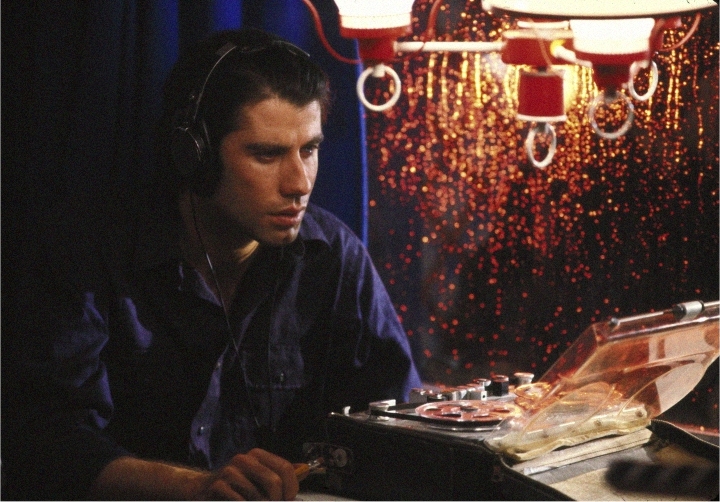 Image courtesy of The Criterion Collection

Brian De Palma's Blow Out is 30 years old, and it very well may have been released at the worst possible time...or the perfect time, depending on one's point of view. Written as a delayed but direct response to the Kennedy assassination, Watergate and other blemishes on the world of American politics, it also reminds viewers that political scandals---and their ensuing investigations---drift out of the public's interest very quickly. To make matters worse, those who continue such investigations privately are often dismissed as conspiracy theorists, crackpots or both. Blow Out's "crackpot" is Jack Terry (John Travolta), a sound man for a low-rent Philadelphia studio that specializes in awful slasher movies. During a late-night outdoor recording session, Jack inadvertently bears witness to a horrific car accident---and with the tape recorder still running, he captures a piece of history that no one was supposed to hear. The car's two passengers are a well-respected governor and a young woman, Sally (Nancy Allen), who isn't his wife. Only the latter survives the accident, thanks to Jack's quick thinking...but the story doesn't end there, not by a long shot.

It doesn't take long for Jack to realize what's going on: the governor's team doesn't want the press to learn about their late boss's affair, but that's not the real issue. Jack's recording also reveals some rather suspicious things before the accident, including what sounds like a gun shot. Once another man, Manny Karp (Dennis Franz) comes forward with an actual filmed recording of the very same accident, Jack's suspicions grow to feverish heights. All the while, a mysterious figure is killing young women as the city's Liberty Day celebration draws near, and Jack's attempts to speak to the press may not prove to be as fruitful as he hopes.

Jack and Sally are an odd but likable pairing, separated by their levels of dedication but united by their involvement in this horrific tragedy. She dreams of being in movies as a makeup artist, but she's stuck behind a sales counter when not taking questionable jobs on the side. So while Sally's best days---though seemingly unreachable---may still lie ahead of her, Jack's are apparently behind him. Once a respected member of law enforcement until a wiretapping assignment went awry, he's apparently stuck in his current position until something else comes along. Once this bombshell drops in his lap, it's no wonder why he runs with it...and why Sally eventually follows his lead. After all, nothing fuels an obsession like two dead-end jobs.

De Palma's blistering film offers much more than your average thriller: it's a visual tour-de-force, a part-time black comedy and a once-small film that grew exponentially as it developed. Inspired by Michelangelo Antonioni's 1966 film Blowup, this tightly-wound production remains a lesser-seen gem that fans of De Palma should enjoy digging up (or revisiting, of course). Originally released on DVD by MGM all the way back in 2001, Blow Out has been granted a substantial upgrade by the fine folks at Criterion...and it's also available on Blu-Ray, which is the subject of today's review. Pairing a top-notch technical presentation with a fine assortment of extras, Blow Out is a perfectly well-rounded release from top to bottom.

Presented in its original 2.40:1 aspect ratio, this 1080p transfer of Blow Out looks excellent from start to finish. Supervised by director Brian De Palma, the only (incredibly minor) problems stem from the source material itself. There's a wonderfully thick layer of film grain over much of the image, detail is remarkable and the film's vivid, stylish color palette shines through nicely. Several outdoor scenes and close-ups absolutely sparkle with clarity. Digital problems (including compression artifacts, edge enhancement and ghosting), as well as dirt and debris, are all practically non-existent. Here's the bottom line: Blow Out is a carefully-crafted film with a clear attention to detail, and this Blu-Ray does everything possible to maintain its visual spirit.

As expected from a film based around audio recording, the DTS-HD 2.0 Surround mix also has no problem pulling its own weight. Dialogue and background noises---especially those featured during several of Jack Terry's "recording sessions"---are crisp and directionally accurate, creating a truly enveloping sense of atmosphere from start to finish. On more than one occasion, viewers will swear that certain sounds are happening just outside their window...providing they live in or near a city, of course. Pino Donaggio's unique score is yet another highlight, rarely fighting for attention with dialogue and other effects. Optional English SDH subtitles are not listed anywhere on the packaging or menu screens, but they're offered during the main feature only. 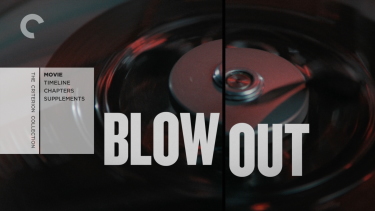 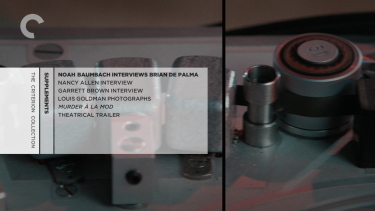 Seen above, the basic menu screens provide smooth, simple navigation. The 108-minute film is divided into 16 chapters (17, counting the color bars) and no obvious layer change was detecting during playback. This single-disc release is locked for Region "A" players only and is housed in a Blu-Ray sized clear keepcase with attractive double-sided artwork. A handsome booklet is also tucked inside, which includes an essay by film critic Michael Sragow and a vintage New Yorker review by Pauline Kael.

Bonus Features
A nice collection of extras is also here, even if they seem a little "cold" on paper. First up is a trio of newly-recorded Video Interviews with some of the folks responsible for Blow Out. Director Brian De Palma is up first (57:48), and he speaks at length with filmmaker Noah Baumbach about the film's inception, production, visual style and the films it's influenced over the years. Baumbach is candid and does a fine job of keeping things moving, while De Palma is extremely frank about many of the subjects at hand. This isn't quite on the level of a feature-length audio commentary, but it's close enough.

Next up is actress Nancy Allen (25:25), who was De Palma's wife at the time and also has no problem recounting several interesting production stories and discussing her approach to Sally's character. Like the former interview, this comes across as very honest---and while there's a notable amount of back-patting on display here, fans should enjoy it.

Last up is cameraman Garrett Brown, who invented the Steadicam some five years earlier and used it while filming Coed Frenzy (the "movie within a movie" seen during Blow Out's opening scene). This is slightly different in tone than the other two interviews, as Brown gives us a hands-on demo of the technology before discussing his experiences on the set...which, interestingly enough, took place immediately after his work on The Shining. Overall, this is a great close to a satisfying trio of chats.

Moving on, we're also treated to a short Photo Gallery of images by late photographer Louis Goldman. These on-set images are in great shape and feature several promotional images as well as a few candid shots.

Our next extra is a surprising one: a feature-length Bonus Film directed by De Palma, entitled Murder à la Mod (1967, 80:23). This experimental black-and-while film was only released to one theater in NYC and was subsequently thought to be lost until its re-discovery in 2006. Another interesting note: Manny Karp (Dennis Franz's character in Blow Out) can be seen watching this during the main feature...but unlike that version, this has been beautifully remastered and is presented in its complete form. As for the film itself, it's...um...interesting. I can't say I was enthralled, but this is still a nice keepsake for De Palma fanatics.

Our last extra is the film's Theatrical Trailer, presented in slightly rough shape and cropped to 1.85:1. All bonus features are presented in 1080p, but none include optional captions or subtitles (a surprising trend from an otherwise consistent company).

Blow Out is unquestionably a fantastic film that, commercially and (perhaps) critically, was released at the wrong time. In the last 30 years, however, it's aged remarkably well and stands as an underrated career highlight for all those involved. Combining equal parts paranoia thriller, black comedy and tragic love story, Blow Out should enthrall those new to the film and delight those that haven't seen it in years. Criterion's Blu-Ray does a perfect job of maintaining the film's tone and spirit, pairing a rock-solid technical presentation with a handful of thoughtful, appropriate bonus features. While it's a bit on the pricey side (even for a Criterion disc), Blow Out is a top-tier effort and this Blu-Ray is worth every penny. Very Highly Recommended. 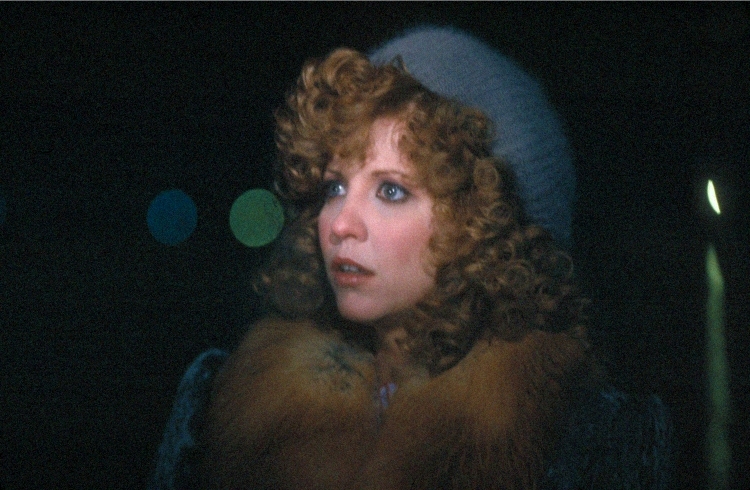 Image courtesy of The Criterion Collection
Randy Miller III is an affable office monkey based in Harrisburg, PA. He also does freelance graphic design projects, teaches art classes at a local gallery and runs a website or two in his spare time. He also enjoys slacking off, telling lame jokes and writing stuff in third person.