White Material, the latest film from French director Claire Denis, is an elusive, yet intriguing drama about social privilege, personal passion, and the delusions and myopia born out of each. The script, co-written by Denis and Marie NDiaye, uses real-world locations and timely political problems to create an otherworldly narrative, one that takes what is familiar and holds it close even as it smuggles these elements into a place totally separate from any logic we may recognize.

The great Isabelle Huppert stars as Maria Vial, a French citizen living in Africa. She and her husband have been running a coffee plantation for several years, and they have apparently lived on the continent for longer. It's harvest time for their struggling business, but a civil war has caused all of their workers to run off scared. The French government is also pulling out of the region and is encouraging its citizens to do the same. Maria's husband, André (Christopher Lambert), would rather cut his losses and go, even going so far as trying to strike a deal with the local "mayor," Chérif (William Nadylam), to take the land off his hands. Chérif is forming a militia to fight the incoming rebels. This ragtag bunch seems no more or less thuggish than the government soldiers. It's hard to tell which side is which.

Maria sticks to her belief that she can get through this, and much of White Material is about her resisting all urgings to stop and finding other workers to replace the ones who left. She is stubborn to any argument that doesn't jibe with her own belief of how things are going, a character flaw she extends to her son, Manuel (Nicolas Duvauchelle). Everyone sees that the teenager is a deadbeat--he spends the first half of the movie locked in his bedroom, refusing to come out--but Maria refuses to hear a negative word said about him. This is a mother's prerogative, I suppose; by extension, she is also mother of the coffee she has been growing, the matriarch of this homestead. She won't give up on her children no matter what.

Not even when the rebellion has come through her front gate. The most notorious rebel figure is an enforcer (Isaach de Bankolé) talked about in hushed whispers, either out of fear or awe depending on who you're with. They call him the Boxer, and his wanted posters are large murals painted on the sides of buildings. He is depicted with a belt of machine gun bullets draped over his chest and posed as readying to throw a punch. The image we get of him is different: he is wounded and nearly incapacitated, seemingly only carrying on via an ice-cold determination to not be beaten. He levels no threats at Maria--he doesn't have to.

White Material unfolds according to its own internal rationale. Though not exactly plotless, it does not conform to any textbook screenplay outline. Its main drive is for its characters to beat the amorphous deadline that hangs over the war-torn region. Maria must harvest her coffee before the government army comes sweeping through the town, before the Boxer rises up with his rebel soldiers--many of whom are children--to battle for dominance. Denis cuts her film to the flow of dark, ambient rhythms. The music for White Material was composed by the Tindersticks, whose morose melodies have become a staple of her work. These sinister soundscapes trade airtime with revolutionary-themed reggae music, records spun by a local radio DJ between coded messages to citizens and freedom fighters. He joins a tradition of cinematic AM/FM instigators that includes Super Soul in Vanishing Point and Mister Señor Love Daddy in Do the Right Thing. And, of course, real-world wartime propagandists like Tokyo Rose and Hanoi Hannah.

The more desperate the situation becomes, the more determined Maria is to finish the job. She hides threats sent to her by unseen enemies and lies to her new workforce. In direct relation to this, Manuel goes further off the deep end, though his intentions aren't clear at first and his true motives are surprising. Essentially, you can't beat them all, so you have to join somebody. The less that Maria can get others to do, the more control wrested from her hands, the harder she pushes back. It takes a tremendous emotional toll on her, and Huppert tip toes around this woman's psychosis so as not to make her seem overly crazy or even all that unreasonable. While she does possess a manic energy, there is a calmness to her single-minded mission that gives her balance. At times, we think that maybe she really can pull this off.

But, alas, good intentions disappear in the miasma. As White Material moves toward its climax, the mis-en-scene becomes more choppy, the storytelling more intentionally muddled. The whole region is losing its mind and collapsing in on itself, and so we aren't supposed to know exactly who is doing what to whom. To preserve her isolation, Maria has given over to the savagery that she has been rejecting, and there is no telling what is next for her. A fog doesn't literally roll in, but smoke from a burning fire does add a visual facet to the cloudy metaphor. The conclusion of White Material has an element of the unknowable. Denis is more concerned with the impression it will leave than your literal translation of what you have seen. The haze may not clear, and that may be exactly the point: you can flee these kinds of crises, but they will still be there, never going away. 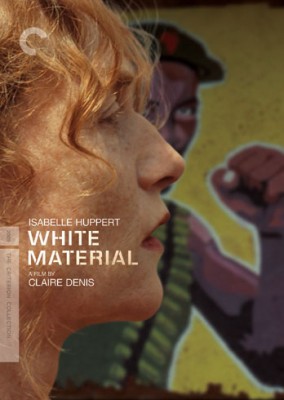 Video:
White Material is released on Blu-Ray in North America by Criterion, and they have worked with Denis and cinematographer Yves Cape to create a 1080p high-definition transfer that would best capture their original intentions. The 2.35:1 widescreen picture looks excellent, with lots of fine details. Note the clarity, for instance, when Maria is sifting through the harvested beans, how the individual seeds look and the contrast between their red and green original color and the light brown after they have been shelled. Skin tones look excellent, rendering wonderful flesh textures in close-up. Colors have beautiful, natural tones throughout--it's a wonderful presentation.

Sound:
The original French audio gets an exceptional DTS-HD Master Audio 5.1 mix here. There is a lot of subtle ambient noise in White Material, and the soundtrack provided moves them around and creates a real sense of space. Music creeps in with the appropriate menace, and dialogue all sounds clear and natural. Optional English subtitles are written well and paced so they are easy to read.

Extras:
White Material comes in a standard case with the usual booklet featuring photos, credits, and an essay by Amy Taubin.

Criterion has nearly an hour of exclusive interviews, with the longest segment being with Claire Denis and equal-length videos for Isabelle Huppert and Isaach de Bankolé (the latter being in English). These are informative pieces, with the director and her actors talking about the making of the film, providing insight into the production that seems honest and doesn't have the stink of whitewash most mainstream discs have. Fan of the Denis film Chocolat will find it interesting to hear the connections between the two films, in that they both were in Cameroon and the influence this history of the region had on White Material.

"Ecrans Noirs Film Festival, 2010" is a short documentary (just under 15 minutes) about Denis and her return to Cameroon, where the movie was shot, to show it at the film festival there and present it to the local cast and crew for the first time. It's an interesting set-up, since Cameroon doesn't have any movie theatres. Denis shot and narrates the short.

One short deleted scene adds a little more to a story element from the movie, which I won't detail so as not to spoil the plot point in the main feature. There is also a theatrical trailer.

FINAL THOUGHTS:
Highly Recommended. White Material is a haunting production from French director Claire Denis. A talented ensemble cast, lead by Isabelle Huppert, portray a fractured group of people vying for dominance in a small African country. Mulitple lives move around one another and intersect in a sometimes dangerous dance, each character driven by his or her own personal emotions and goals--and in the case of Huppert, too driven, too caught up in her own thing, to see the hazards that move all around her. It's an unconventional drama, but one with lingering effects, making White Material a film you'll want to revisit often.