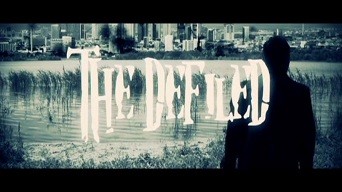 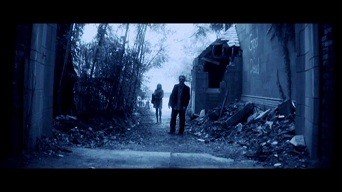 The ever-present zombie subgenre of horror films has seen quite a few variations over the decades. From the slavery motif of the Bela Lugosi classic White Zombie to the consumerism metaphor of George Romero's Dawn of the Dead, not to mention modern day accounts like the truly horrific 28 Days Later and the truly comic Shaun of the Dead, one would have thought the undead have been done to death cinematically (apologies for the unwarranted bad pun - you didn't deserve that, faithful reader).

However, I have to confess, I've never seen anything quite like Julian Grant's contemporary take on this genre titled The Defiled. Apparently a homage to George Romero's legendary black and white Night of the Living Dead, the black and white (with a blue tint) The Defiled explores a bleak postapocalyptic world overrun with the living dead from the undead's perspective. Yes, that's right, the entire 100-minute film follows a zombie character portrayed by actor Brian Shaw (in makeup that hearkens back to the Romero films) as he attempts to survive in the woods, evading patrols from human soldiers the entire time. The Defiled has no discernable dialogue - only the grunts of zombies. It could easily have been a silent film, especially considering David Findley's score resembles the type of music one hears accompanying old films from the 1920's.

And strangely, The Defiled works. I thought to myself while watching it that this could almost be a prime candidate for a revival of Mystery Science Theater 3000 - almost. Following our zombie character as he attempts to care for his infant child (born near the beginning of the movie), he (it?) forages for food as best he can, stealing eggs from a bird's nest and killing squirrels to survive. Inexplicably, the zombie saves a human woman played by actress Kathleen Lawlor, who never says a word but follows him to help care for the infant. In many ways, it's an absurd conceit, and it could certainly be made fun of. After all, Mike Nelson and his RiffTrax crew have taken on such horror classics as the aforementioned Night of the Living Dead and Carnival of Souls.

But for as absurd as the concept and execution are, it really does work. The Defiled cleverly operates on a visual level to tell its story effectively. The two main actors are quite good at portraying emotion and meaning physically in a natural way that isn't overwrought with melodrama. Despite being filmed in 2010, the black-and-white cinematography evokes a different age, adding a dreamlike veneer to the goings-on. Filmed in Indiana, Grant's low budget opus utilizes forests and abandoned buildings to create a dying world surprisingly well.

The Defiled is by no means perfect. At 100 minutes, it runs a bit too long, overstaying its welcome. Perhaps a good 10 - 15 minutes could have been trimmed to better its pace. I'm also not sure how large of an audience there is that would want to watch this - it is a very unusual production and my own response to it was similar to when I saw David Lynch's truly bizarre Eraserhead for the first time (by the way, that film also had a not-quite-human baby in it). And, frankly, some could view it as just plain silly. However, horror fans and those cinephiles seeking something truly off the beaten path will find a lot to like with this little film. Highly recommended, especially since Chemical Burn Entertainment was surprisingly generous with their extras (more on these later in the review). 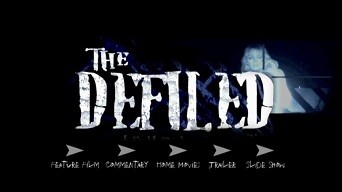 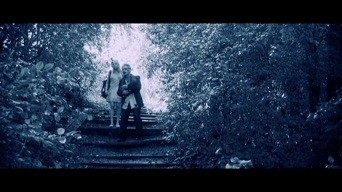 Chemical Burn Entertainment gives The Defiled an anamorphic widescreen presentation. Director Julian Grant shot the movie in black and white; the vast majority of the film is given a blue tint - although there is a flash of red/orange in one scene. Details are lacking.

A simple stereo audio track is the only option here - and that's plenty given the lack of true dialogue and persistent silent-film styled score. No optional subtitles are provided.

In addition, Slide Show (3:25) offers stills from the movie set to a selection from the score. Home Movies (1:21) appears to be test footage shot at someone's home - a little context for this would have been helpful. And, finally, the disc also has a trailer for The Defiled. Considering the low budget of and limited audience for this film, that's actually an impressive collection of extras.

The Defiled is truly a unique little low budget experiment: a dialogue-less black-and-white zombie film told from the zombie's perspective. The audience is admittedly limited for this foray into the unusual, but I give writer / director Julian Grant a lot of credit for pulling off something novel. Highly recommended to horror hounds and those cinephiles who like their films off the beaten track.