Other // Unrated // February 15, 2011
List Price: $15.99 [Buy now and save at Amazon]
Review by Stuart Galbraith IV | posted February 27, 2011 | E-mail the Author
Long in the public domain, Orson Welles's The Stranger (1946) is widely available on myriad home video labels, and it was inevitable that, sooner or later, it would turn up on Blu-ray as well. I recently reviewed Film Chest Inc.'s new Blu-ray of another public domain title, Kansas City Confidential, and while the transfer on that was at least okay, not great but perfectly watchable even on big screen TVs, The Stranger is another story. Though reportedly sourced from a 35mm print, the image is extremely soft and dupey.

As with Kansas City Confidential, MGM seems to own the best surviving picture and sound elements. I've not seen their official DVD release, but when I was under contract with them I did attend a screening of a new 35mm print they struck, and it looked perfectly fine, far sharper than this Blu-ray release, so it may very well be that the standard-def DVD release from MGM has to the naked eye much better definition than the 1080p Film Chest version.

The film is famous as Welles's only big commercial success yet, contrastingly, also his most ordinary. Having already seen it four or five times through the years, I wasn't sure if I was really ready to watch it yet again, but it's a story so superbly told and with a typically excellent central performance by Edward G. Robinson that I ended up running it all the way through without a break. 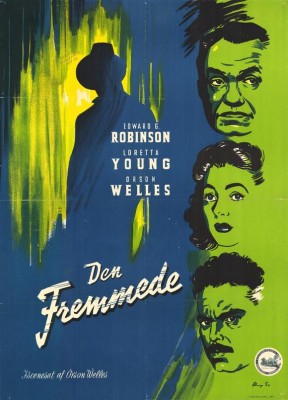 Just after the war, Nazi hunter Wilson (Robinson), working with the United Nations War Crimes Commission, frees Nazi Konrad Meinike (Konstantin Shayne) hoping that the now fanatically religious war criminal will lead him to Franz Kindler, one of the architects of the Holocaust.

Threatened by Meinike's sudden appearance, Rankin brutally murders his former associate and, between the wedding ceremony and the reception, buries him in a nearby forest. Nevertheless, Wilson, pretending to be an antiques dealer and historian, begins to suspect Rankin may be Kindler following Rankin's off-handed remarks over dinner: "Well," Wilson says, "Who but a Nazi would deny that Karl Marx was a German ... because he was a Jew?" Further, Mary's spaniel begins sniffing around Meinike's shallow grave.

The Stranger is mostly unexceptional Welles but superb as noir. Despite a few Wellesian set pieces, most involving the Harper's intricate clock tower though also Meinike's flight in the picture's opening scenes, the bulk of the film is shot in an efficient but fairly ordinary manner. Russell Metty, who also shot Welles's more imaginative and original Touch of Evil (1958), does a fine job here though it's a bit hard to tell because the image is so mediocre. During this period Welles seemed to favor extremely harsh lighting; look at the shadows even at Mr. Potter's (Billy House) drugstore. It's a unique look very similar to Welles's The Magnificent Ambersons (1942) and, to a lesser extent, The Lady from Shanghai (1948). Even in the light of day, a cold noirish chill runs through Harper's center. The authentic-looking town was in fact a backlot set built off of Santa Monica Boulevard in Hollywood. You'd never know it.

Instead, Welles seems to have concentrated his energies on the performances, which are very good to superb. Not that Robinson needing much coaching. Similar to his claims adjuster character from Double Indemnity (1944), Robinson's methodical, low-key and sociable Wilson is utterly engrossing to watch, even in superficially mundane scenes like his checker games with Mr. Potter (an amusing small-town characterization). Welles reportedly wanted Agnes Morehead - whom he called "the greatest actress in the world" in Citizen Kane's trailer - to play Wilson but he couldn't have done better than Robinson.

Welles is also good as Rankin, though he telegraphs his nefarious plotting a bit too obviously when he should be more charming and slippery. Young is also fine though Shayne, in a role that seems originally designed for another Welles regular, Everett Sloane, and House, in a rascally portrayal, have more colorful roles.

The film is also notable as the first Hollywood feature to include actual footage from the Nazi concentration camps. Very little is shown - Stanley Kramer's Judgment at Nuremberg (1961) is far more graphic - but the brief clips must still have shocked war-weary audiences. One also can't help but wonder about the impact of the film and his character on actor Robinson, a Bucharest-born Jew.*

As stated above - You did read the whole review, didn't you? - while "original 35mm elements" might well have been sourced for this release (though I doubt it, it looks like a print, and not a nitrate one at that), they're quite soft and dupey, weaker than MGM's standard-def DVD, at least based on the frame-grabs I've seen. The audio, in both mono and remixed for 5.1 surround, has its share of noisy and dirt-related crackles, but is okay. Optional Spanish subtitles are available. Also included is a region-free standard-def DVD version of the film in full-frame 4:3 format. The Blu-ray is region "A" encoded.

Besides the "Before & After Restoration Demo," probably not such a good idea in this case, the Blu-ray disc includes what it calls a trailer but is anything but; it's just a trailer-like collection of quick cuts from the film created for this release, with no text or narration. Also included is a postcard insert, with artwork identical to the Blu-ray's cover art.

Based on the 35mm print I saw while at MGM and frame-grab comparisons between the MGM DVD and this Blu-ray, I'd say MGM's official (and less expensive) DVD is still the best way to see The Stranger. The movie is very good, but as Blu-rays of classic black-and-white films go, this release is near the bottom of the barrel. Skip It.

* Sergei Hasenecz rightly notes, "Robinson must have felt the impact early on, because he appeared in Confessions of a Nazi Spy in 1939 for the Warner Brothers (also Jewish), the first US movie from a major studio to be anti-Nazi. The movie was considered to be very controversial, and it cost Warners a lot of lost revenue for their movies in Germany where Confessions was banned, as it was in many other countries. Warners and Robinson took a very brave stand in isolationist America even before the war in Europe had begun. It's what HUAC would later call 'premature anti-fascism' and was one of the reasons (along with his Judaism) for Robinson's 'graylisting' in the 1950s by a grateful nation."