Other // Unrated // February 15, 2011
List Price: $15.99 [Buy now and save at Amazon]
Review by Stuart Galbraith IV | posted February 25, 2011 | E-mail the Author
It was only a matter of time until bottom-feeder labels specializing in public domain releases - that is, movies with lapsed copyrights or never properly protected in the first place - tapped into the burgeoning Blu-ray market. Movie fans looking for bargains or titles unavailable anywhere else were pretty forgiving in the days of VHS, but as laserdisc gave way to DVD and, more recently, HD DVD and Blu-ray, and with high-definition fast-becoming the new standard, film fans are less tolerant and the future of the PD market is in doubt. DigiBeta masters of battered 16mm TV prints or, more commonly, DigiBeta masters derived from somebody else's DigiBeta masters of battered 16mm prints, just won't fly in today's more technically savvy and demanding market. Not on Blu-ray.

Nevertheless, a label called Film Chest, Inc. has unveiled its first wave of Blu-ray titles. Kansas City Confidential (1952) was copyrighted but apparently not renewed. Originally released by United Artists, its original film elements are owned by MGM, and they released a clean, official edition of the film to DVD in 2007. (And it's cheap, too. When I checked on Amazon it was just $3.98 brand-new, with used copies starting from just one penny.) It's also available on a dozen or so other labels.

To answer the big question - How does this version look? - Film Chest's Blu-ray edition is better than you'd expect though not as good as it might be. MGM had no incentive to provide Film Chest with a clone of their own high-def master (and an inside source confirms to me that they did not). What did Film Chest use? Looking at the side-by-side "Before & After Restoration Demo" (an idea obviously cribbed from Fox and their restoration comparisons), it looks like an actual 35mm print already in pretty good shape was sourced. A fair amount of clean-up was done, successfully hiding scratches and other blemishes though the print was also softened up digitally, though only very slightly. (This is a bigger issue on another Film Chest title, The Stranger.)

Overall the results are definitely superior to standard-def DVD, but this black and white, 1.37:1 release is a long way from other Blu-rays that had access to preprint film elements, e.g., Casablanca, Mutiny on the Bounty, etc. Still, for what it is this is a fairly impressive release that looks pretty good even on big screen TVs. 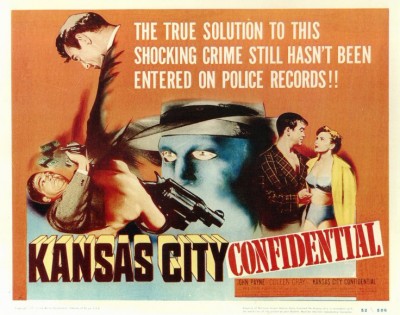 The movie itself is a crackling caper noir and an obvious influence on Quentin Taratino's Reservoir Dogs. Tim Foster (Preston Foster) - though the audience doesn't know his identity until later in the story - is a tough-as-nails late middle-aged man carefully plotting a bank heist. He enlists three hardened felons, played by three of cinema's great bad guys: wall-eyed and jumpy Pete Harris (Jack Elam), dapper if sneering and hawk-faced ladies man Tony Romano (Lee Van Cleef, wearing a bow-tie), and pock-faced brute Boyd Kane (Neville Brand). However, Tim wears a mask (similar to the Green Hornet's from the earlier movie serials) during the recruiting process and insists the others do likewise during the heist. That way no one will be able to squeal on anyone else.

(Mild Spoilers) The robbery, which involves some misdirection involving a florist's delivery van, goes like clockwork, and the robbers get away with $1.2 million. Giving each man a torn playing card for identification purposes along with some cash not from the heist to tide them over, Tim sends each man abroad until the caper blows over, promising to wire them when it's time to divide the loot. (This is the film's one colossal plot hole. What's to prevent Tim, the ringleader, from skipping town with all the dough? The others don't protest.)

Meanwhile, the real flower shop deliveryman, war hero Joe Rolfe (John Payne), is arrested and mercilessly grilled by police who've already decided the ex-con is one of the gang. (Joe spent a year in the pen after "a jam over a gambling debt.") Determined to prove his innocence, Joe follows a lead south of the border where several big plot twists await.

The film is just great, generating palpable tension from the very start (as Tim meticulously times the comings and goings in front of the bank) through the multi-layered plot twists and surprising character shifts toward the end. The title of the film is meaningless. After the opening scenes, most of the story takes place at a seaside resort in Mexico. There, Joe assumes Pete Harris's identity, and the script by Rowland Brown, Harold R. Greene, George Bruce, and Harry Essex keeps viewers on their toes trying to keep track of each character's awareness of the others' real identities. It gets pretty complicated, fascinatingly so.

The picture is also an interesting and ambitious expression of postwar anxieties. Joe was a good soldier who even saved a buddy's life on Iwo Jima, but after the war he's been plagued with nothing but bad luck: unemployment and debts, jail time, and a dead-end job delivering flowers. There's no justice in the world, with Joe the victim of police brutality while another character in the script is an unjustly disgraced cop.

Phil Karlson, who did several films with Payne after this, was a Poverty Row filmmaker who during the '50s finally got to show his stuff in a series of superlative medium-budget noirs including 5 Against the House and The Phenix City Story, before switching to top-of-the-bill but mostly bland program pictures like Kid Galahad and The Wrecking Crew.

See above for comments about the transfer. The audio, in both mono and remixed for 5.1 surround, is a bit noisy with dirt-related crackles, but otherwise is fine. Optional Spanish subtitles are available. Also included is a region-free standard-def DVD version of the film in full-frame 4:3 format. The Blu-ray is region "A" encoded.

Besides the "Before & After Restoration Demo," the disc includes what it calls a trailer but is anything but; it's just a trailer-like collection of quick cuts from the film created for this release, with no text or narration. Also included is a postcard insert, with artwork identical to the Blu-ray's cover art.

Overall I was pleasantly surprised. While no revelation the transfer is more than acceptable while the movie is outstanding. Until MGM comes along with its own official Blu-ray release sourced from the original negative (not likely anytime soon), this is Highly Recommended.